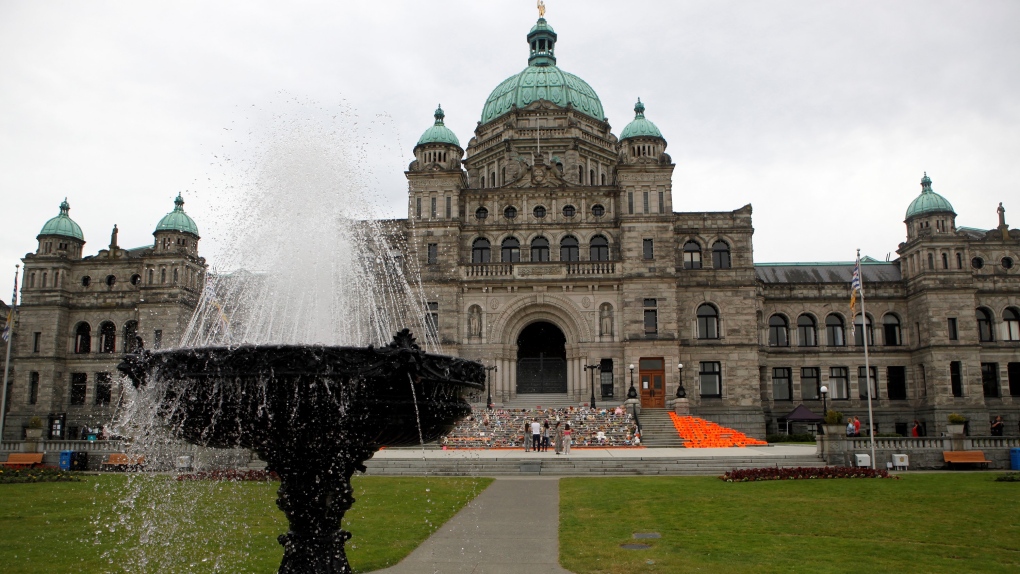 Orange shirts, shoes, flowers and messages are on display on the steps outside the legislature in Victoria, B.C., on Saturday, June 12, 2021. THE CANADIAN PRESS/Chad Hipolito

A private member's bill introduced in the British Columbia legislature last week would see the use of proper Indigenous names on provincial identification, something the government says is impossible with the current software.

If passed, Bill M209 would ensure that the numbers, symbols and characters that are part of some Indigenous names would appear on driver's licences and other forms of ID.

The teenager had written her MLA a letter about truth and reconciliation and the reclamation of Indigenous names, he said.

"It was eloquent and inspiring, and it's her passion that brought this bill here today… Thank you for that, Emme."

Clovechok, who spoke the week before the one-year anniversary of an announcement that sparked investigations across the country, said part of the residential school system was to strip children of their Indigenous names. Monday marked that anniversary. The discovery of what a First Nation believes to be the remains of hundreds of children was announced in Kamloops in May 2021.

The preliminary results of an investigation on the grounds of the former Kamloops Indian Residential School prompted similar ground-penetrating radar searches at other school grounds in Canada.

Clovechok said last week during its first reading that the bill responded to one of the 94 calls of action outlined by the Truth and Reconciliation Committee.

"The traditional names given to Indigenous children carry deep cultural meaning. Yet for many First Nation, Inuit and Métis peoples, colonialism and residential schools robbed them of these sacred names — names that are not only a symbolic issue but a matter of profound identity. They have meaning," he said.

The Liberal MLA said Indigenous applicants who've applied in the past to have their Indigenous names on their identification have been told that the current software is unable to accommodate special characters.

For example, a Vancouver couple named their child Alíla7, which means raspberry. Her parents told CTV News in March that they were trying to register her birth and her name, but that the province will not recognize the "7" as a valid character.

The girl's mother, Salia Joseph, whose ancestral name is St’ax̱í7aluts, explained the "7" is important as its distinct to the Squamish Nation, and that she didn't expect it to be a problem because it's a character "on everybody's keyboard."

But she was told it was not one of the approved special characters, and that numbers are not allowed.

"That's unacceptable. This bill will enable government to take action," he said.

The bill's first reading was May 19.

Bills before government are read a total of three times in the provincial legislature before being submitted for royal assent. Many become law after receiving royal assent, but others are not law until a later date.

At the time of the first reading, the province had already committed to implementing changes including the adoption of an inclusive digital font as part of its plan for upholding the United Nations Declaration on the Rights of Indigenous Peoples.

In its 89-point action plan, the B.C. government committed to allowing for Indigenous languages to be used in communication, signage, services and official records.