Behind closed doors, Vancouver police board to discuss handcuffing of Indigenous child, grandfather 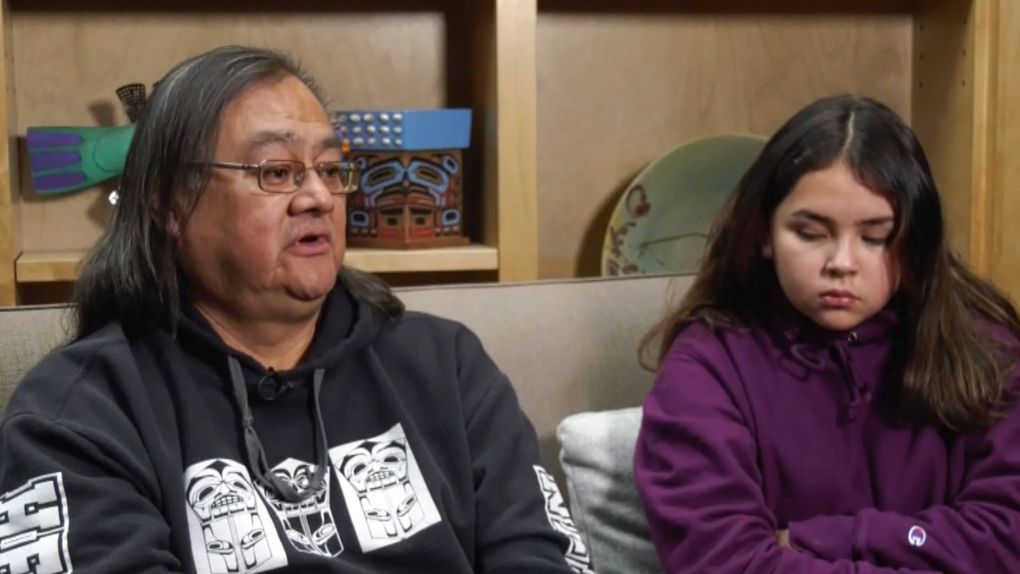 Maxwell Johnson and his granddaughter speak to CTV News about being handcuffed by police after he attempted to open a bank account for the 12-year-old girl. (CTV)

VANCOUVER -- An upcoming Vancouver Police Board meeting will be partially closed to the public as the board discusses a new provincial policy on street checks, a practice that has been criticized for disproportionately targeting Indigenous and black people in Vancouver.

The decision to close the Jan. 23 meeting to the public was made because of a recent incident in which an Indigenous man, Maxwell Johnson, and his 12-year-old granddaughter were handcuffed by police, according to a message the police board posted on twitter.

Agendas for Jan 23 mtg posted, incl VPD Street Check Policy report:https://t.co/HBzHEQMbuE. Due to the sensitive nature of the BMO incident and the ongoing OPCC investigation, the initial briefing on this subject will be closed to the public pursuant to s.69(2) of the Police Act

The grandfather and young girl were detained by police after Johnson tried to open a bank account for his granddaughter at a downtown Vancouver Bank of Montreal branch. Bank employees called police because they said they couldn't verify the pair's identification.

The Dec. 20 incident sparked intense media attention and widespread public condemnation, with many calling the incident a clear example of racism. The Office of Police Complaints Commissioner has started an investigation.

On Jan. 13, Vancouver's mayor and chair of the police board, Kennedy Stewart said he "felt sick" when he heard of the incident, and promised the police board would "be provided a detailed briefing at our next meeting where we will decide next steps, including looking at a full review and understanding the policies and procedures that led to this deeply regrettable situation."

I felt sick when I heard about how BMO staff treated a grandfather and granddaughter opening a new account at their Burrard branch. Since news broke, I have been engaged in discussions with the police board and Chief Palmer. Here is my full statement, more to come. #vanpoli pic.twitter.com/0VGNh2oN5l

Stephanie Johanssen, executive director of the Vancouver Police Board, said it would be “inappropriate to discuss the specific details of the (BMO) incident publicly” because of the OPCC investigation.

“As such the initial briefing that is taking place has been put on the Board’s in-camera agenda,” she wrote, noting the Police act allows certain subjects to be discussed in private. “However, Board action with respect to the bigger picture policy discussion and any potential reviews would be discussed in the public realm at a later date.”

Street checks are also an item on the agenda for the Jan. 23 meeting.

During a street check, a person is stopped and officers obtain and record their identification and other personal information, even though no particular offence has occurred.

Based on that over-representation, the B.C. Civil Liberties Association and the Union of B.C. Indian Chiefs submitted a complaint to the Office of Police Complaints Commissioner.

The Vancouver Police Department defends the use of street checks and says that in many cases where Indigenous women were stopped, police were checking that at-risk women were safe. Over a 10-year period, over half of the Indigenous women police stopped were the subject of a missing persons report, police said in a 2018 press release.

A 2018 internal review by the VPD found "no statistical basis" that showed police were using street checks to discriminate based on race, but recommended changes to make the policy more clear.

New provincial guidelines on street checks were issued in October 2019. Under the new policy, police office cannot stop someone based solely on "an identity factor" and "random or arbitrary stops are not permitted."

The new policy also says police must only ask for identification if they have a "justifiable reason," and they must take steps to make sure the people they stop are aware of their rights during a street check.

Police officers must also have a "specific public safety purpose to ask a person for identifying information and must inform the person of that reason."

Street checks can be stressful, the police board report acknowledges, and if people are not fully informed of their rights, they may not know that "street check interactions are voluntary."