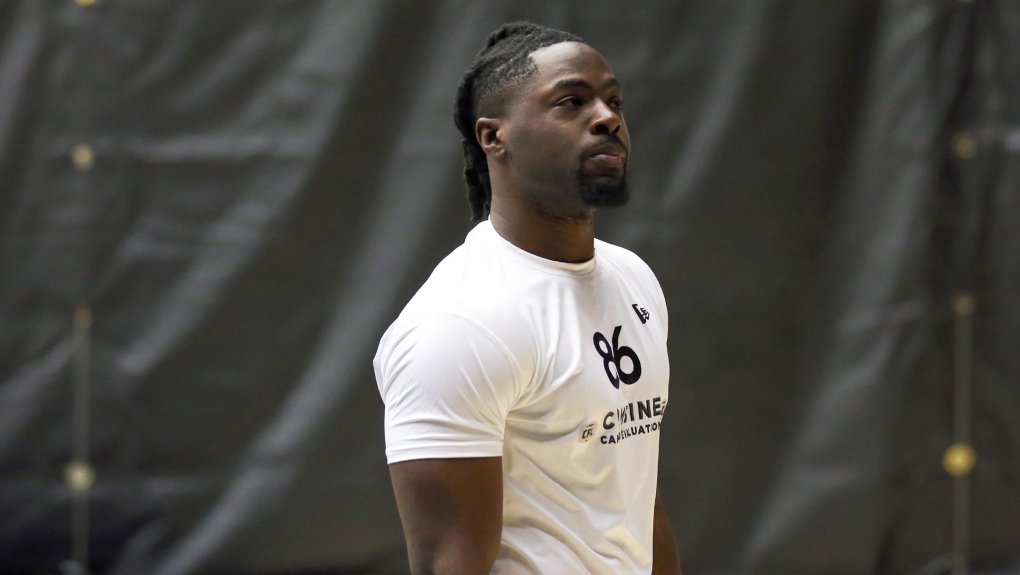 Linebacker Jordan Williams is shown in a handout photo from a CFL combine. (Chris Tanouye / CFL)

TORONTO -- The BC Lions ensured Jordan Williams began his CFL tenure with a bang.

The Lions opened the CFL draft Thursday night by moving up from No. 3 to first overall in a trade with the Calgary Stampeders. Then BC made Williams the first player taken.

"I'm absolutely surprised," the linebacker said during a conference call. "I thought the CFL is one through nine and that's what you get.

"I didn't think they'd pick me, I thought they'd get a defensive end or something. For them to take me, man, it's surreal. I can't even quantify how it feels."

The five-foot-11, 219-pound Williams hasn't played football since 2017 when he finished second in tackles at East Carolina with 89 - including three for a loss - with a forced fumble. The 27-year-old is an American by birth but was deemed a national for the draft because his mother is Canadian.

"I think once I know the rust's off, I'll be locked and loaded and ready to go," Williams said.

Last year, the Ottawa Redblacks offered Williams a practice-roster spot after he attended one of the club's free-agent camps. But upon learning of his mother's nationality, the club recommended Williams investigate taking that path into the league.

Williams shined at last month's Ontario combine, the CFL's final due to the novel coronavirus outbreak. He recorded a 40-yard dash time of 4.48 seconds, 20 reps in the 225-pound bench press, 39-inch vertical jump and broad jump of 10 feet, 8.5 inches.

BC (5-13) finished last in the West Division last season. Head coach DeVone Claybrooks was fired and replaced by Rick Campbell after he stepped down from that post with the Ottawa Redblacks.

The Toronto Argonauts then took Virginia receiver Dejon Brissett, the older brother of Toronto Raptors guard/forward Oshae Brissett second overall. And the elder Brissett, a native of Mississauga, Ont., gets to begin his pro career very close to home.

"It's surreal being home for the first time in a long time," he said. "I can't explain how excited I am."

Brissett is looking forward to joining a Toronto team coming off consecutive 4-14 campaigns after winning the '17 Grey Cup.

At No. 3, Calgary took Southeastern Louisiana defensive end Isaac Adeyemi-Berglund of Dartmouth, N.S. And while the six-foot-two, 243-pound Adeyemi-Berglund now knows where he'll begin his pro career, he still doesn't know exactly when it will begin due to the COVID-19 pandemic.

"It's always crazy when you talk about this COVID-19 thing but it's the same for every athlete," he said. "But it's crazy because we just got drafted, it's probably the biggest night of our lives according to football so it's definitely strange."

Adeyemi-Berglund registered 28 tackles for a loss and 15 sacks during his collegiate career.

The Edmonton Eskimos selected Buffalo offensive lineman Tomas Jack-Kurdyla at No. 4. The six-foot-four, 300-pound Montreal native was a four-year starter for a Bulls team that last year set schools records for most rushing yards (3,256, 296 per game) and fewest sacks (eight).

The Hamilton Tiger-Cats used the first of their two opening-round selections on Guelph offensive lineman Coulter Woodmansey at No. 5. The six-foot-five, 325-pound Toronto native plays with an edge, a solid attribute for a franchise coming off a club-record 15 regular-season wins last year.

The Ottawa Redblacks (league-worst 3-15 record) followed by taking versatile Adam Auclair of Laval. The six-foot-two, 205-pound Auclair, whose brother, Antony, is a tight end with the NFL's Tampa Bay Buccaneers, can play linebacker or in the secondary and contribute on special teams.

Toronto completed the first round with its second selection, Regina offensive lineman Theren Churchill at No. 9. The six-foot-six, 295-pound native of Stettler, Alta., made 25 career starts at right tackle for the Rams.

The Redblacks opened the second taking Brown defensive lineman Michael Hoecht at No. 10 overall. But they'll have to wait as the six-foot-four, 310-pound Oakville, Ont., native signed as an undrafted free agent with the NFL's Los Angeles Rams.

At No. 12, Calgary took British Columbia receiver Trivel Pinto, who was suspended for two years and bumped from the '19 draft after a positive cocaine test. The Toronto native was a first-team All-Canadian for a second straight season in 2018, setting a Canada West record with 67 catches for 916 yards and six TDs.

The Alouettes look to the future with their first selection, taking Montreal Carabins defensive back Marc-Antoine Dequoy at No. 14. He signed as an undrafted free agent with the Green Bay Packers.

BC then made Nathan Rourke of Oakville, Ont., the first quarterback taken at No. 15. That's the highest for a Canadian at that position since '01 when Montreal selected former Florida star Jesse Palmer.

The six-foot-two, 209-pound Rourke completed 200-of-328 passes for 2,820 yards with 20 TDs and five interceptions last season at Ohio University while rushing for 867 yards (5.6-yard average) with 13 touchdowns. It will be a homecoming of sorts for Rourke, who has family in Vancouver and Powell River, BC

The Grey Cup-champion Winnipeg Blue Bombers made their first pick of the draft at No. 18, taking McMaster defensive back Noah Hallett. He joins his brother, Nick, also a defensive back who was a '19 seventh-round pick.

With kicker/punter Lirim Hajrullahu now a Los Angeles Ram, Hamilton took UCLA kicker J.J. Molson in the seventh round. A grandson of former Montreal Canadiens owner J. David Molson and cousin of current owner Geoff Molson, the native of Sainte-Anne-de-Bellevue, Que., made 51-of-74 field goals (69 per cent) but was just 1-of-6 from 50 yards or longer with the Bruins.

This report by The Canadian Press was first published April 30, 2020.