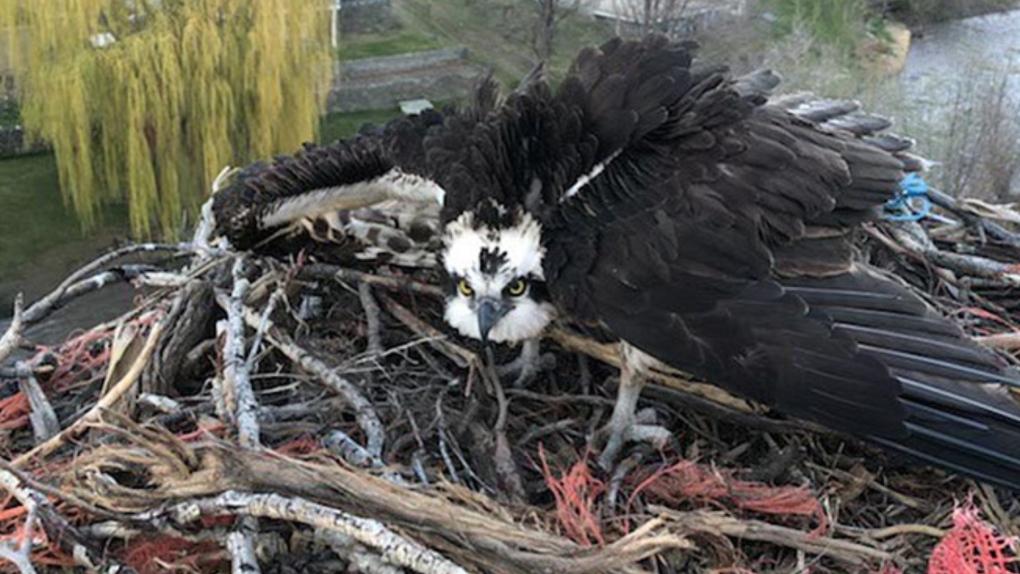 A rescued osprey looks back at BC Hydro power line technician Greg Hiltz after being placed back in its nest. The bird was rescued by a BC Hydro crew near Ashcroft after it was found dangling from baling wire on a nearby power pole. (Greg Hiltz/BC Hydro)

VANCOUVER -- An osprey is recovering at a wildlife park in B.C.'s Interior after spending hours stuck dangling from a hydro pole earlier this month.

BC Hydro crews spent about two hours rescuing the bird, which had become trapped in baling wire that it likely picked up from a nearby farm, according to a post on the utility company's website.

The osprey was dangling by its leg from a pole alongside the Bonaparte River near Ashcroft, B.C., the hydro company said.

BC Hydro believes the bird picked up the wire for use in a nest it was building on a nearby platform, which the company had built to deter birds from building their nests directly on hydro poles.

Hydro workers Greg Hiltz and Zac McKee used a bucket truck to get close to the bird and worked together to untangle it, according to the company.

Crews are often called to rescue animals from utility poles, though usually it's "adventurous cats" that get stuck, not birds of prey, BC Hydro said in its post.

McKee used an old raincoat to wrap the bird and hold it still while Hiltz worked to remove the wire from its leg.

"The challenge is to not get bitten by the bird and to wrap it up without hurting it," Hiltz said in the story on the utility company's website. "Electrically, we were safe because we had everything de-energized around it."

Once they had untangled the animal, the crew had to decide what to do with it.

"The osprey had obviously injured its leg, but it didn't appear to be broken," said Hiltz. "We gave the leg it had been hung up on a gentle tug, and the bird didn't flinch. And you know how a broken bone feels like. So, we made our best guess and decided to take it back to its nest."

The day after the rescue, the osprey was found struggling near the river and was taken to BC Wildlife Park in Kamloops for medical care, if necessary, BC Hydro said.