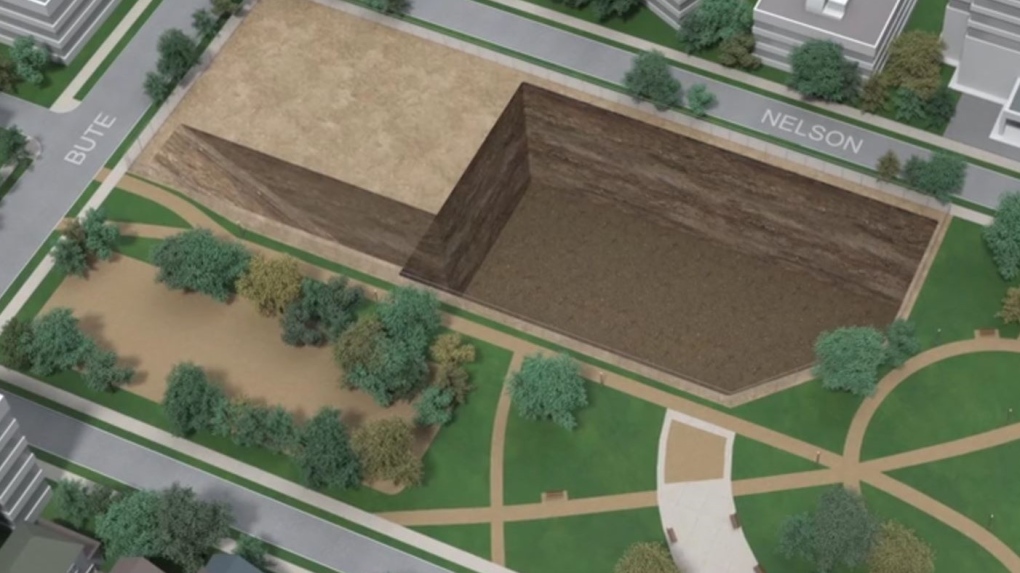 Rendering if where the new substation construction will be under Nelson Park. (BC Hydro)

The Vancouver Park Board will receive millions of dollars from BC Hydro for allowing construction under a downtown green space.

The park board says it approved a request from the utility to have property rights in part of Nelson Park for its West End substation project. For that approval, BC Hydro is giving the park board $8 million, which it says will be used to improve parks in the neighbourhood.

"Knowing the substation project at the Lord Roberts Annex property adjacent to Nelson Park was moving ahead meant shifting from our more familiar role as those who build and maintain parks and public amenities, to ensuring the least amount of disruption possible to the park," said Donnie Rosa, general manager of the Vancouver Board of Parks and Recreation, in a news release.

"Another aspect of our role in this was to ensure reasonable compensation from BC Hydro on behalf of the park users who will be impacted by this project."

The board calls Nelson Park "critical access to nature" for residents in the West End, adding that 20,000 people live within a 10-minute walk of the park.

Work on the substation is expected to begin as early as 2024 and is estimated to be finished in 2029. Power line construction under the park will happen over the course of one or two winter months, when fewer people are using the green space.

"We're committed to delivering safe and reliable power to our customers in downtown Vancouver," said Chris O'Riley, president and CEO of BC Hydro, in a news release.

"The rights of way access in Nelson Park is an important component for a new underground substation in the West End that will serve the downtown core for generations to come."

The new substation will replace the Dal Grauer substation, which was built more than 70 years ago.

They are the most fiercely polarizing issues in American life: abortion and guns. And two momentous decisions by the Supreme Court in two days have done anything but resolve them, firing up debate about whether the court's Conservative justices are being faithful and consistent to history and the Constitution – or citing them to justify political preferences.

An Ottawa criminologist says questions about whether political pressure was placed on the RCMP commissioner in the Nova Scotia shooting investigation illustrate why Brenda Lucki should not report to the public safety minister.