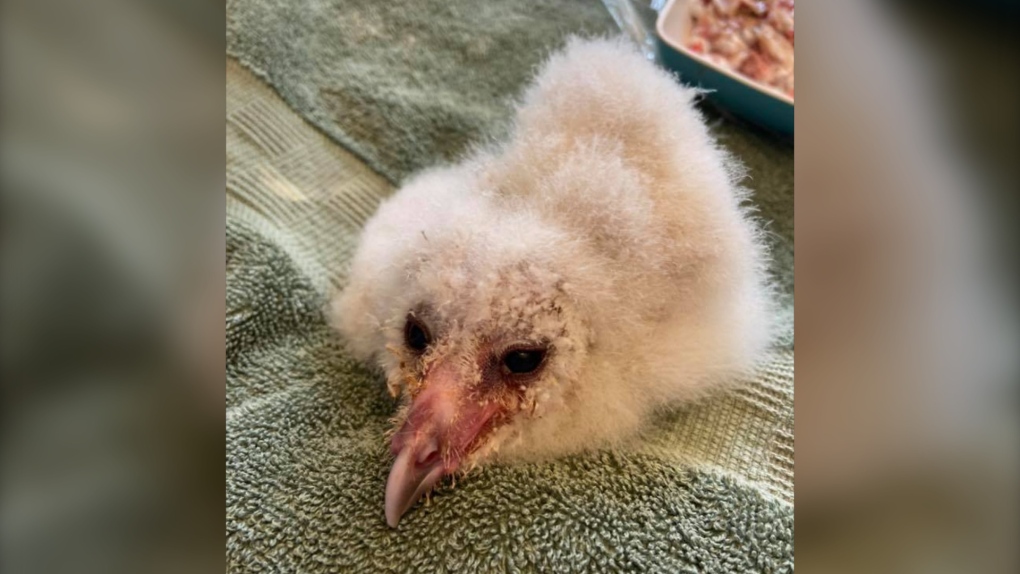 A baby barn owl recently brought to the Orphaned Wildlife Rehabilitation Society in Delta is seen in this handout image.

VANCOUVER -- A baby barn owl is now in the care of an animal rehabilitation centre after they say a "well-intentioned" member of the public tried to care for the bird on her own.

The Orphaned Wildlife Rehabilitation Society said the woman tried to raise the bird by herself for three weeks after it had hatched in her care, but she eventually brought it into the Delta facility on April 24.

The owl had no appetite and was "severely splay legged," according to the agency, which takes in birds from all over the province and specializes in caring for raptors including eagles, falcons, hawks, ospreys, owls and vultures.

"He was in rough shape," said Rob Hope, the raptor care manager at OWL. "When we got him, we said because he's young and he's growing, we’re giving an attempt to save him."

Hope said the woman had been feeding the bird baby mice, which do not have the same nutrient content as adult mice. Improper food can cause brittle bones that can break from the wrong housing or handling, according to OWL.

"When they're young, their parents feed them full-sized mice in pieces," said Hope. "Unfortunately, apparently this owl only had baby mice which were bought from a pet store, and they don’t contain calcium or other nutrients because of course they're not fully developed like an adult mouse would be."

On the bright side, even though the owl had five breaks in different places, including his beak, he is already starting to heal and his appetite is returning, the group said.

The owl's broken bones are being monitored closely, but because of his age, they can only be splinted and supported for a few hours at a time. Surgery is also not possible right now, OWL said.

"With the right food and the right care, we are hoping that we can raise him to the point where his body will be self-sufficient," said Hope. However, the group noted that the bird is not out of the woods yet.

"Our rehabilitators are hopeful that with the age of the bird, he is healing the breaks so fast that he may just get lucky and with proper care we can guide his healing process properly," OWL said in a Facebook post on Friday.

If the owl gets stronger, he will join a foster mother owl and siblings so he can "learn the ropes" of being a barn owl, the agency said.

The group emphasizes that people should not try to raise injured or orphaned wildlife on their own but instead contact a local wildlife rehab centre. They also note that it's illegal under the Wildlife Act to possess a native species without proper permits.

"Your average Joe that does not have a permit is breaking the Wildlife Act and can be charged," Hope said.

The agency is preparing for the possibility that the baby owl might not survive, but emphasizes that the bird is doing well at the moment.

"We never give up," said Hope. "There may be a point where his body just can't do it anymore, or something takes a turn for the worse. And then, of course, if the animal isn't going to make it or he's suffering, then of course we would stop, we wouldn't keep going. But as it looks right now, the little guy's got fight left in him."

Additionally, the rehab facility is also caring for a barred owl that was found bleeding and unresponsive underneath a tree on West Pender Street in Vancouver on April 23. OWL believes that the bird likely ingested rat poison, which they say is usually "a death sentence." Hope said rats that eat the poison can sometimes take up to 10 days to die, and owls will go for those rats as they are easier prey since they are often slower-moving or incoherent.

"Unfortunately, it affects more than just the rats," Hope said.

The barred owl has been receiving vitamin K treatment for the last week and is now eating on her own, which Hope said is a good sign.