A live nest-cam is giving bird watchers a close look at a species of owl so endangered that it is estimated only 20 live in the wild in Canada.

The camera was set up at the Northern Spotted Owl Breeding Centre in Langley, and lets viewers get a glimpse at how the species raises its young.

A nine-year-old owl that staff named "Shania" laid two eggs in March, but only one of two was fertile. The egg hatched on April 19 (see video below) after several weeks in an incubator, the Fish and Wildlife Compensation Program said.

The chick, currently being referred to as "Chick D" spent its first two weeks in intensive care. At only four days old, staff noticed it was showing signs of splayed legs -- its legs were sticking out from under its body, which can be a problem for developing chicks' delicate bodies.

Those working at the centre used adhesive bandages to make custom hobbles to keep its feet tucked underneath its body. Their trick worked, preventing further damage and correcting the problem.

It was able to return to its parents' nest on May 5, and has recently been seen walking around the nest.

The feathered family has its nest in a hallowed tree stump, an area chosen by Shania and her mate, "Scud."

As the chick gets stronger it will be more visible and active, FWCP says. For now, those watching the feed can see patient Shania caring for the owlet, while Spud brings the pair food he's gathered off-camera, though they may catch glimpses of the baby.

Shania was born in captivity at the centre in May 2008, while her made Scud was born in the wild in 2010. The pair were introduced three years ago, and Scud was "not deterred by her strong personality, like other males," the FWCP said.

Chick D is Shania's second chick born at the centre: "Elliott" hatched last year and was named after the Elliott State Forest in Oregon.

The chicks are part of a breeding program that started 10 years ago in hopes of restoring the wild population of northern spotted owls to more than 200 adults. Staff hope to release as many as 20 juveniles each year over the next 10 to 15 years, starting in 2018. 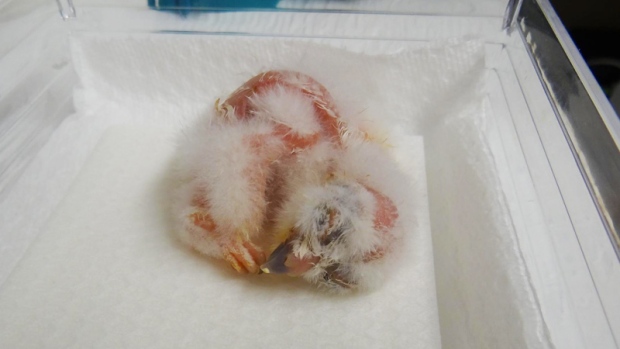 In Canada, the species is found only in southwestern B.C., in an area spanning from Whistler and Lillooet down to the Fraser Valley. The FWCP said the species is considered the rarest owl in Canada. Reaching a length of up to 48 centimetres, they're among the largest owls in North America.

They can also be found in old growth forests in Northern California and the U.S. Pacific Northwest. Defenders of Wildlife, an American conservation organization, estimates there are fewer than 2,260 breeding pairs south of the border.

The northern spotted owl cam is not the first bird-based livestream in B.C. The Vancouver Park Board runs an annual webcam streaming a flock of nesting great blue herons that return to Stanley Park each year, and the Hancock Wildlife Foundation has two bald eagle cams operating in Delta.