VANCOUVER -- After a pet dog in Hong Kong tested "weak positive" for the novel coronavirus, known as COVID-19, many pet owners may have questions about how the outbreak could impact their four-legged family members.

CTV Morning Live sat down with Dewdney Animal Hospital's Dr. Adrian Walton to learn more about that diagnosis and what pet owners can do to keep everyone in their family healthy.

Below is part of a four-minute interview, which has been edited for length and clarity.

Jason Pires: This confirmed case in Hong Kong, does that mean humans could actually pass the virus along to pets, and pets the other way around to humans?

Dr. Adrian Walton: A couple of weeks ago we thought this wasn't an issue, but there was that one case. Initially we thought it was transitory; the dog licked the owner's face and they were getting the virus that way. But since then we've had two more positive tests suggesting that the virus is actually replicating and living within the pet.

The good news is there is no evidence that the dogs are showing disease, which means they're very unlikely to spread it to somebody because they're not coughing or sneezing. So it is possible for your pet to have the disease, but not transmit it to you. At least that's the current thought.

Keri Adams: Should we be treating our pets any differently?

Walton: What I'm suggesting to people right now is if you're developing flu-like symptoms, try to avoid contact with your pet. Don't cough in their face, wash your hands before you handle them, before you feed them. All the same routines that you would be doing with your family members, you want to do with your pets.

And this is going to be hard for people because when you're sick there's nothing better than cuddling up to your pet. But if it's flu-like symptoms, it's probably a good idea to avoid it for now.

Adams: Are there pet masks that people can use?

Walton: First off, the masks are useless. And even if you had a mask for your dog, it would only stop transmission from the dog to you, not the other way around. So no, there isn't, and wouldn't be effective anyway. 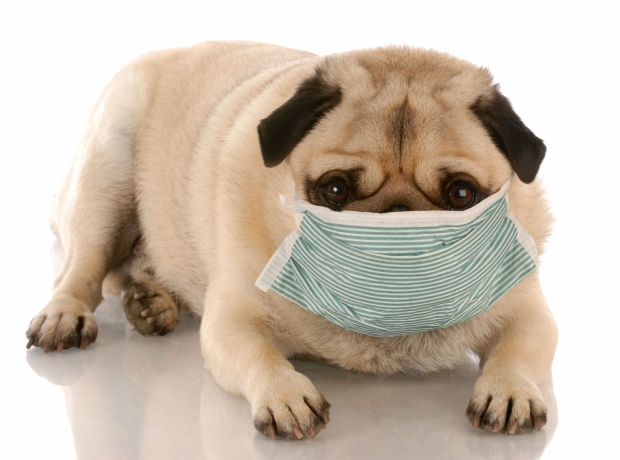 Pires: Should we let people go near our pets? If we go out, should we avoid large groups?

Walton: That would be the same situation as 'should you be avoiding large groups?' The truth is, we live in a society. You're going to have to interact with people. So the most important thing is making sure you're washing your hands as regularly as possible, making sure that you're being as safe as possible, and try to avoid panicking.

Adams: The Canadian government has actually listed some recommendations for reducing the risk of infection if a pet has had contact with someone with COVID-19, starting with avoiding close contact with your pet.

Walton: Yeah, and that's what we were talking about earlier. If you're showing flu-like symptoms, it's really important to avoid passing it to your pet, and understand that given what we currently think, if you are quarantined, it's very likely that they're going to be quarantining your pet as well at least for 14 days.

So one of the things they're recommending is making sure that you have enough food and medications to self-quarantine you and your pet for that period of time, but also understand that if you get hospitalized, you're going to have to have arrangements with somebody to take care of your pets.

So these are things that you should be planning ahead for and I know in my clinic we've had a lot of people getting a month's worth of medication, just in case.