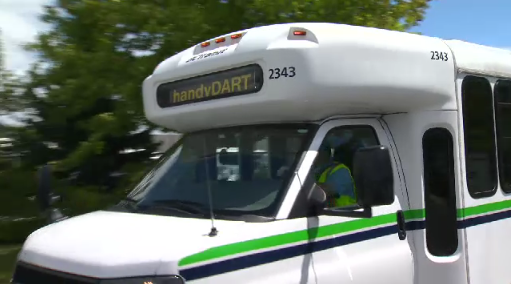 A B.C. tribunal is allowing a complaint alleging a HandyDART driver sexually harassed a passenger to proceed.

The decision to allow the complaint to go ahead, published by the B.C. Human Rights Tribunal last week, said a unnamed woman who uses a wheelchair claimed a HandyDART driver made inappropriate sexual comments and "invited her to sexual contact" in October 2019.

HandyDART is a service offered by some transit operators, like B.C. Transit and TransLink, that provides door-to-door transportation for people requiring mobility assistance. In this instance, B.C. Transit has a contract with another local transit company to operate HandyDART in the unspecified community.

The decision explained once the complainant gets on the bus, she is locked in and can't move until someone unlocks her chair and unbuckles her seatbelt for her.

"She submits that she was trapped into a secured wheelchair and was unable to move without assistance while on the bus," tribunal member Grace Chen wrote in her decision.

"She says she was vulnerable to the harassment due to her disability, and was trapped on the bus with the driver because of her disability."

According to the tribunal's decision, the complainant filed a grievance to B.C. Transit after the incident and was interviewed by a general manager. The tribunal heard that police investigated the incident, and decided no charges would be laid.

After being interviewed, the complainant said she didn't hear from the transit operator for several months, until she was told through a staff member at her residence that she had to ride with an attendant – at her own expense – if using HandyDART.

A general manager for the company operating the buses claimed the woman "made similar accusations against other people," which is why she was asked to use the service with an attendant.

Meanwhile, the woman alleged, the company wanted her "to sign an agreement stating that her complaint was false." Instead, she filed another complaint to B.C. Transit but didn't get a response.

"The complainant has not used HandyDART since February 2020, and uses public buses and taxis instead," Chen wrote.

"She says it is not because of the pandemic, but because she is afraid to run into the driver, and she feels humiliated and angry about what happened. She says she struggles to use the public bus service because of her wheelchair."

B.C. Transit requested the human rights complaint be dismissed, saying while it had a contract with the company operating HandyDART, it doesn't run the service itself. But the complainant said B.C. Transit "plays a role in delivering the service," and that her file was handled both by the HandyDART operator and the Crown corporation.

Chen wrote in her decision that B.C. Transit didn't persuade her the complainant won't be able to show a connection between the transit companies. While she said it doesn't mean the woman's human rights complaint will be successful, it's permitted to go to a hearing.

The allegations made by the complainant about the driver's actions have not been proven in court.