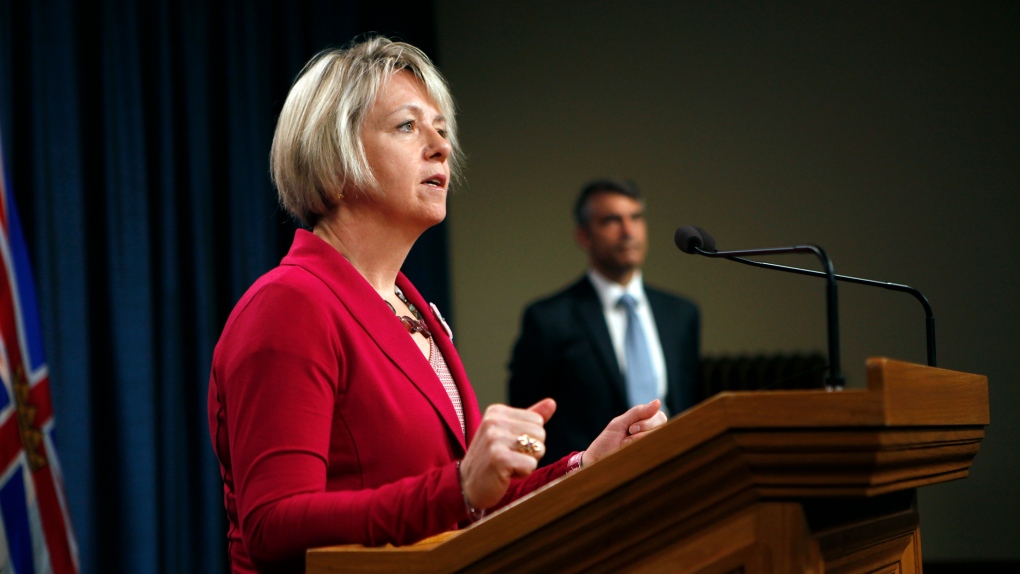 Provincial Health Officer Dr. Bonnie Henry is joined by Chief Electoral Officer Anton Boegman as they update how the provincial election will be held during he novel coronavirus as they hold a press conference at B.C. legislature in Victoria, B.C., on Tuesday September 22, 2020. THE CANADIAN PRESS/Chad Hipolito

VANCOUVER -- For the first time in the COVID-19 pandemic, British Columbia's active case total has surpassed 9,000.

Dr. Bonnie Henry announced another 694 confirmed cases of the novel coronavirus in her daily update Thursday, adding the total active caseload is now at a record-breaking 9,103.

The provincial health officer said 12 more people have died of COVID in the 24 hours since her last update on the disease.

"We know that our long-term care homes in particular are most vulnerable, and we know right now, it's the biggest challenge that we are facing," Henry said.

Out of the 35,422 total confirmed cases since the start of the pandemic, Henry said, 24,928 of those patients are considered to be recovered.

Another 10,849 remain under active monitoring, though they are not considered to be active cases.

Henry said 325 people are in hospital with the disease as of Thursday, 80 of which are in intensive care.

The doctor said officials know that health-care workers at long-term care homes and in hospitals are strained and tired, "and we need to do our bit everywhere to make sure that we support and protect them too.

"And that is the purpose of the orders that we've had in place in B.C. … What we have seen is that when people come together, this virus can spread, now more than ever, particularly as we go through winter in the province."

Updates to the strict and sweeping orders put in place last month are expected Monday. It is not yet known whether those measures, which were issued only for a two-week period, will be extended or withdrawn.

Henry said she recognizes the majority of people in the province are making sacrifices to protect both their loved ones and strangers, and that those who feel they're the only one taking the rules seriously aren't alone.

"You are all part of our team, and that is what is making the difference for us," she said.

"We need to stay all in, 100 per cent committed to getting us through these next few weeks to months, so that we will have the ability to protect people and to save lives, and through your efforts, we will get through this."

Perhaps unsurprising news to those who've been following the province's daily updates, the majority of cases added Thursday were in the Fraser Health region, which spans from Burnaby to Fraser Canyon.

The second-most impacted area was Vancouver Coastal Health with 114.

There were 82 new cases in the Interior, 23 in the Northern Health authority, and 10 on Vancouver Island.

Henry did not say which, but four of the cases added were epidemiologically linked, meaning the patients didn't test positive, but were confirmed to have had the coronavirus because of their exposure to an active case and their symptoms.

The Baillie House, a long-term care home in Maple Ridge, is dealing with at least one case of COVID-19.

Gateway Lodge, a housing development in Prince George, also has an outbreak, as does the University Hospital of Northern British Columbia.

With the latest update, there are now 56 active outbreaks in long-term care and assisted living in B.C., and eight in acute care.