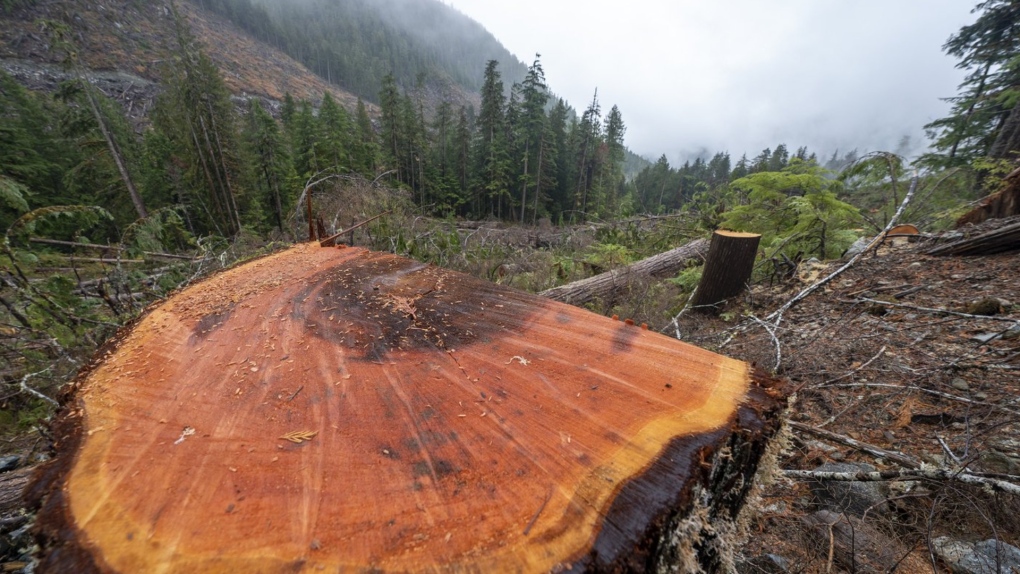 A fresh cut stump is pictured in a cut block in the Fairy Creek logging area near Port Renfrew, B.C., on Tuesday, Oct. 5, 2021. THE CANADIAN PRESS/Jonathan Hayward

The worsening effects of climate change are compounding the historical loss of British Columbia's old-growth forests, says the co-author of a new paper that shows decades of logging on the province's central coast targeted the highest-value forests first.

“History tells us that we have really depleted these high-value elements of the landscape, and that we can't keep going,” said Ken Lertzman, professor emeritus at Simon Fraser University's school of resource and environmental management.

“At the same time, (forests) have never been under greater threat from natural disturbances that are driven by a changing climate.”

Some forests have been set aside for logging because of their ecological and cultural value, only to be scorched by increasingly severe wildfires, he added.

That's the reality today's policy-making must reflect when it comes to determining how B.C.'s forests will be valued and used in years to come, Lertzman said.

The paper published Monday in the peer-reviewed journal Proceedings of the National Academy of Sciences examined more than 150 years of logging across 8,550 square kilometres of forests around Bella Bella on B.C.'s central coast.

The paper demonstrates how the logging industry engaged in “high-grading,” or targeting the most profitable and accessible forests first, especially valley-bottom old-growth that played a crucial role in watershed ecosystems, Lertzman said.

Such forests are not only economically valuable, but they also provide a host of social benefits and “ecosystem services,” from habitat for key species like salmon and bears, to water regulation, to recreation, to Indigenous cultural uses, he said.

“We have higher expectations from the forest. We don't just want two-by-fours.”

The pattern of clear-cutting highly productive, valley-bottom forests before moving up the mountain slopes is repeated along B.C.'s coast, Lertzman noted.

“Any kinds of decision-making today really have to be understood and have to act in the context of the reality of this depleted landscape,” he said.

“Our research doesn't say, 'You've got to do X,' or give a specific strategy, but it defines a context for thinking about what will be the fate of the remaining old growth.”

It appointed a panel of independent ecologists and forestry experts who identified2.6 million hectares of unprotected old-growth forests at risk of permanent biodiversity loss, then asked more than 200 First Nations to decide whether they supported the deferral of logging in those areas for an initial two-year period.

As of last spring, the province had deferred logging across a total of 1.87 million hectares of old-growth, including 1.05 million identified by the expert panel.

The province counts 11.1 million hectares of old-growth across B.C., though several members of the same expert panel had previously released an analysis showing less than three per cent of what remains is highly productive, with large trees.

The paper also demonstrates how policy changes can lead to “a greater stewardship ethic” in harvesting behaviour by linking shifting logging patterns with changes introduced with B.C.'s Forest Practices Code in 1995.

The code dealt with elements of forest management that had previously received little regulatory attention, the paper says, such as new rules for the size and distribution of cut blocks and increased protection for fish-bearing streams.

“What you can see in our paper, is that since the beginning of the Forest Practices Code, and the Great Bear (Rainforest) agreements, there is, for instance, an increase in the distance from cut blocks to large streams,” Lertzman said.

The “ecosystem-based management” regime implemented in the Great Bear Rainforest through agreements and regulations between 2000 and 2016 saw 85 per cent of the forest protected, including 70 per cent of its old growth over time.

The agreement is also an example of conservation financing, or funding initiatives that spur local economic development while aligning with stewardship goals.

The federal and B.C. governments contributed a combined $60 million in 2007 to establish a fund that continues to support Indigenous-led conservation and economic development initiatives in the Great Bear Rainforest.

Lertzman said the link between such policy changes and shifting logging patterns shows that policymakers have the tools to change how the industry operates.

He also said decades of industrial logging have caused “shifting baseline syndrome,” meaning people's perception of the landscape is based on what they see and the depleted state of forests in the province has become “normalized.”

“And the little remnant bits ... that we go to and sort of look at and stand in awe, it's what the wildlife ecologists call the guts and feathers. The bits that were left over.”

This report by The Canadian Press was first published Oct. 3, 2022.

Montreal Canadiens star goalie Carey Price reversed course and said he did in fact know about the 1989 Polytechnique shooting spree that killed 14 women in Montreal despite previous comments that he didn't. He also apologized to those that may have been upset by his comments against the proposed federal gun legislation.

Amid a shortage of firefighters across Canada, the Canadian Association of Fire Chiefs (CAFC) is calling on the federal government to address the grave impact these shortages will have on vulnerable communities.

While the federal government was successful in procuring COVID-19 vaccines amid an urgent pandemic situation, the Public Health Agency of Canada (PHAC) fell short when it came to minimizing the number of doses wasted and now millions are about to expire, according to Canada's auditor general.