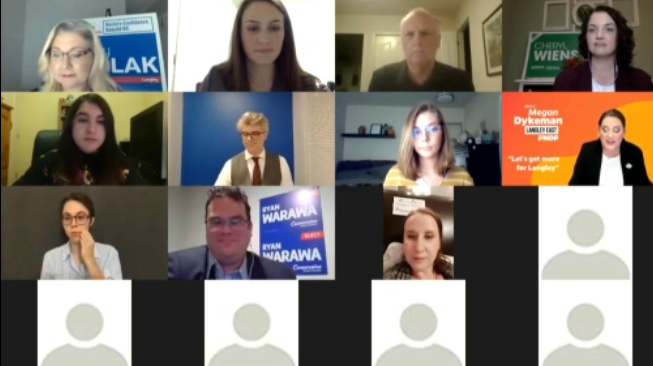 A Langley, B.C. candidate debate during the Oct., 2020 provincial lection was hijacked on Zoom by someone who posted offensive content.

VANCOUVER -- Voters go to the polls Saturday to determine who will lead British Columbia through the COVID-19 pandemic and recovery, marking the end of a campaign unlike any in the province's recent history.

The election has seen the NDP vie for a majority, the Greens make the case for minority governments and the Liberals unveil one of the most expensive campaign promises to date.

NDP Leader John Horgan called the snap election one year before the fixed voting date in a bid to turn the New Democrats' minority, propped up for 3 1/2 years with Green support, into a majority.

It's a gamble Liberal Leader Andrew Wilkinson and Green Leader Sonia Furstenau hope will backfire. They've consistently called the move unnecessary and opportunistic at a time when people need stability most.

“This pandemic will be with us for a year or more and that's why I believe we need to have an election now,” Horgan said when the legislature was dissolved on Sept. 21.

“We can either delay that decision and create uncertainty and instability over the next 12 months - more speculation, more talk about what might be - or we can do what I believe is always the right thing and ask British Columbians what they think.”

At dissolution, the NDP and Liberals were tied with 41 seats. The Greens held two seats, there were two Independents and one seat was vacant.

The pandemic has altered the election for voters and candidates alike.

It has drawn campaign pledges like affordable daycare and improvements to long-term care to the fore of all party platforms. Kissing babies and mass rallies, meanwhile, went out the window in place of more sterile and controlled virtual town halls.

“The hardest part of the campaign for me has been the lack of the ability to connect with groups of people because of COVID. We've successfully run a few of these car rallies where people stay in their vehicles and honk their horns in approval. But it's kind of a disconnected campaign for everybody,” Wilkinson said in an interview this week.

The NDP was the first to announce its platform, which rested largely on its record and promised to continue what it started, including expanding $10-a-day child care and implementing a rent freeze until the end of next year. The centrepiece was a promise to provide a $1,000 recovery benefit for families with annual household incomes under $125,000.

The Liberals countered with promises to cancel the PST for one year at a cost of $7 billion, eliminate the two per cent small business income tax and open the Insurance Corp. of B.C. to competition.

Furstenau, meanwhile, reminded voters of Green fingerprints on the minority government's accomplishments, particularly the Clean BC strategy to transition the province to renewable energy.

She pitched the Greens as a party committed to collaboration but unwilling to simply obey another party, making the case for why their record-breaking three-seat win in 2017 shouldn't be an anomaly.

“We recognized in this kind of health emergency that we had to put service ahead of everything else,” she said.

One thing unchanged by the pandemic was the presence of controversies. This time they shared a theme of equity and diversity.

Wilkinson found his news conferences dominated by questions about candidates who made sexist remarks or voted against a rainbow crosswalk. Laurie Throness stepped down as the Liberal candidate in Chilliwack-Kent after comparing free birth control to eugenics.

Former MP Nathan Cullen, a star candidate for the party, was also at the centre of criticism.

The first arose when the party rejected the nomination package from an Indigenous woman hoping to run for the New Democrats, which has an equity mandate that she said should have favoured her. Then an open microphone captured Cullen mocking the Kinkles nickname of an Indigenous candidate in a neighbouring riding.

Arguments for increased diversity grew louder after both Horgan and Wilkinson were taken to task for answers at the TV debate on how they have reckoned with their own white privilege.

The pandemic-era campaign has created one final uncertainty as the campaigns wrap up. With more than 720,000 mail-in ballots requested and about 478,000 returned so far, it's unclear whether a result will be declared Saturday night.

Elections BC said Friday it is aiming to have a final count done by Nov. 16.