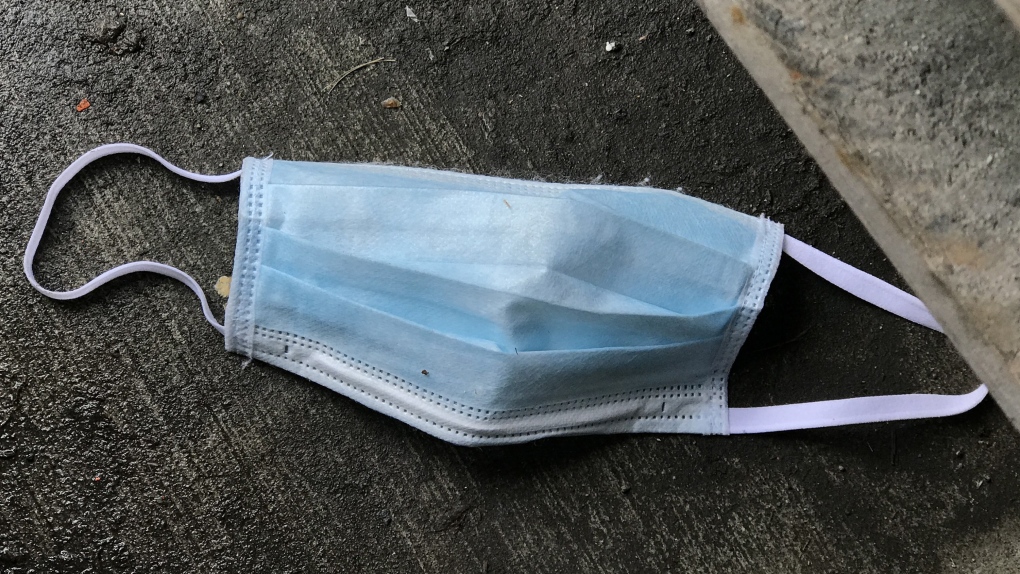 A used protective face mask is seen discarded on the ground in Vancouver. in May 2020. (Jonathan Hayward / THE CANADIAN PRESS)

VANCOUVER -- Modelling data released this week provided a closer look at which parts of the province have the highest rate of COVID-19.

A heat map featured in a presentation from health officials Thursday showed regions of the province colour-coded by their cumulative rate of cases per 100,000 population.

While daily updates from health officials have included the number of cases in each of B.C.'s five regional health authorities, the update this week was a bit more specific.

Of all parts of the province, the City of Vancouver had the highest raw number of test-positive cases, at 540, but the region with the highest rate of positive tests was "Fraser East." There, 367 confirmed cases of COVID-19 equate to an infection rate of more than 100 cases per 100,000 people.

Vancouver and "North Shore/Coast Garibaldi" were the only other regions with more than 75 confirmed cases per 100,000, according to the data from the B.C. Centre for Disease Control, while the Fraser North and Fraser South regions - which include Delta, Burnaby, and other Metro Vancouver municipalities - had somewhere between 50 and 75 cases per 100,000.

Within the Lower Mainland, the City of Richmond was the only region with fewer than 50 infections per 100,000 people.

Of the regions listed in the BCCDC breakdown, Richmond had significantly fewer cases, overall, than the rest of Metro Vancouver, with just 88 positive tests.

However, data has not been provided for individual cities other than Vancouver and Richmond.

Elsewhere in B.C., the case load varied. On Vancouver Island, the rate per capita was higher in the north than central and south. The northern portion includes some of B.C.'s Central Coast area.

In B.C.'s north, the highest number of cases were recorded in the northern Interior. Thompson Cariboo Shuswap also had a higher number of cases than many surrounding areas.

Here's the breakdown of cases recorded in each region. The rate per 100,000 can be seen in the colour-coding in the map embedded below.

The BCCDC data also looked at infection rates in the final two weeks of May, a period of time that marked B.C.'s "restart."

Fraser East again led the way, with more than 15 cases per 100,000 population during that 14-day period.

There were 46 confirmed cases in Fraser East during that time frame. Fraser South recorded 57 positive tests during those two weeks, but that total equated to a lower rate per 100,000 people.

Vancouver recorded 13 new cases during the final two weeks of May, while Fraser North had 10, the North Shore had just one, and Richmond had zero.

Similarly, Northwest, Northeast, East Kootenay and all three regions of Vancouver Island had zero confirmed cases of the novel coronavirus between May 18 and 31.

The Okanagan had one, Kootenay Boundary and Thompson Cariboo Shuswap had two, and the Northern Interior had four.

The graphic embedded below is from the presentation given by Henry and Health Minister Adrian Dix on Thursday.

Read more about the latest modelling data, and scroll through the full presentation, in Thursday's coverage.

A previous version of this story incorrectly described total case numbers for each region as the number of cases per 100,000 population. The rate per 100,000 is shown only in the colour-coded map, which does not include specific rates for each region, only ranges. The number in parentheses on the map represents total positive tests in each region for the time period specified.