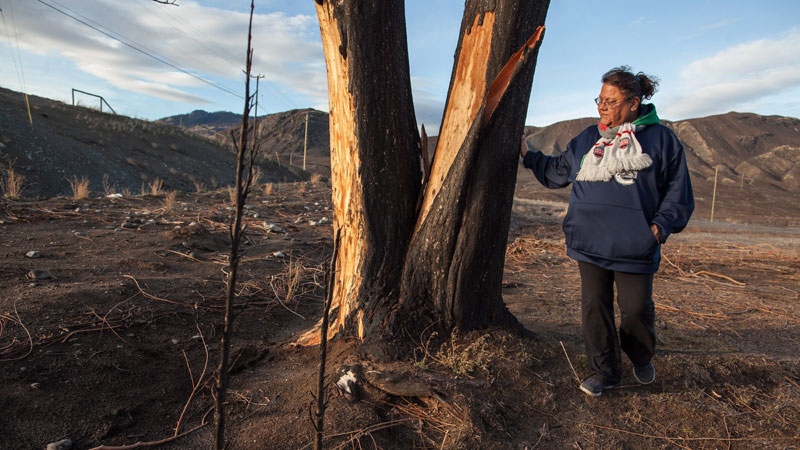 Angie Thorne stands where her house once stood on the Ashcroft Indian Reserve, B.C., on Monday November 27, 2017. (THE CANADIAN PRESS / Jeff Bassett)

ASHCROFT, B.C. — Little remains of the wreckage from Angie Thorne's home after a wildfire tore through her reserve in central British Columbia earlier this year.

The blackened concrete, twisted metal chairs and seared welcome sign have all been removed, replaced with gravel backfill.

"It's heartbreaking but it feels good to be back here," Thorne says, looking around the place she lived for 21 years.

"Our lives are still very much affected," she adds, her voice catching. "It doesn't just stop because the cameras are off and nobody is talking about the fire."

Months have passed since emergency crews doused the flames of B.C.'s precedent-setting wildfire season, but some residents of the Ashcroft Indian Band remain uprooted.

Standing beside Thorne, former chief Mae Kirkpatrick explains the struggle of living in the nearby village of Ashcroft with no timeline of return.

"It's very depressing, because you can't just walk outside and wave at the neighbour across the street," says Kirkpatrick, 63. "Ashcroft is a different community. I have neighbours but I don't see them. I don't talk to them. I'm lost. I'm lonely and depressed down there."

Thorne and Kirkpatrick turn and wave at two trucks that honk their horns as they pass. They smile as they wipe away tears. "That's what I miss," Kirkpatrick says.

Residents, fire experts and community leaders across B.C.'s Interior say fallout from the most destructive wildfire season in the province's recorded history will be felt for years to come.

What set an otherwise normal fire season apart was a two-day period in July that sparked over 100 fires and prompted the provincial government to declare a state of emergency for the first time since 2003, said Kevin Skrepnek, spokesman for the BC Wildfire Service.

"July 7 certainly was a day I'll never forget," Skrepnek said. "Not to say other fires didn't start later on, but those were the monsters we were dealing with for most of the season."

More than 65,000 residents were forced from their homes over the summer as flames destroyed a record-setting 12,000 square kilometres. Despite the magnitude of the disaster, no one was killed, Skrepnek said.

"When you look at the sheer number of people who were on the front lines, all the other responders involved, the number of people who had to evacuate, in some cases in the middle of the night, the fact that there were no fatalities, no life-threatening injuries either, is just incredible," he said.

The province has commissioned an independent report into how B.C. responded to the disaster, the first such review since former Manitoba premier Gary Filmon was tasked with looking into the 2003 fire season.

Filmon's report is responsible for the shape of the wildfire service today, Skrepnek said, suggesting this year's review could have far-reaching implications for disaster response and preparedness in the province.

Lori Daniels, an ecology professor at the University of British Columbia, said communities are not prepared to deal with the new realities of fire in a world increasingly upended by climate change and that's an important lesson from this summer.

"We have to learn to live with fire," Daniels said, adding that 2017 "cannot be another wake-up call. Our forests, our communities are not resilient. The status quo is not working, and that refers to both forest management and its impacts on wildfires."

Tinkering with the system is not enough, said Daniels, who is advocating for an overhaul to how B.C. approaches fire prevention that would involve letting more blazes burn, leaving some areas as grasslands and regularly removing flammable underbrush that accumulates near inhabited areas.

"Unless we do that, our communities won't be safe, our citizens won't be safe and it won't be possible to have a sustainable forest industry."

Cache Creek, just north of Ashcroft, was also hard hit by this year's fires, which immediately followed an episode of heavy flooding that took the life of the community's fire chief.

Mayor John Ranta said he worries about floods next year, given how little vegetation remains to hold back water. He said he is also concerned about the effect the evacuations have had on the economy.

"Most businesses are highway-oriented businesses. They generate probably 75 per cent or more of their annual revenue in the two months of the summer when everybody is on vacation," said Ranta, who also chairs the surrounding Thompson-Nicola Regional District.

An adviser has been hired to canvass business owners about the help they need to get back on their feet.

The district lost more than 200 structures, including permanent homes and summer cabins, Ranta said. A former planner has also been enlisted to work with homeowners eager to rebuild, although some cottages and houses may no longer be permitted in the same locations under new bylaws.

It will take years to recover, Ranta said. "Some people's lives have been decimated."

Robert Gray, a fire ecologist based in Chilliwack, B.C., said one of the most troubling aspects of 2017 is how much more severe it was than experts anticipated.

"We thought we were going to see these kinds of fire conditions maybe 10 years down the road, thinking we had time to get ahead of the curve," he said. "The fact that it's happened now means that we are going to see conditions worse than this in the future — in the near future, if you can believe that."

Gray is not alone in calling for a more hands-on approach to fire prevention.

One of the largest evacuations this year took place in and around the community of Williams Lake, about 200 kilometres north of Cache Creek, where about 25,000 people left their homes.

Mayor Walt Cobb said residents remain shaken and some have left for good, but he commended emergency workers for having prepared and executed a solid evacuation plan.