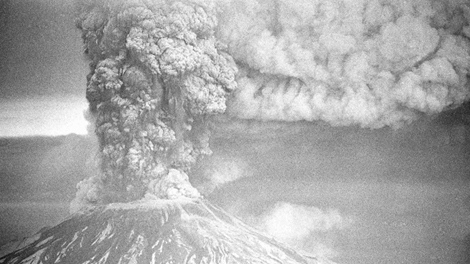 In this May 19, 1980 file photo, Mount St. Helens erupts in Washington state, sending a plume of ash many miles skyward.(AP Photo/Jack Smith, File)

VANCOUVER -- Current and former B.C. residents are sharing their memories of the Mount St. Helens volcanic eruption, 40 years after the event on May 18, 1980.

Mount St. Helens is located 96 miles south of Seattle, Wash., but people living in Vancouver and Victoria could hear the massive explosion when the mountain finally blew after two months of earthquakes and smaller eruptions.

Remember it well. In kitchen in Duncan. Huge thump, thought it might be dynamite, but too heavy, too distant for that.
My godson born an hour later. #MtStHelens

Canadian astronaut Chris Hadfield recalled hearing the eruption from Victoria, where he was graduating from university.

I was at graduation in Victoria BC, and heard it from there. https://t.co/5yrJUPxXOA

Matthew Barlow, a local history author, recalled that "the ash made it dark for days."

I remember this eruption, I was a kid. We lived in Victoria, BC, and the ash made it dark for days. #MtStHelens https://t.co/TWgsOBouod

Retired soccer coach Alan Errington remembered he was playing in a tournament in Portland, Ore., and when the team drove back to B.C., they had to stop to remove trees from the road.

Playing in a soccer tourney in Portland,with BC select team.
Played Oregon on Sat & won, supposed to play California on Sun, but woke up to learn of the eruption, game cancelled.
Drove back in vans to BC, took 15 hours.
Had to stop on I5 to remove trees on road.
Scary.

The eruption claimed the lives of 57 people in the area around the mountain. In an article published on May 14, 2020, the U.S. Geological Service says the Mount St. Helens explosion paved the way for advances in forecasting, monitoring and co-operation between agencies.

"The 1980 eruption was the first large explosive eruption studied by scientists and observers using modern volcanology," the USGS says.

"The volcano was also easily viewed and accessible. As a result, the eruption and its effects were heavily photographed from numerous vantage points. The debris avalanche opened the cone, and scientists were able to inspect its interior in a new and novel way. The eruption jump-started interest in the study of explosive eruptions and monitoring efforts to improve warning systems that help mitigate hazards."

The USGS also described the awe-inspiring and devastating explosion. The mountain "cataclysmically erupted," and "a high-speed blast levelled millions of trees and ripped soil from bedrock." Volcanic mudflows travelled down the side of the mountain, carrying logs and large boulders, "which destroyed forests, bridges, roads and buildings."

A "towering plume of ash" remained airborne for over nine hours, and the wind carried the ash hundreds of miles away, according to the USGS.