B.C. resident says she 'would not go' to China amidst coronavirus concerns 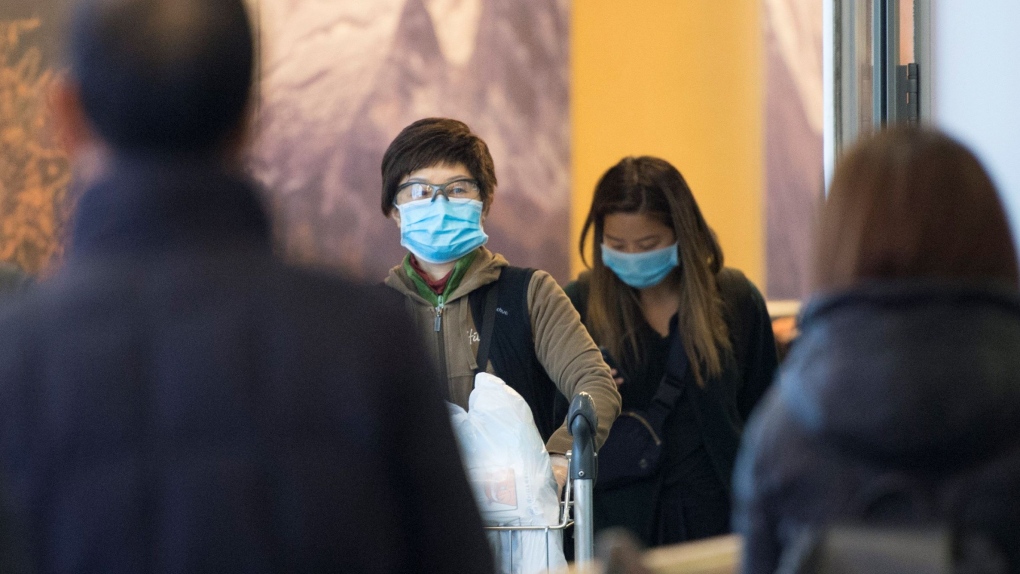 Passengers wear masks as they arrive at the international arrivals area at the Vancouver International Airport in Richmond, B.C., Thursday, January 23, 2020. THE CANADIAN PRESS/Jonathan Hayward

VANCOUVER -- A woman who has regularly visited China from her home in Delta, B.C., says she would not travel there over concerns about a new coronavirus that is spreading beyond the city that officials have closed to try to contain the mysterious illness.

Alice Li said she goes to China every other year but would scrap any travel plans after at least 26 deaths and more than 800 infections were linked to the virus that has spread to five other countries.

"I would not go, I would cancel," she said. "You never know how it's passed on."

Li, who moved from China about 40 years ago, said the Chinese-Canadian community in British Columbia is concerned about developments in the virus that originated in a market in Wuhan, where the population of 11 million has been quarantined.

A similar lockdown has occurred in at least nine other Chinese cities, affecting about 33 million people.

Queenie Choo, who lives in Richmond, said she wouldn't travel to China for upcoming lunar new year festivities but is undecided on whether to cancel a business trip scheduled for next month.

Choo, CEO of SUCCESS, a community service group for newcomers to Canada, said she had planned to visit Beijing and Guangzhou in February but getting between those cities requires travel by plane and crowded trains, which could increase the risk of infection.

The virus that's causing respiratory infections with symptoms similar to influenza has also been detected in Japan, South Korea, Singapore, Thailand and the United States, where one case was reported in a suburban Seattle man who became ill after returning from Wuhan.

The World Health Organization decided Thursday not to declare the outbreak a global health emergency for now.

Health Minister Patty Hajdu has said the risk of contracting the coronavirus is low in Canada, where no cases have been reported though five or six people were under observation.

For now, Choo said the Chinese-Canadian community is hoping officials in Canada, where another coronavirus killed 44 people in 2003, take adequate precautions to prevent any outbreak of the virus.

"We are very cautiously guarded, and we want to make sure there's no infection spread in B.C., where we live, and in Canada, so we rely on the health-care system to do their vigilance and monitoring at the airport, and surveillance," Choo said.

Fears about getting the virus, believed to have been transmitted from wild animals sold at a Wuhan market before it spread from person to person, have grown to the point that a local a business has sold out of masks it typically sells for construction.

John Elzinga, manager of KMS Tools in Langley, said four locations in the Vancouver area sold several hundred boxes containing 20 masks each since Wednesday and a rush shipment of 960 boxes has been ordered.

"A lady told me you can't buy these in China. She's sending them home. They're sending them to family and friends overseas, many of them are," Elzinga said, adding the N95 mask protects against dust and people believe it will keep them from getting ill.

"We sell them commercially in large quantities but not like this. This is something completely different," he said.

"We're being blown away."

Dr. Stephen Hoption Cann, an epidemiologist at the school of population and public health at the University of British Columbia, said masks can provide some protection from droplets when someone sneezes or coughs and the requirement for residents to wear a mask in public in several Chinese cities means many of them are needed.

"The important thing is just keeping your hands away from your face, out of your eyes, ears, nose and mouth. If the mask on your face is preventing you from doing that that's a good thing," he said.

A lot of coronaviruses circulate every year and cause mild colds, but little is known about the new strain of coronavirus so taking measures such as washing hands and being aware of touching doors, for example, is important because viruses can live on surfaces for 24 hours, he said.