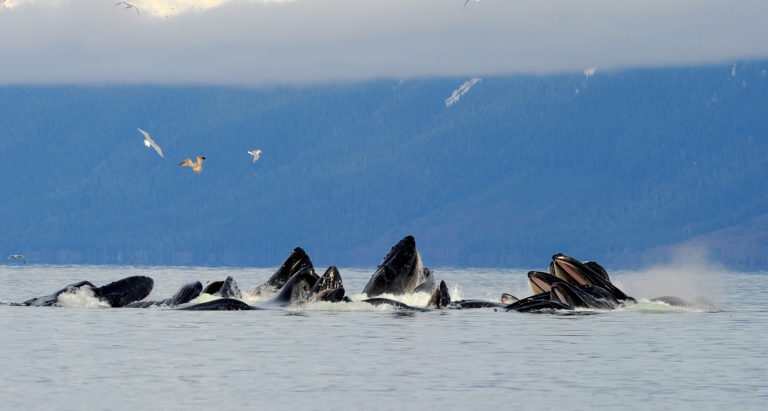 New research from the University of British Columbia is shedding light on the ways that whales feed underwater without flooding their airways with seawater.

The research, published this month in Current Biology, shows that lunge-feeding whales – the type that lunge and gulp at large schools of krill – have a special mechanism in the back of their mouths that stops water from entering their lungs when eating.

“It’s kind of like when a human’s uvula moves backwards to block our nasal passages, and our windpipe closes up while swallowing food,” says lead author Dr. Kelsey Gil, a postdoctoral researcher in the department of zoology, in a statement.

Specifically, a fleshy bulb acts as a plug, to close off upper airways, while a larynx closes to block lower airways.

The humpback whale and the blue whale are both lunge-feeders, but the scientists’ research focused on fin whales, thanks in part to being able to travel to Iceland in 2018 and examine carcass remains at a commercial whaling station.

“We haven’t seen this protective mechanism in any other animals, or in the literature. A lot of our knowledge about whales and dolphins comes from toothed whales, which have completely separated respiratory tracts, so similar assumptions have been made about lunge-feeding whales,” Gil said.

Lunge-feeders are impressive, Gil said, because sometimes the amount of food and water they consume is larger than their bodies. After snapping at krill, and while blocking the water from their airways, the whales then drain the ocean water through their baleen, leaving behind the tasty fish.

The study’s senior author Dr. Robert Shadwick, a professor in the UBC department of zoology, says the efficiency of the whales’ feeding is a key factor in their evolution.

“Bulk filter-feeding on krill swarms is highly efficient and the only way to provide the massive amount of energy needed to support such a large body size. This would not be possible without the special anatomical features we have described,” he said in a statement.

Police in Texas waited 48 minutes in school before pursuing shooter

Amid protests, NRA meets in Texas after school massacre

With protesters shouting outside, the National Rifle Association began its annual convention in Houston on Friday, three days after a gunman killed 19 students and two teachers at an elementary school on the other side of the state, renewing the national debate over gun violence.

NEW | 'Died of a broken heart': Can it really happen?

Johnny Depp's lawyers ask jury to give actor 'his life back'

Johnny Depp's lawyers asked a jury Friday 'to give Mr. Depp his life back' by finding that his ex-wife, Amber Heard, committed libel.

Iran's paramilitary Revolutionary Guard seized two Greek oil tankers Friday in helicopter-launched raids in the Persian Gulf, officials said. The action appeared to be retaliation for Athens' assistance in the U.S. seizure of crude oil from an Iranian-flagged tanker this week in the Mediterranean Sea over violating Washington's crushing sanctions on the Islamic Republic.