VANCOUVER -- As 2020 draws to a close, the early praise for B.C.'s pandemic response has largely disappeared.

Residents were not spared the kinds of restrictions that forced many Canadian families to celebrate the holidays apart, and COVID-19 has continued to infiltrate the province's seniors' homes and infect vulnerable residents at an alarming rate.

In a physically distanced year-end interview, CTV News asked Premier John Horgan how much responsibility he takes for how the crisis has unfolded on his watch.

"Well, government bears responsibility for a range of issues when it comes to how we've addressed COVID-19," Horgan said. "But we don't take credit for the successes and we shouldn't take complete blame for the failures."

The premier acknowledged the provincial government is responsible for infection control and prevention in long-term care facilities, the vast majority of which get public funding.

There have been dozens of new outbreaks in seniors' homes in recent months, with sometimes tragic and devastating results. Some 367 of B.C.'s 808 coronavirus fatalities were recorded between Dec. 1 and Dec. 24, the date of the last update from health officials.

Meanwhile, some families have been calling on the government to loosen the care home visitor restrictions that have left elderly residents isolated, their condition visibly deteriorating over the course of the pandemic.

Some families haven't even been able to visit loved ones through glass windows because the rules vary by facility.

"The challenges of protecting as many people as possible fall to us," Horgan said. "And the rules and recommendations that are in place are guided not by politics, not by trying to skirt the rules, but by trying to protect the greatest number of people."

The premier is no stranger to the heartbreaking consequences of separating seniors from their families. His father-in-law died this year without his wife of 65 years by his side. 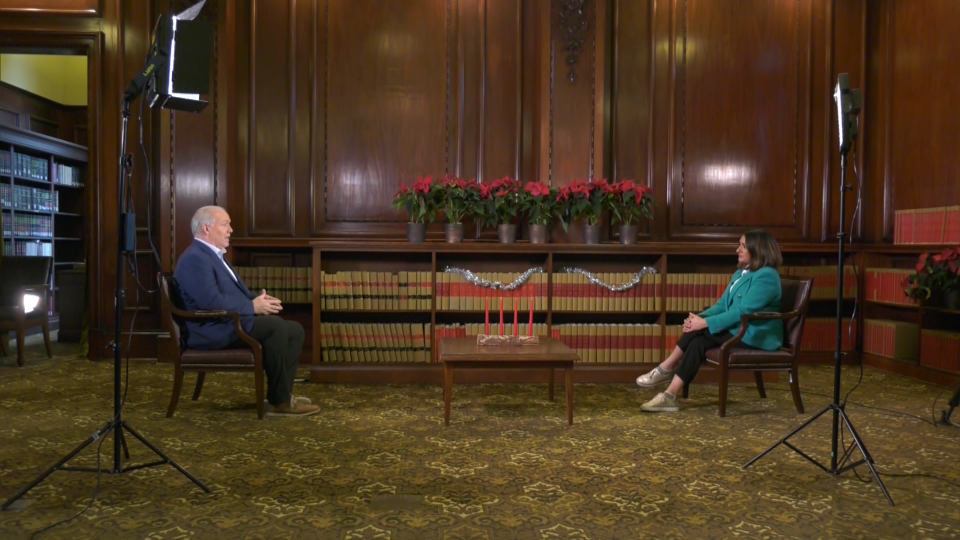 The arrival of Pfizer's COVID-19 vaccine has given some families a glimmer of hope that visitor restrictions could be lifted soon. While there is no firm timeline for when that might happen, Horgan suggested it could be in the coming months.

"Vaccines have arrived. That's going to transform 2021, thank goodness," he said. "By the second quarter of next year, we're hopeful that we'll be in a position where we can reduce those restrictions."

Moderna's vaccine is expected to reach the province early this week as well. B.C.'s first vaccine doses have been getting distributed to health-care workers, in the hopes of protecting vulnerable populations.

"Unbeknownst to a health-care worker, they could be bringing the virus into a (work) setting," Horgan said, adding that the government is doing what it can to keep everyone in those facilities safe. "We do our best to ensure the PPE – the protective equipment – is there for staff."

Early on in the pandemic, long-term care homes sounded the alarm about PPE supplies, and the government scrambled to secure equipment during a period of intense global demand. Now, there are calls for rapid testing in seniors' homes, a strategy Alberta has already implemented.

Rapid testing is being advocated by both care providers and the opposition BC Liberals.

Horgan indicated the province is waiting for the accuracy to improve before going down that road, as false positives could potentially keep a needed worker at home.

In the meantime, the government is looking to 2021 with a mixture of optimism and caution.

"2020 meant the end of life for hundreds of British Columbians because of COVID-19, and we are far from out of the woods," Horgan said.

Pfizer or Moderna for your booster shot? B.C. immunologists weigh in