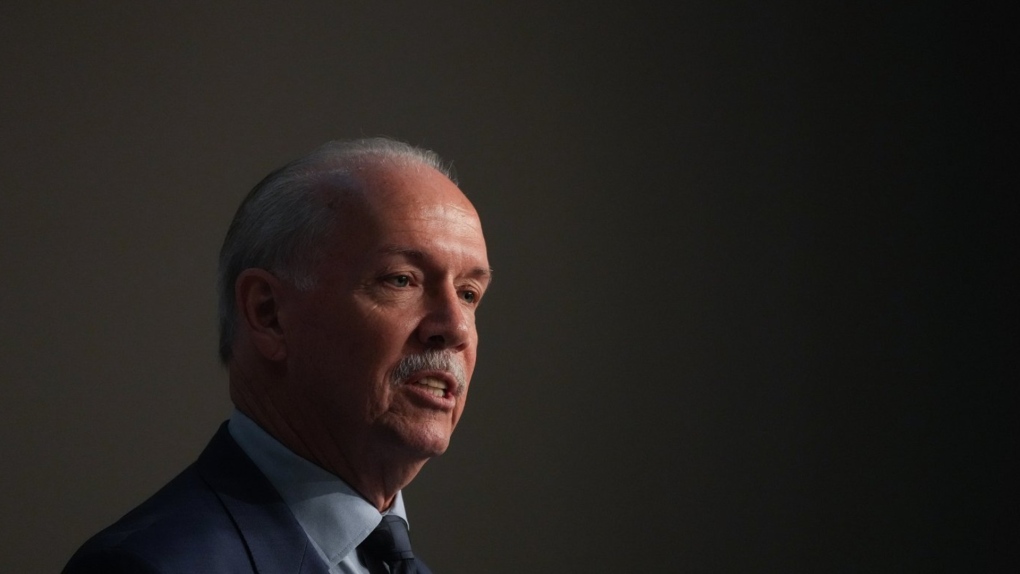 B.C. Premier John Horgan addresses the Union of B.C. Municipalities Convention, in Whistler, B.C., on Friday, Sept. 16, 2022. The premier is travelling to San Francisco for a series of climate-focused meetings with leaders from U.S. West Coast states. THE CANADIAN PRESS/Darryl Dyck

British Columbia Premier John Horgan is travelling to San Francisco for meetings with leaders of U.S. West Coast states, where he expects to sign up to joint action on climate change.

Horgan says the gathering of the Pacific Coast Collaborative grouping that starts Thursday includes himself and the governors of California, Oregon and Washington.

The premier says the leaders expect to sign a memorandum agreement on climate approaches for the region.

Horgan says B.C. and the U.S. West Coast states are facing similar climate-related issues, including wildfires, weather events and wild salmon declines, and the jurisdictions are looking for ways to work together.

The Pacific Coast Collaborative, formed almost 15 years ago, has previously discussed high-speed rail connections, including a line between B.C. and Washington.

Horgan says the more recent focus of the collaborative has been on climate change and its consequences to the region.

“When we look to the fire seasons and droughts, devastating droughts in California, the impacts of those issues are all the way up the coast,” he said.

“The impact on salmon. Salmon are not just an iconic B.C. species, they're iconic to Californians as well as Oregonians and Washingtonians.

This report by The Canadian Press was first published Oct. 5, 2022.

A fiery train derailment closed a highway in southeast Saskatchewan on Thursday morning.

Prince William's office said 'racism has no place in our society' as he sought to prevent the backlash over his godmother's treatment of a Black advocate for survivors of domestic abuse from overshadowing his trip to the United States.

As it happened: Morocco win 2-1, Canada finishes World Cup without a point

The Canadian men’s national team finishes its World Cup campaign without a point after a 2-1 defeat to Morocco. Canada had its chances but came up short. Re-live all that happened with CTVNews.ca's updates as the match unfolded.

As of today Canadians can apply for new dental benefit: here's how

The RCMP said investigators are searching a home in Vaudreuil-Dorion, a suburb west of Montreal, as part of a 'national security' operation. The national police force began its operation Wednesday night. Police at the scene would not say what led them to the house on Aquin Avenue, in Quebec's Monteregie region.

Footage of an upcoming documentary about Harry and Meghan released Thursday shows the couple is once again prepared to tackle their rift with the Royal Family head on and in their own words.