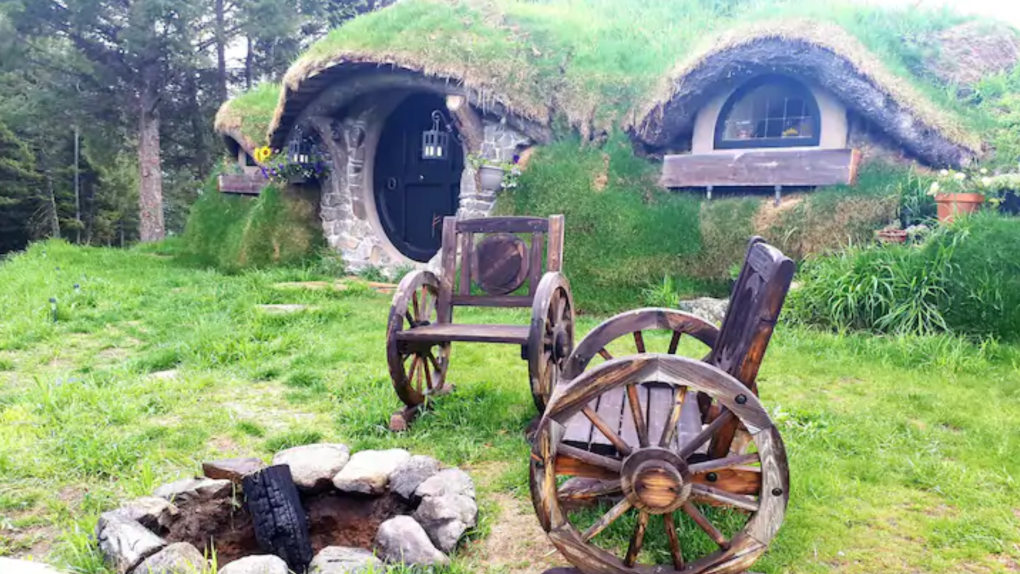 The owners of the Hobbit Mountain Hole are renaming their Airbnb after being contacted by a representative from Warner Bros. Entertainment.

VANCOUVER -- The B.C. owners of a Hobbit-themed Airbnb have embarked on a quest to rename their rental property to avoid a losing battle with the dragon of intellectual property rights.

The Hobbit Mountain Hole run by Christine Le Comte and her husband was modelled after the hillside homes envisioned in the works of J. R. R. Tolkien – but there's been trouble in the Shire.

The couple was recently contacted by a representative from Warner Bros. Entertainment, who demanded that they stop using the company's trademarked terms.

"I didn't know that Hobbit is a protected word," Le Comte told CTV News. "I didn't think anything of it. Maybe I was a little bit ignorant."

The Airbnb is nestled on a secluded part of the couple's mountain ranch, about 30 minutes outside of Osoyoos. It was already built when they purchased the property last year, and Le Comte admitted she wasn't very familiar with The Hobbit or the Lord of the Rings trilogy when they took over – but she quickly brought herself up to speed.

"You just get really immersed in it," Le Comte said of the popular books and film series. "You can't help it, you know."

She also found ways to enhance the immersion at their rental, picking up light fixtures and even commissioning clocks and other items that she felt had a Middle Earth flare.

"It was a lot more barren when I got it, so I just spent the year adding to it and improving it and adding things to make it more special," Le Comte said.

The results exceeded the couple's expectations. Despite opening up in the middle of a global pandemic, they said the Hobbit Mountain Hole has become a popular vacation spot for people looking to unplug.

The Airbnb has no TV or Wi-Fi, but plenty of room to cook a meal, read a book or play a board game. In other words, it was not built for Hobbits, who are between two and four feet tall in the books.

"It's all regular-sized," Le Comte said. "When you're inside, the ceilings are pretty high and you wouldn't think you're in a hole. It is a hole, but it's actually pretty spacious in there."

With the work they've put in, the couple isn't ready to give up their Hobbit association altogether. But they're not digging in their heels against Warner Bros. either.

Instead, they're polling their Instagram followers to find a suitable replacement name for their Airbnb listing, with options ranging from "Bags End on the Mountain" to "Second Breakfast Hideaway" – a reference to Hobbits' famous preference for seven meals per day.

"I guess they can just decide for themselves how many breakfasts they want to have," Le Comte added.