For now, you can just call her Chick D-22. She’s a rare northern spotted owl being raised by foster parents Bella and Jay in B.C.

“They’ve had babies in the past, but they are quite inexperienced. This is the first one they’re actually raising on their own,” explained Jasmine McCulligh, facility coordinator of the Northern Spotted Owl Breeding Program.

The chick hatched last month after being artificially incubated for 34 days at the Langley facility, the only one in the world breeding these owls.

“They’re one of the most endangered species in British Columbia,” said McCulligh.

“There’s fewer than five left in the wild, so the ones that we have here are super important to restore the population here in the province.”

Within Canada, the owls are only found in coastal B.C. South of the border, they live in Washington, Oregon and California.

In B.C, the owls’ existence became threatened due to habitat loss and competition from the barred owl.

The program to breed the endangered owls began 15 years ago, but McCulligh said it hasn’t been easy.

“No other organization has ever done it, so we’ve had to really start from scratch,” she explained. “We can’t look it up on Google.” 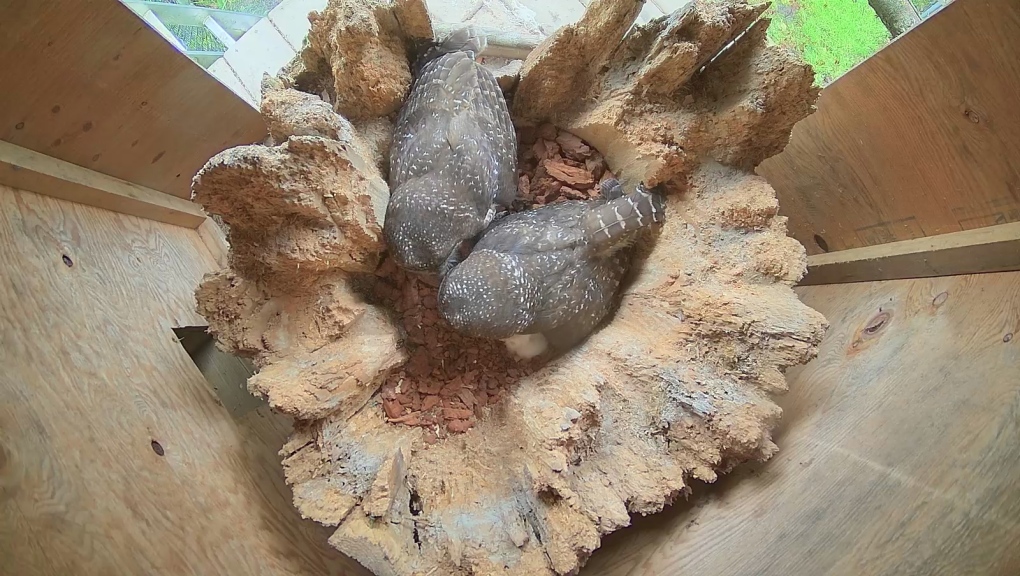 Jay and Bella, two endangered Northern Spotted Owls, are seen in their nest where they are fostering a new chick.

McCulligh said one of the biggest challenges they have faced is ending up with mostly male chicks.

“When you want to have one male and one female produce babies and you’re only having males, it's been hard to grow the population,” she said.

The goal is to release the owls back into areas of protected old growth forest.

They started out with six owls and now have 32 plus the chicks yet to be born this year.

The facility expects to finally release some owls this year for the first time ever.

“We’re not going to have 100 per cent success in the wild, unfortunately, but we’ve reached the point where we’re at capacity at the breeding centre,’ she said.

“She was about 100 grams and we think she’s probably close to 400 grams now,” McCulligh said.

The public’s invited to watch her through a livecam online and later play a part in giving this rare owl a name. The program says the peak times for seeing activity on the nest is when the owls are being fed, between 8:00-11:00 a.m. and 6:00-10:00 p.m.

Due to COVID-19, the facility has faced challenges including increased operational expenses and the cancellation of public outreach events.

“We estimate it costs about $1700 per year to feed just one Northern Spotted Owl in its first year of life; so we’re hopeful that this fundraiser will help out with those costs” says McCulligh.

More information can be found online.

NEW | Rate of extreme rainfall expected to increase dramatically by 2100

From closures to near-normal routines, students look back on COVID-warped school year

The final bell is about to ring at the end of a topsy-turvy school year warped by the COVID-19 crisis and students are reflecting on how the pandemic shaped things.

The latest on the G7 summit: Leaders at the Group of Seven summit in Germany have joked about what would make them look tougher than Russian President Vladimir Putin.

Many Canadians remain unaware of the involvement of forced child labour in the products they buy, according to non-profit agency World Vision Canada.

As Pride festivities kick off around the world, many refugees are celebrating the LGBTQ2S+ community for the first time.