B.C. money laundering inquiry could have lessons for other provinces: lawyer 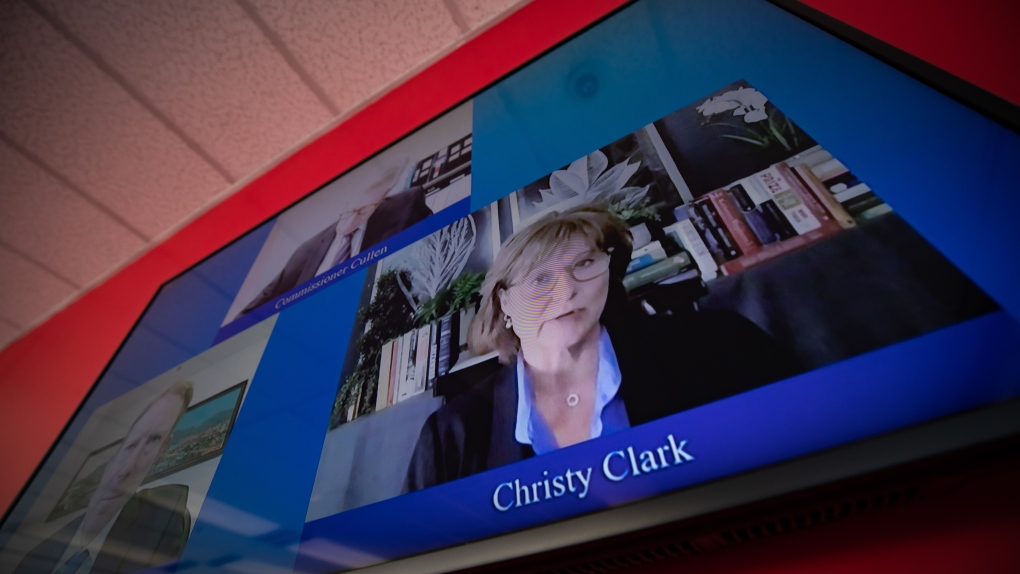 Seen on a livestream, former B.C. premier Christy Clark testifies remotely during the Cullen Commission into money laundering, in Vancouver, on Tuesday, April 20, 2021. Pictured with her on the live stream are Commissioner Austin Cullen and co-lead counsel Patrick McGowan. (Darryl Dyck / THE CANADIAN PRESS)

VANCOUVER -- Testimony at British Columbia's public inquiry into money laundering will wrap up Friday, leading to a final report the commission's chief lawyer says could provide broad lessons about the illegal activity for all Canadian jurisdictions.

The New Democrat government appointed B.C. Supreme Court Justice Austin Cullen in 2019 to lead the inquiry after four reports concluded the flow of hundreds of millions of dollars in illegal cash linked to organized crime and the drug trade impacted the province's real estate, luxury vehicle and gaming sectors.

The last witness expected to be heard on Friday is Rich Coleman, the former Liberal minister in charge of gaming, who was recalled after testifying before the commission in April.

Commission senior counsel Brock Martland said in an interview the aim is to make the final report helpful for the B.C. government and nationally.

“The hope is always that if the commission has gone well and the report is really well reasoned, founded on evidence and it's been well tested and well analyzed, that the report isn't simply helpful in this province but in fact has broader utility across the country,” he said.

The commission's website says its mandate includes making findings of fact on the extent, growth and methods of money laundering in B.C. and whether the acts or omissions of responsible regulatory agencies and individuals “contributed to money laundering in the province or amount to corruption.”

“Ours is a very broad mandate which doesn't limit itself in years or topics,” said Martland. “It's basically to head out and study the question of money laundering, examine where there are weaknesses in the system and what kinds of reforms and recommendations should be made.”

The commission heard testimony from two senior gaming investigators who said they raised concerns in 2009 with gaming and government officials, including cabinet ministers, about increasing amounts of suspicious cash likely linked to organized crime appearing at Vancouver-area casinos.

The ex-RCMP officers, Larry Vander Graaf and Fred Pinnock, who are no longer employed as gaming investigators, both testified their calls to take action to restrict the flow of suspicious cash were not acted upon aggressively enough.

Coleman, who was the gaming minister off and on from 2001 to 2013, testified issues related to being able to prove suspicious cash at casinos was illegal money made it difficult to address money laundering head-on.

He denied during testimony that his government put gaming profits ahead of the concerns about the suspicious cash at casinos.

The commission didn't say why it had recalled Coleman for its last witness on Friday.

B.C. Attorney General David Eby testified he was shocked to learn about the extent of the money laundering issue after meetings with officials at the Crown-owned B.C. Lottery Corp., and the government's gaming regulator, the Gaming Policy Enforcement Branch, after the NDP formed government in 2018.

Eby said he appointed an independent review of money laundering at B.C. casinos after watching videos taken outside of casinos showing gamblers picking up large bags packed with $20 bills and bringing them inside the venues.

Martland said the commission lawyers were aware of the highly charged debate surrounding the money laundering issue in B.C., but the overall aim of the inquiry is to provide the best information for the commissioner and the public.

“To the extent that we have got into areas that have a political component or a personal component, we really try to steer away from those kinds of debates and just really focus on what do we need to have evidence on and think our way through from the point of view of what's in the public's interest and what sort of recommendations can be made,” he said.

“We're not interested in taking sides in a political debate,” said Martland.

This report by The Canadian Press was first published May 13, 2021.