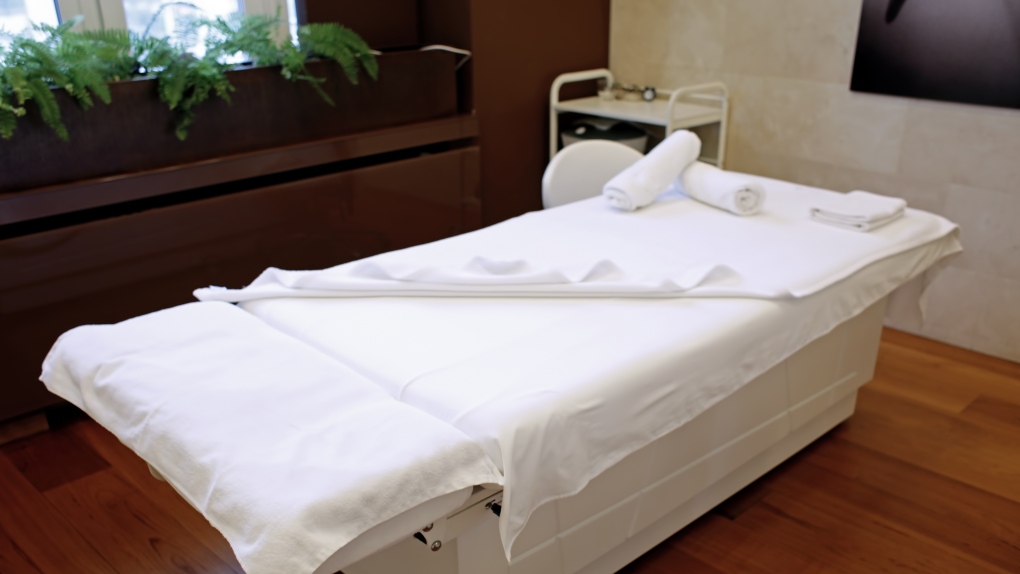 A massage table is seen in this undated photo. (Shutterstock)

A B.C. massage therapist's registration is being cancelled for at least five years after he admitted to professional misconduct against multiple patients, which included exposing their chests without consent.

According to a consent agreement posted by the College of Massage Therapists of B.C. earlier this month, Dennis Desrochers won't be permitted to reapply for registration in the profession until May 2027.

Desrochers admitted to several acts of misconduct against seven patients between 2011 and 2018.

In many of the instances, Desrochers undraped patients to their waist, exposing their breasts without consent and when it wasn't necessary. For some patients, that happened on "five or more occasions," the consent agreement said.

Desrochers also admitted to massaging some patients' chests "without ensuring that the patient was fully informed regarding treatment, which is a requirement for obtaining the patient’s full informed consent to treatment."

He also talked to some patients about their breast size and his experiences receiving a massage, which the college called "unprofessional communication."

On two other occasions in that seven-year timeframe, Desrochers used "his hands to examine a patient’s breasts for indications of cancer when doing so was outside the scope of practice of massage therapy in British Columbia."

Even if Desrochers applies to have his registration reinstated, the college said it won't be automatic, but will need to be reviewed by the registration committee.

"The inquiry committee is satisfied that the consent order in this matter appropriately reflects the seriousness of the admitted conduct and will protect patient safety through cancellation of Mr. Desrochers’ registration, meaning that Mr. Desrochers will no longer be authorized to practice as a registered massage therapist in B.C."

Ukraine's richest man filed a lawsuit against Russia at Europe’s top human rights court on Monday, seeking compensation over what he has said are billions of dollars in business losses since Russia's invasion.

The federal government has created a special task force to help tackle the major delays with immigration applications and passport processing that have left Canadians frustrated.

Abortion may be legal in Canada but accessing services very much depends on where you live, one advocate says.