A radio reporter from British Columbia who completed the Boston Marathon Monday before two bomb explosions rocked the finish line said there were thousands of spectators and runners in the immediate area.

Two people died and 22 were injured, although the severity of those injuries is still unknown. Organizers say the explosions were caused by homemade bombs -- and they are working alongside authorities to determine what happened.   Two more explosive devices were found nearby.

Paramedics and police rushed in to help people at the scene, while competitors, volunteers and spectators were diverted from the scene.

Vancouver resident Scott Rintoul, who finished the race in under three hours, had left the area and went back to his hotel with his wife before the blasts.

Speaking to CTV News by phone, Rintoul said the explosions went off on the north side of Boylston Street, right across from the grandstands where hordes of people sit to watch their loved ones cross the finish line.

“It is a stream for everyone who runs that marathon.”

Vancouver resident Mark Rosenberg told CTV News Channel he had just finished the race and was walking through the area where runners get food and water when the explosion went off.

Rosenberg saw smoke – and then heard the second blast.

Rintoul, who left in the first wave of runners this morning, didn’t hear the first explosions but said he heard another loud bang shortly after.

“We don’t know if that was an explosion. There’s pretty big sense of tension down here right now,” Rintoul said.

The explosions went off around 2:45 p.m. local time, around an hour after the first of the race’s runners had already crossed the finish line.

Prime Minister Stephen Harper tweeted that he was shocked to hear the news and that his thoughts are with those who are affected.

He said it's a sad day when an inspiring event is hijacked by "such senseless violence."

“Our thoughts and prayers are with those injured or affected by this horrible incident. We stand with our American neighbours in this difficult time.” 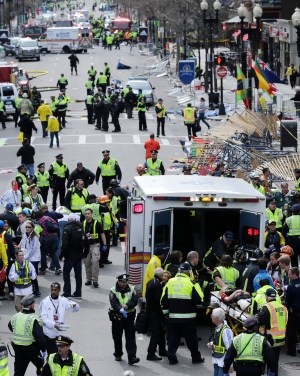