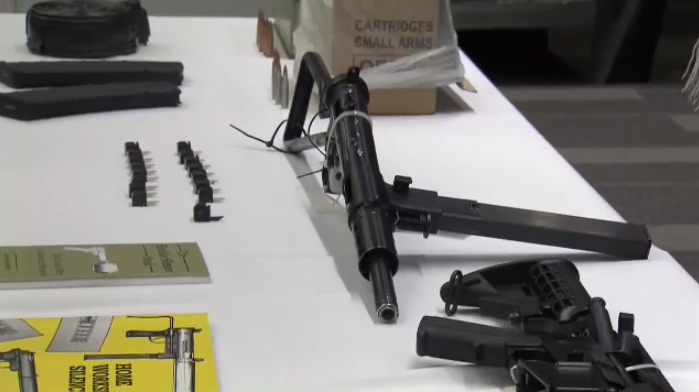 A number of items seized in a 2014 CFSEU-B.C. investigation into Bradley Michael Friesen are seen in this file image. (CTV)

VANCOUVER – A B.C. man dubbed the "Dr. Frankenstein of weapons makers" has had his parole revoked after police investigated more allegations against him involving firearms.

Bradley Michael Friesen was arrested on Nov. 14 after the Canada Border Services Agency intercepted and seized three packages containing "prohibited devices" that were being sent to him, according to a statement from the Combined Forces Special Enforcement Unit of B.C. Police also conducted a search warrant at Friesen's home in Hope.

Friesen was transported to a correctional facility and is being held in custody. No new charges have been laid "at this time," according to CFSEU-B.C. This is the second time in five years Friesen has been arrested by the province's anti-gang enforcement agency.

Friesen was arrested in 2014 after an investigation involving CFSEU-B.C. and the U.S. Bureau of Alcohol, Tobacco and Firearms. He faced 46 charges for running an online gun doctoring and parts business.

"The B.C. man was suspected of selling Glock auto sears and switches, gun parts which convert Glock pistols to fully automatic and silencers via the internet," said CFSEU-B.C.'s statement.

Police said at the time of his arrest in 2014, they found a number of weapons stashed within arm's reach of his then-five-year-old son. He served five years of a 10-year sentence and was released on parole that was set to expire in 2023.

"Bradley Friesen is a well-known offender who is alleged to have showed a complete disregard for the safety of the public, and a complete disregard for the conditions placed on him upon his release into the public," said Sgt. Brenda Winpenny, of the CFSEU-B.C. in the statement. "The ability of the CFSEU-B.C. to successfully work with our many provincial partners has taken potentially lethal items off the street and put a dangerous offender back behind bars."