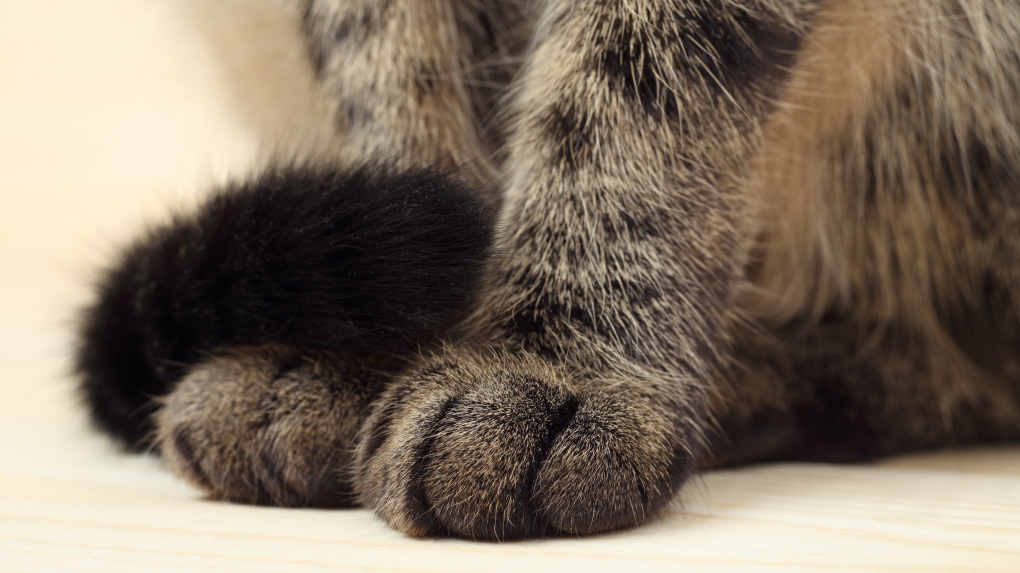 A cat's paws are seen in an undated image from Shutterstock.

A B.C. man who admitted to attacking his pet kitten so brutally the animal had to be euthanized has been sentenced to spend four months behind bars.

Vancouver provincial court heard Yiming Zhu was in a state of "emotional maladjustment" due to social isolation and mental health pressures when he decided to punish his kitten for biting and scratching him in the early morning hours of May 20, 2021.

The violent outburst that ensued saw the defenceless animal swung by its tail, repeatedly smacked against concrete and stepped on, according to court documents posted online this week.

The kitten's cries were loud enough to awaken Zhu's neighbour, who called police – but the attack persisted, with Zhu "apparently callous to (the animal's) suffering," Judge Harbans Dhillon wrote in her June 29 decision.

"The time over which the kitten was brutalized was about 20 to 25 minutes, with stops and starts," Dhillon wrote.

"His conduct caused pain, fear and distress to the animal and can fairly be called torturous."

When police arrived, the kitten was alive but barely moving. Authorities took the animal to an emergency veterinary clinic, where it was determined to be too grievously injured for treatment.

The court heard Zhu moved to Canada from China with his mother at age 15 to complete high school and attend university. His mother returned to China a few years later, leaving Zhu living alone in the family's Vancouver home, where he experienced loneliness, feeling of depression and deteriorating mental health.

His loneliness is what led Zhu to adopt a young, five-pound kitten, according to the documents, but he was woefully ill-equipped to care for the animal.

"He had no prior exposure to domestic pets, which had never been permitted in the family home," Dhillon wrote.

"The kitten was supposed to be a companion but managing it added more stress in his life. His mounting frustrations with the kitten urinating and defecating in the house, and biting and scratching him, reached the point that he lashed out."

While he was found to be experiencing an adjustment disorder at the time of the attack, an assessment report conducted at the Vancouver Regional Forensic Clinic determined he was not suffering from a major mental illness such as clinical depression or psychosis.

The court heard Zhu's emotional maladjustment has since resolved. While awaiting trial he managed to graduate from university and successfully apply to a Master's program in the U.K.

The Crown recommended a jail term of six months, but Dhillon noted a number of mitigating factors in the case, including that Zhu had no criminal record and was cooperative with police, providing a "full and frank" account of what transpired.

"He appears to have gained insight into his offending behaviour. During his forensic interview he expressed his deep regret," Dhillon wrote, also noting Zhu was found to be a low risk to reoffend.

He further took responsibility by pleading guilty to willfully causing unnecessary pain, suffering or injury to an animal.

The judge sentenced Zhu to four months in jail, and banned him from "owning, having custody or control of, or residing in the same premises as an animal" for 25 years.

Members of Parliament will be holding an emergency debate in the House of Commons on Monday night, giving MPs a chance to discuss 'the urgent and escalating situation in Atlantic Canada' following the deadly and destructive post-tropical storm Fiona. And, Prime Minister Justin Trudeau is making plans to visit the regions impacted 'as soon as possible this week.'

Along with a high inflation rate, Canadians are also contending with a loonie that's dropping in value. Personal finance columnist Christopher Liew explains the impact this will have on your personal finances, and tips to make your money go further.

Canada will be imposing new sanctions on Iran as a result of a continuing violent crackdown on protesters, Prime Minister Justin Trudeau said Monday.