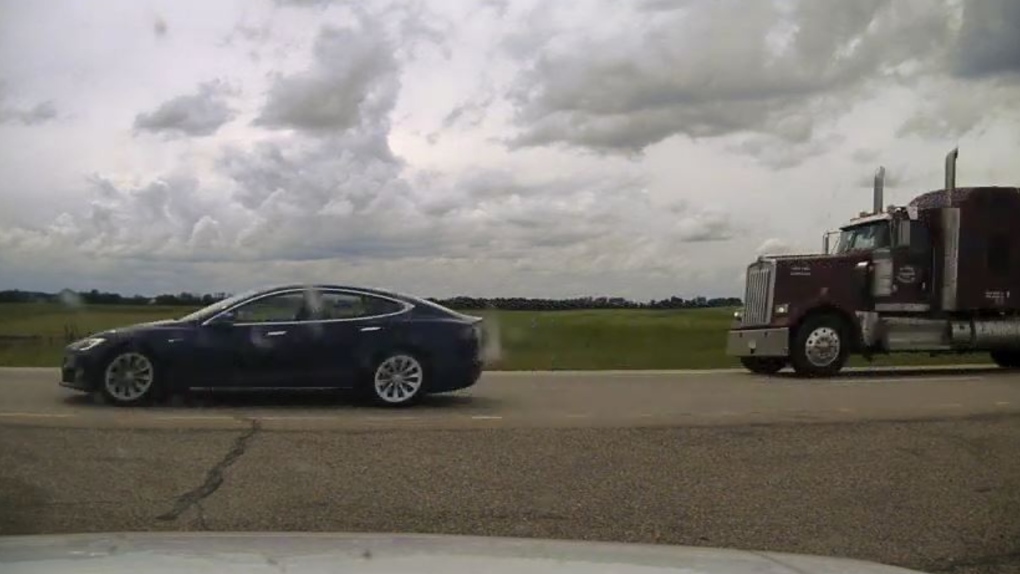 A Tesla Model S with the seats fully reclined is seen in this handout photo provided by Alberta RCMP.

VANCOUVER -- A young man from B.C. has been charged after Alberta Mounties allegedly caught him sleeping behind the wheel of a speeding Tesla.

The incident happened back in July, when authorities received a complaint of a car speeding down Highway 2 near Ponoka, a small community between Edmonton and Red Deer.

Alberta RCMP said the 2019 Tesla Model S was going more than 140 km/h and "appeared to be self-driving." Both front seats were fully reclined, and the two people inside the vehicle seemed to be asleep, according to law enforcement.

"Although manufacturers of new vehicles have built-in safeguards to prevent drivers from taking advantage of the new safety systems in vehicles, those systems are just that – supplemental safety systems," RCMP Supt. Gary Graham said in a news release. "They are not self-driving systems, they still come with the responsibility of driving."

Authorities said when the responding officer actived their emergency lights, the Tesla automatically sped up to 150 km/h. Police were eventually able to pull the vehicle over.

The driver, a 20-year-old man whose name hasn't been released, was charged with speeding and had his license suspended for 24 hours for fatigue. After further investigation, he was also charged with dangerous driving under the Criminal Code.

He's scheduled to appear in court in December.