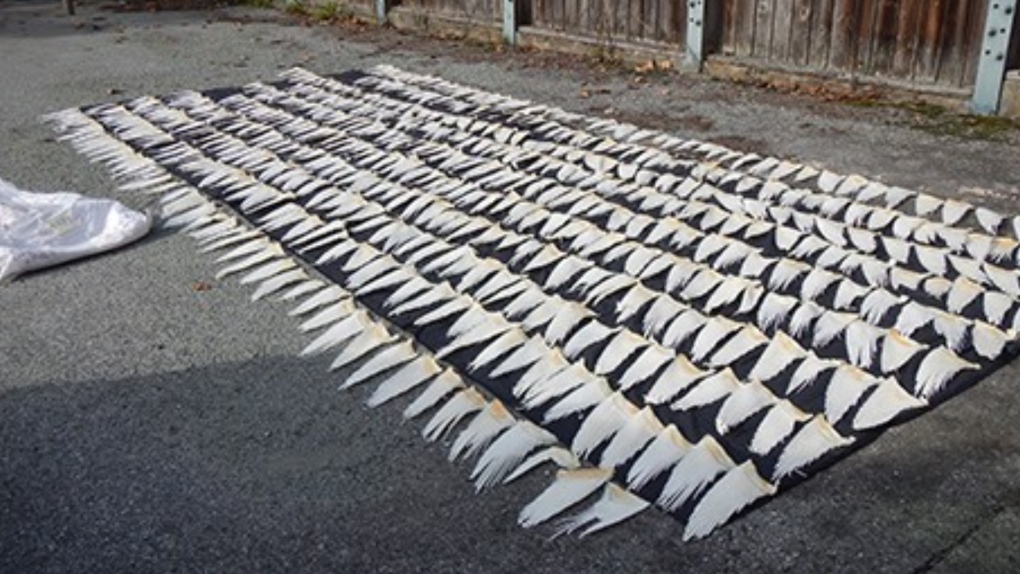 Shark fins are shown from one of 22 bags in the same shipment seized by wildlife enforcement officers. (Environment and Climate Change Canada)
VANCOUVER -

The federal government says an herbal medicine company has pleaded guilty in provincial court in Vancouver to a charge of unlawfully importing a protected shark species without a permit.

Environment and Climate Change Canada says in a news release that Hang Hing Herbal Medicine Ltd. was fined $75,000 for importing an endangered species without a permit.

The release says the company imported a shipment of 22 bags of processed shark fins in September 2017, which were declared as fish bone.

The Canada Border Services Agency noted that the shipment contained wildlife products and forwarded it to enforcement officials.

The department said DNA testing later determined that some of the fins belonged to the endangered oceanic whitetip shark and no import permit had been obtained.

The government says the fine will be directed to Canada's environmental damages fund, which supports projects that benefit the environment.

It says there are 400 shark species around the world and many populations are threatened, largely due to unsustainable fishing practices and the high demand of the international fin trade.

This report by The Canadian Press was first published Jan. 18, 2022.

A 911 dispatcher has been placed on leave and may lose her job after allegedly hanging up on an supermarket employee hiding during this weekend's shooting rampage in Buffalo, New York.

Rosmarie Trapp, whose Austrian family the von Trapps was made famous in the musical and beloved movie 'The Sound of Music,' has died.