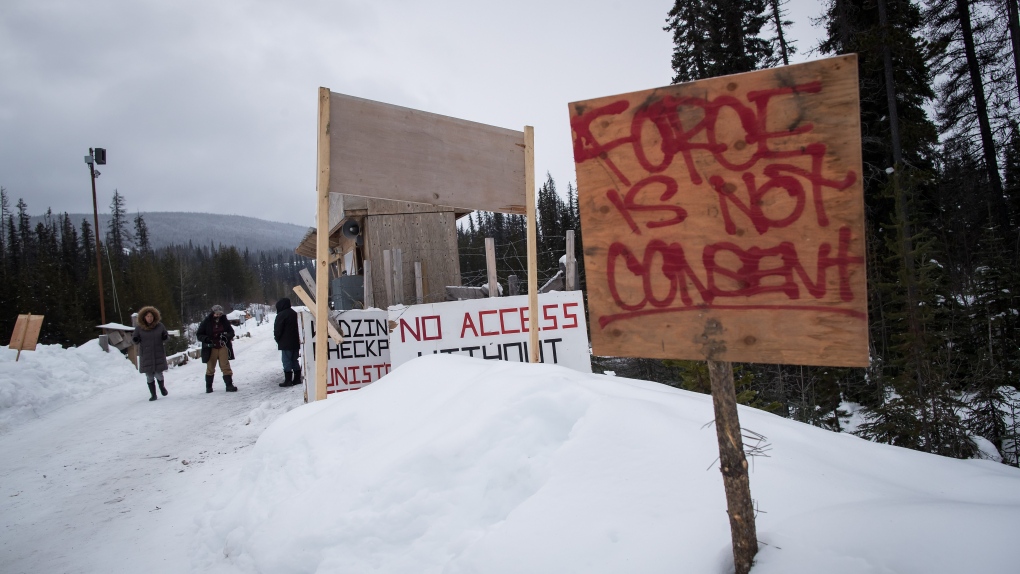 A checkpoint is seen at a bridge leading to the Unist'ot'en camp on a remote logging road near Houston, B.C., Thursday, Jan. 17, 2019. THE CANADIAN PRESS/Darryl Dyck

A First Nation in British Columbia is taking the RCMP and others to court over alleged harassment at protest sites.

Members of the Gidimt'en Clan of the Wet'suwet'en Nation said Thursday they'd filed a notice of civil claim against the police organization. Also named in the lawsuit is B.C.'s Minister of Justice, the Coastal GasLink pipeline project and a private security firm called Forsythe.

The nation said the lawsuit follows "months of targeted harassment and intimidation, through which hundreds of police and private security personnel have attempted to coerce Wet'suwet'en people into abandoning homes and village sites on unceded Wet'suwet'en territory."

The group claims security personnel have "followed, surveilled and intimidated" clan members, and that police are threatening and assaulting members.

A spokesperson for the Gidmt'en Checkpoint near the site of the Coastal GasLink project in British Columbia, alleged those named in the suit have destroyed and stolen property, and interrupted ceremonies and cultural practices.

"Basically, they're trying to drive us off our territories and make it unbearable to occupy our territory and engage in our cultural practices," Sleydo' said in an interview with CTV News.

Earlier this month, 15 people were charged with criminal contempt of court tied to protests that happened in the fall.

Ten others may also be charged, and two will not be prosecuted. Court documents suggest all 27 were arrested in a span of six days on a forest service road near Houston, B.C., which leads to the Coastal GasLink worksite.

Those charged are alleged to have breached another injunction granted in 2019 that prohibited blockades and interference.

The Coastal GasLink project involves the construction of a 670-kilometre pipeline that will carry natural gas across northern B.C. to the LNG Canada terminal in Kitimat.

Once at the terminal, the gas will be liquefied and shipped to international customers.

The work led to protests across Canada in the weeks before the COVID-19 pandemic took hold, with some arguing the project violates the Wet'suwet'en hereditary chiefs' traditional laws.

The elected council of the First Nation and others in the area agreed to the construction project.

Russian forces launched new strikes on Ukrainian cities Saturday as Kremlin-orchestrated votes took place in occupied regions to create a pretext for their annexation by Moscow, while hundreds of people were arrested in Russia for trying to protest a mobilization order that commits more troops to the fight in Ukraine.