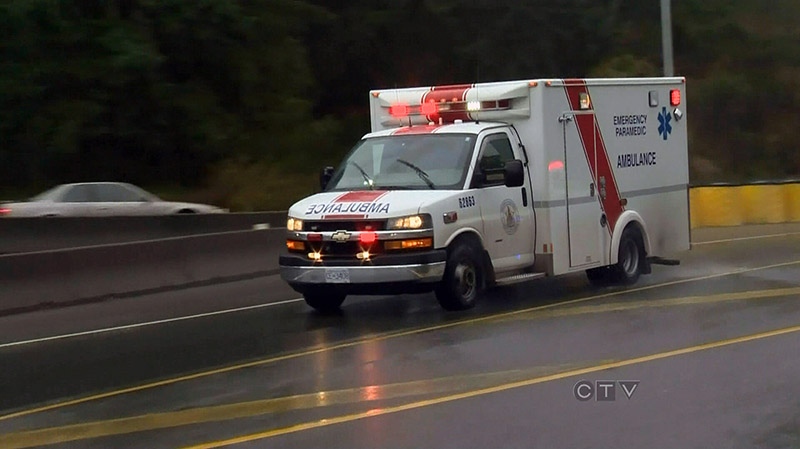 Patient safety is at risk in BC due to changes to the 911 dispatch system. An ambulance rushing to scene in this undated file photo.

VANCOUVER - Patient safety is at risk in British Columbia because of changes to the 911 dispatch system, says a fire chief who has instructed city staff not to call an ambulance during medical emergencies.

Nick Delmonico of the Port Coquitlam Fire Department said aspects of a so-called clinical response model adopted by BC Emergency Health Services last May are ineffective, leaving people waiting too long for an ambulance while firefighters are not contacted in many situations.

Both firefighters and an ambulance crew previously responded to 911 calls in B.C., but firefighters are now dispatched only if paramedics can't attend a call within 10 minutes, though Delmonico said the reality has turned out differently.

Dispatch systems vary widely across the country and within provinces, with firefighters in some departments trained as paramedics who respond to more serious medical issues.

Neil Lilley, spokesman for Emergency Health Services, said British Columbia's policy avoids doubling up on resources as part of a first-of-its kind model in Canada that is similar to those used in other countries, including the United Kingdom, Australia and New Zealand.

Delmonico, a former medical rescue chief for Vancouver and a one-time member of the Emergency and Health Services Commission before it was renamed BC Emergency Health Services in 2013, said an attempt to save resources has eroded patient care that could be provided by firefighters, who typically arrived ahead of paramedics before the change.

“The head scratcher for us is not including fire in high-profile calls that they can't make it to in a certain amount of time,” said Delmonico, who recently wrote a memo instructing staff at city facilities to specifically ask for firefighters when they call 911 for medical incidents.

“I believe this is important information to ensure prompt response to the citizens using our facilities, as well as assist staff who may need assistance because they are alone trying to address the patients' medical needs during these long waits,” he said in the memo.

Delmonico said he was frustrated after several recent incidents, including a drug overdose at a recreational centre, where he said two young employees waited too long for an ambulance after finding a semi-conscious man on a bathroom floor “surrounded by needles and a bunch of white powder.”

“The next morning I got called by their manager and she said, 'This happened in our facility last night. Why didn't fire attend?' I said 'I have no idea. We were not called.' This kind of stuff is happening in our facilities and I said enough is enough.”

On Feb. 26, an ambulance responded two hours and 47 minutes after staff at a rec centre called 911 when a woman experienced chest pain, Delmonico said, adding staff finally phoned their boss, who happened to be in a meeting with him, and he dispatched firefighters who arrived before the ambulance.

Jeff Freeze, a firefighter in Kamloops, said he realized the impact of the policy on Feb. 11, when his 16-year-old son Cohen was slammed into the boards during a hockey game.

“He was fully spinal immobilized,” Freeze said. “I play hockey, and it was one of the ugliest things I'd ever seen.”

Freeze said the ambulance crew eventually transported his son to hospital, where he was assessed as having strained muscles in his neck and a separated shoulder.

The policy is based on a colour-coded system, with dispatchers categorizing calls into one of six colours to prioritize response. Purple is at the top for serious conditions, such as cardiac arrest, and blue is at the bottom for non-urgent calls that could be referred to a nurses phone line.

He supports parts of the policy change because all patients are no longer automatically taken to emergency rooms.

Lilley said ambulance response time has improved in all categories since the policy was implemented, including in Port Coquitlam, though the fire chief said Lilley is relying on data showing median response times instead of average response times.

“We've drawn from best practices across the world,” Lilley said. “Many different ambulance services have a response model similar to the one which we've introduced and it's around ensuring that we respond to the sickest patients as quickly as possible.”