Murder investigators are searching for clues after a B.C. father confessed in a chilling Facebook post to killing his wife, daughter and sister, then took his own life.

The apparent confession emerged as the Integrated Homicide Investigation Team attended a suspicious house fire that broke out on Llanberris Way in Popkum, B.C., east of Chilliwack, on Thursday.

It's believed the incident began with a police standoff. Witnesses reported hearing gunfire at around 7 p.m. followed by an explosion.

Shortly after, the home was engulfed in flames.

"It just sounded like a backfire," said Al Prystupa, who lives in the area. "You could see the smoke and then you could see all the lights at the intersection."

Neighbours told CTV News a husband and wife with a daughter live at the home, and during the standoff, police seemed to be ordering someone in the home to get out.

“There were about five shots and then the two explosions, and they had the bullhorns yelling at the guy to get out,” said neighbour Linda Anderson. “His name, and ‘You’re under arrest, come out with your hands over your head and we won’t hurt you.’”

Following up, police discovered a dead body at a home in Langley on Thursday.

The post also pointed to the home in Popkum as a potential second murder scene.

On Thursday evening, Randy Janzen – who neighbours confirmed as the father living at the home – appeared to post a confession to Facebook, claiming that he shot his adult daughter, Emily, after she experienced years of crippling migraines.

“Over the last 10 days I have done some of the worst things I could have ever imagined a person doing,” the post reads. “I took a gun and shot her in the head and now she is migraine free and floating in the clouds on a sunny afternoon, her long beautiful brown hair flowing in the breeze, a true angel.”

The father then confessed to killing his wife and sister.

“Then I shot Laurel because a mother should never have [to] hear the news her baby has died. Then a couple of days later my sister Shelly because I did not want her to have to live with this shame I have caused all alone,” Janzen wrote. “Now my family is pain free and in heaven. I have great remorse and feel like the dirt that I am.”

"This is a terrible tragedy and our thoughts are with the family during this very difficult time," the agency said in a statement, adding medical professional had been in touch with Janzen's family.

On Friday, the Chilliwack School of Performing Arts also posted to Facebook apparently mourning the death of Emily Janzen.

“Today we celebrate the incomparable Emily Janzen. A former student and instructor, forever a part of our CSOPA family,” the post reads. “We will fondly remember her bright smile, beautiful voice and amazing spirit. She will be greatly missed. Our condolences go out to all her family and friends.”

IHIT did not release the names of the victims, but did confirm that several members of one family including the suspect were killed.

“At this time, IHIT believes that this incident is not random and the suspect and victims were related to each other,” she said.

The tragedy marks the sixth case of domestic murder in B.C. in just two months, leading one women’s group to declare a crisis in the province.

Daisy Kler of Vancouver Rape Relief & Women’s Shelter said she’s concerned 2015 could turn out even worse than last year, when 14 women were murdered by their husbands or boyfriends.

“That was a record high in the last five years,” she said. “We do not want another record high year.”

Kler said the government doesn’t even bother to track or collect data on domestic murders in the province, a gap she believes betrays a “lack of political will” and leadership on the issue of violence against women.

“Frankly, now I’m beginning to think: Do they even care?” Kler said.

Stephanie Cadieux, B.C.’s Minister of Children and Family Development, was not available to comment Friday.

Anyone with information on the Chilliwack murders is asked to call the IHIT tipline at 1-877-551-4448. 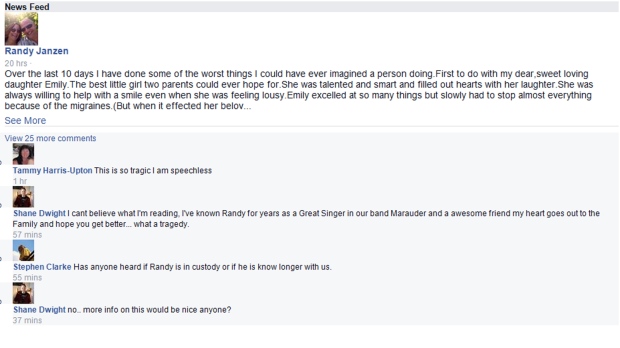