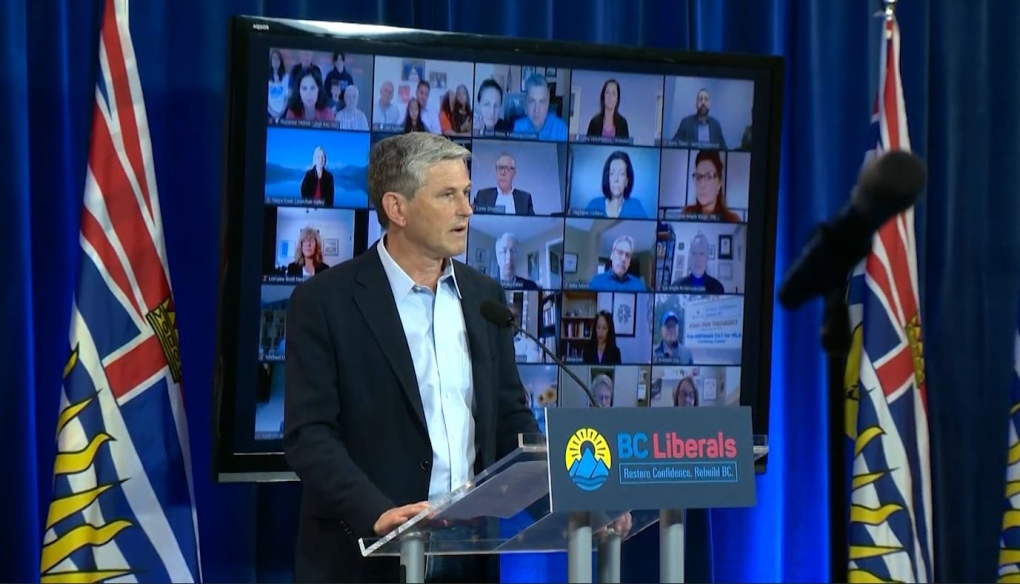 BC Liberal leader Andrew Wilkinson speaks at a campaign event on Saturday, Sept. 26, 2020.

It's not the feeling that might be expected from a leader who has spent much of the campaign on the defensive, but Wilkinson said he pays no heed to the pundits.

“We're feeling very good because the reception we get at the doorstep from the community is exceptionally strong,” he said in an interview this week.

“The only poll that counts is the one that's counted on election night and two weeks after,” he said, referring to the later count of the mail-in ballots.

But for some political scientists, the course of the Liberal campaign has revealed an identity crisis that the party will need to grapple with no matter the outcome of the vote.

From the outset of the snap election, both the Liberals and Greens have been challenged with trying to gain seats in the unusual context of a global pandemic.

Still, Wilkinson said he believes the party's biggest promises have landed well. A pledge to cancel PST for a year then reduce it to three per cent, as well as the cancellation of a two per cent small business income tax are resonating with voters, he said.

“The other is the affordable daycare plan, which a lot of people took as a surprise coming from the B.C. Liberals but to which we're completely committed to get our economy moving again.”

However, as the party announced some of those policies its campaign was often distracted by controversies.

The day Wilkinson unveiled the party's platform, media attention was focused on a video circulating of a Liberal candidate making sexist remarks about an NDP candidate while Wilkinson and other Liberals laughed along. Soon after, Liberal candidate Laurie Throness likened free birth control to eugenics before resigning from the party.

The Liberal party's own membership chair, Nicole Paul, criticized its leadership on Twitter for not acting more quickly against Throness, who remained in the caucus earlier this year after defending conversion therapy.

“The BCLP doesn't have a Laurie Throness problem. We have a problem in the leadership of the party and their lack of willingness to stand up for diversity, inclusion and the values of BC Liberal members - not just the interests of a small group of constituents,” tweeted Paul, who could not be reached for comment.

Stewart Prest, who teaches political science at Simon Fraser University and Douglas College, said the party was often defending itself when it should have been asserting its plans to govern.

“I think they've had a number of challenges, I don't think there's any way to sugarcoat that. They're not necessarily related to the platform but the way in which the party has been continually pulled off message through controversies surrounding candidates,” Prest said.

Hamish Telford, who teaches political science at the University of the Fraser Valley, said the controversies have highlighted a rift in the party, which has typically brought together both federal Liberals and Conservatives.

“They've had a pact that they will focus on economic issues - low taxes, low regulation - and they will put aside social issues particularly divisive issues on key policies around gender identity, abortion, things like that,” he said.

With those issues at the fore, socially conservative B.C. Liberals are vocalizing their thoughts and the more liberal members are showing very little tolerance for that.

“There's been a real breach, I think, in the B.C. Liberal party coalition,” he said.

Campaigning during a pandemic when there's widespread support for government intervention puts the party, which has typically held together under a free-market umbrella, in an awkward position, he said.

Prest said the coalition was also kept intact by the promise of regular trips to power over the 16 years the Liberals were in government.

“The party has to spend some time thinking about what kind of party it wants to be,” Prest said.

Both Prest and Telford agreed that the Liberals have successfully highlighted weaknesses in the NDP record and what it criticized as a relatively tepid $1.5-billion economic recovery plan. The Liberal party has fallen short, they said, in articulating a clear vision for a better option.

“We think the ballot question is who actually has got a proper plan to get us out from this COVID recession and we've seen basically nothing from the NDP,” he said.

“We're presenting a cogent program to get people back to work and get recovery in industries like tourism and hospitality.”

Wilkinson also dismissed the controversies over his candidates as “gotcha issues” that happen in any political campaign, adding that every party has dissenting voices.

As a big tent party, the B.C. Liberals' goal is to provide the strongest possible alternative to the NDP by casting a wide policy net, from $10-a-day daycare for low income families to opening the public auto insurer to competition. It has a strong identity centred on building an entrepreneurial society that will generate the growth necessary for economic recovery from the pandemic, he said.

“We feel that the people who support us know exactly what they want and we provide the vehicle to do that.”

This report by The Canadian Press was first published Oct. 22, 2020.