B.C. driver pulled over with missing tire on 4/20 was likely on drugs: RCMP

B.C. driver pulled over with missing tire on 4/20 was likely on drugs: RCMP 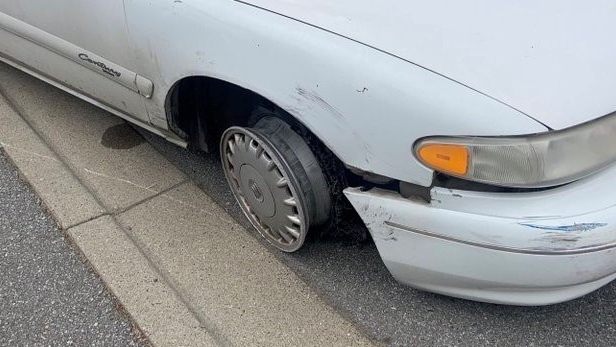 A car with a missing front passenger-side tire is seen in an image provided by White Rock RCMP. (Handout)

A woman pulled over for driving without a front tire in White Rock, B.C., last week was likely impaired by drugs, according to police.

Authorities said they located the Langley resident after receiving multiple 911 calls about a vehicle swerving on Marine Drive on the afternoon of April 20, a date celebrated by cannabis smokers and advocates.

Officers arrested her and brought her to the White Rock RCMP detachment for testing by a drug recognition expert. Police did not reveal what substance they suspected the driver had been using.

It's also unclear how the car ended up without a front passenger-side tire, though investigators said the same vehicle appears to have been involved in a collision in Langley about an hour earlier.

Const. Chantal Sears told CTV News she couldn't confirm whether the driver was aware the tire was missing prior to her arrest.

"I don’t know her mind-state," Sears said Monday. "It sounds like she was fairly impaired, and she may not have known that."

The woman, who is in her 40s, is facing possible criminal charges, White Rock RCMP said. Her car was also impounded.