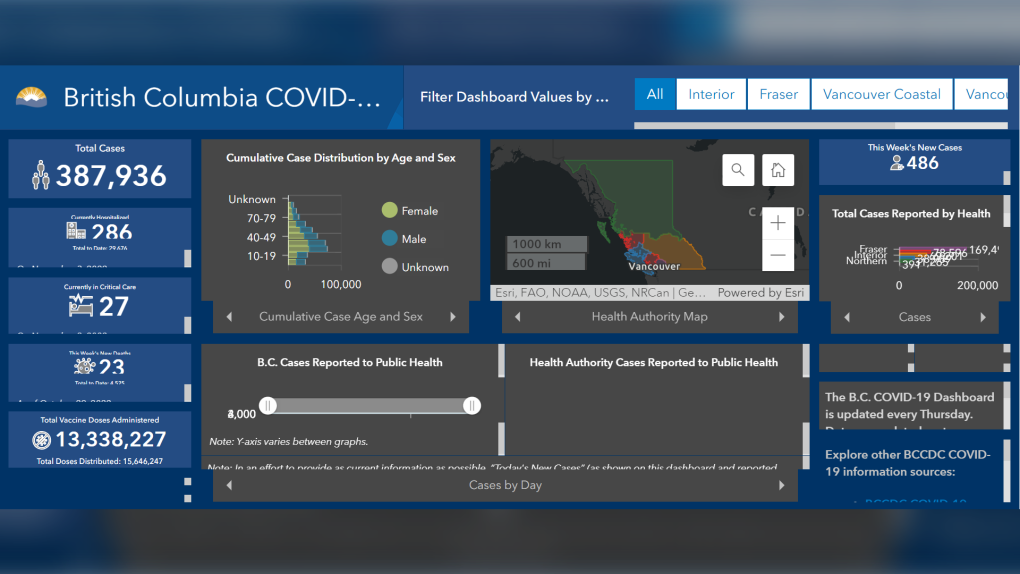 The B.C. Centre for Disease Control says it is working to "better quantify" COVID-19 reinfections, which are not currently accounted for in the province's pandemic data.

"Cases are linked to the first positive COVID-19 PCR test result and don’t currently capture cases caused by reinfections," the BCCDC said in an email to CTV News Friday.

That means someone who tested positive in the early days of the pandemic, recovered, and then tested positive again this week would not be included in the weekly case count when it's released next Thursday.

The BCCDC did not elaborate on how or when it planned to address the issue, saying only that it's working with the Provincial Health Services Authority "to update the data system to better quantify COVID-19 reinfections."

HOW CASES ARE COUNTED

The lack of accounting for reinfections is one of several ways in which B.C.'s COVID-19 case data amounts to an incomplete picture of coronavirus transmission in the province.

While testing was recommended for anyone with symptoms in the early days of the pandemic, the province's testing strategy has grown more and more targeted over time.

Today, lab-based PCR testing is only recommended for people for whom a positive result will affect decisions about treatment. The eligible group includes only those at risk of severe illness who could benefit from an approved COVID-19 treatment, those who are pregnant, and those who are hospitalized.

For everyone else in B.C. who has symptoms, home-based rapid antigen testing is the only publicly funded option.

The BCCDC only collects and reports data on lab-based tests, not rapid antigen tests, meaning the vast majority of B.C. residents who test positive are not accounted for in the official total.

The independent B.C. COVID-19 Modelling Group has estimated that the province's case counts are off by 100-fold, and the BCCDC's own recently published research places the number at 92-fold.

Both of those estimates are based on serology testing, which looks at antibodies in blood samples to determine whether someone has had the coronavirus.

The latest seroprevalence data from the national COVID-19 Immunity Task Force suggests a little more than 60 per cent of B.C. residents had been infected with COVID-19 as of September of this year.

WHAT EXCLUDING REINFECTIONS MEANS FOR THE DATA

In one way, the BCCDC's dramatic undercounting of overall infections helps to make up for the non-counting of reinfections.

A person who tested positive on a rapid antigen test in January during the first surge of the Omicron variant of SARS-CoV-2 was not included in the official case count at that time, so if they are hospitalized this week and test positive on a PCR test, the system will record their reinfection as a first infection for statistical purposes.

In their recent paper on seroprevalence, BCCDC researchers write that they expect the exclusion of reinfections "to have had minimal impact" on their work.

Sarah Otto, a UBC biomathematics professor and a member of the modelling group, told CTV News in an email this week that she believes the lack of accounting for reinfections is already exacerbating B.C.'s undercounting of coronavirus cases.

Over the last two weeks, the BCCDC has reported its lowest weekly totals for new, lab-confirmed COVID-19 cases since it switched to weekly reports in early April.

When CTV News asked whether there had been a change to data collection procedures that might explain the declining numbers – which come at a time when health officials have been predicting a "fall surge" – the BCCDC said "there is no indication that there are any new issues with the data."

The undercounting of reinfections is not a new issue, but it's also unlikely that it's entirely responsible for the recent decreases in reported cases and hospitalizations.

For one thing, wastewater surveillance in the Lower Mainland has mostly shown stable or declining concentrations of the coronavirus over the last few weeks.

For another, the BCCDC says its accounting of patients currently in hospital with COVID-19 is based on the patient's most recent test result, not their first one, which means reinfections are captured in that number.