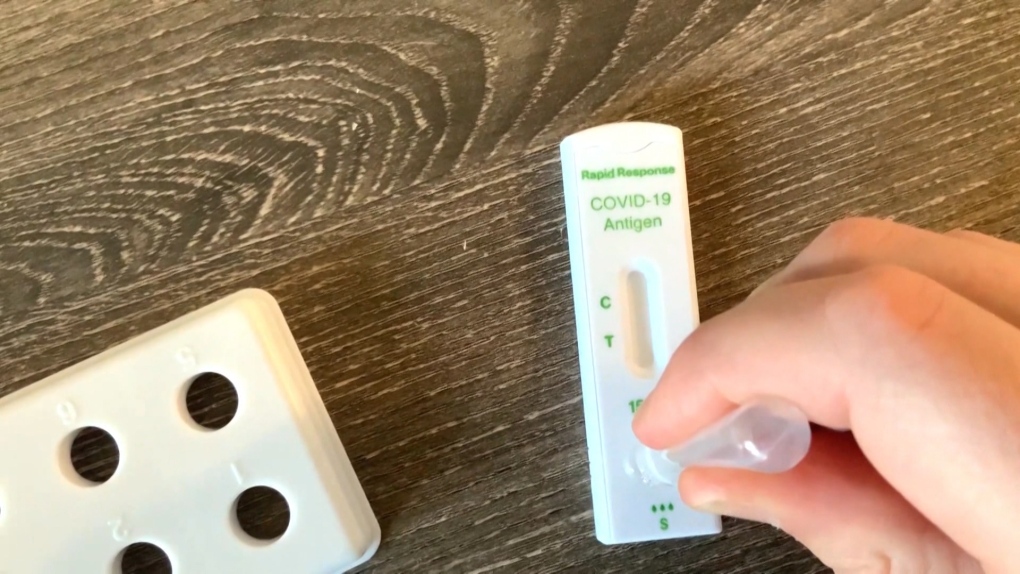 There were 410 COVID-19-positive patients in B.C. hospitals Thursday, an increase of nine from last week, but within the same general range the province has seen since mid-July. 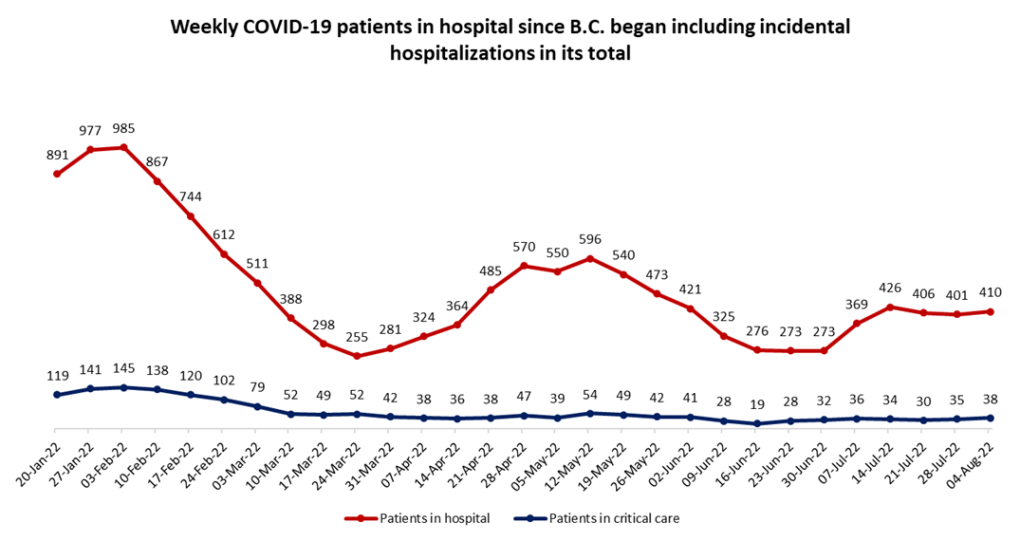 This graph shows the number of test-positive patients in B.C. hospitals on Thursdays since the province switched to a "hospital census" model in January. (CTV)

Hospitalization totals in B.C. include both those who have serious cases of COVID-19 requiring hospital care and those who are admitted to hospitals for other reasons and test positive incidentally.

Since the province switched to this "hospital census" model for counting hospitalizations, there have been as many as 985 test-positive patients in B.C. hospitals and as few as 255.

The Health Ministry cited high numbers of incidental hospitalizations, along with the lack of comprehensive testing and waning vaccine immunity as reasons why the B.C. Centre for Disease Control recently stopped reporting case outcomes by vaccination status on its COVID-19 Surveillance Dashboard.

The BCCDC reports 983 new, lab-confirmed cases of COVID-19 for the week of July 24 to 30, the most recent full "epidemiological week."

Like the hospital census, that total is a slight increase from what the BCCDC reported last week, when there were 921 new cases confirmed.

New case totals include only "lab confirmed, lab probable and epi-linked" cases, according to the BCCDC, meaning the vast majority of people who caught the coronavirus during the week in question – who did not qualify for a PCR test under the province's current testing strategy – are not included.

Wastewater surveillance can help approximate this unaccounted-for spread, though the province only tracks coronavirus concentrations in wastewater in Metro Vancouver.

The BCCDC's latest "situation report" shows notable increases in viral loads at the Annacis Island, Iona Island and Northwest Langley plants during the week that ended July 30, but viral loads have been decreasing at the Lulu Island and Lions Gate plants.

"There is no evidence of a consistent pattern of changes in COVID-19 incidence across the region," the report reads.

The data released Thursday comes as the province begins its vaccination campaign for children under age five.

As of Wednesday, the Health Ministry said 13,606 of the estimated 208,000 B.C. children between six months and five years old had been registered with the provincial "get vaccinated" system, and 8,202 had been booked for appointments. That works out to 6.5 and 3.9 per cent of the age group, respectively.

During the week that ended July 30, according to the BCCDC, the province administered 27,242 doses of COVID-19 vaccine. That total does not include any vaccines administered to children under age five, who first became eligible for vaccination on Aug. 2.

Most of the new doses administered during the week – some 20,028, or roughly 74 per cent – were second boosters.

Notably, the total number of shots administered from July 24 to 30 was significantly lower than the previous week, and the lowest weekly total the province has seen since the week of April 3 through 9.

Health officials have been urging vaccinated B.C. residents to wait to get their next vaccine doses until September, when the province plans to launch a "fall booster" campaign.

As of July 31, 88 per cent of B.C. residents of all ages had received at least one dose of a COVID-19 vaccine, and a total of 85 per cent had received two shots, according to the surveillance dashboard.

Uptake of booster doses has been considerably lower, however, with 54 per cent of the total population – or 62 per cent of adults 18 and older – covered.

The BCCDC has not published data on fourth doses administered outside of the 70-plus age group. Among those in that age group, 56 per cent have received a fourth dose or second booster.

A child welfare worker is telling a coroner's inquest that had she known an Indigenous teen in her care had a history of suicidal thoughts and self-harm, she would have tried to talk to him about it.