VANCOUVER -- B.C. could face extreme economic impacts as a result of the COVID-19 pandemic, with a possible deficit in the billions.

Finance Minister Carole James gave an update Tuesday on the province's financial situation in the wake of the ongoing health emergency.

One scenario snapshot from the finance ministry – which James said was the province's "most likely economic scenario" – suggests that because of revenue losses, combined with relief measures, B.C. could face a deficit of about $12.5 billion.

"This could be the worst downturn experienced in our province in recent history," James said. "The projected numbers are staggering, but they're not without hope."

Even so, James said "now is not the time" to cut back on spending and services in B.C., particularly as the province looks to recover.

"That doesn't mean we aren't looking at our spending," James said. "We will be heading into the budget process in the fall, we will of course be looking to make sure every cent we spend is spent wisely."

As James noted in her presentation, B.C.'s first case of COVID-19 was recorded on Jan. 28. About six weeks later, the World Health Organization declared COVID-19 a pandemic and B.C. began its record-breaking state of emergency about a week after that.

Over the past several months, James explained, the province has seen its highest unemployment rate since 1987, thousands of jobs were lost and consumer spending has plummeted.

More specifically, retail sales dropped 23.6 per cent from February to April of this year and there were 235,100 fewer jobs in June than in February.

"The job losses have also been widespread…there's no question that COVID-19 impacts British Columbians unequally," James said, adding that job losses have been "concentrated" in wholesale, retail, accommodation, food and construction sectors.

The housing market also saw some volatility, James said, with sales down more than 45 per cent from February to May and average prices dipping by about four per cent.

But as B.C. looks towards economic recovery, several factors make it hard to predict how long that will take. Future outbreaks in the province and with B.C.'s trading partners are possible, for example. As well, public health policies could change and consumer confidence is unpredictable.

"I can't emphasize enough the challenges in preparing any kind of scenario right now," James said. "We've developed a scenario, rather than a typical forecast, because of the unprecedented nature of COVID-19."

To get an idea of how B.C.'s economic situation might develop, James presented the snapshot, which she says isn't a typical forecast and is "subject to considerable uncertainty and revision." 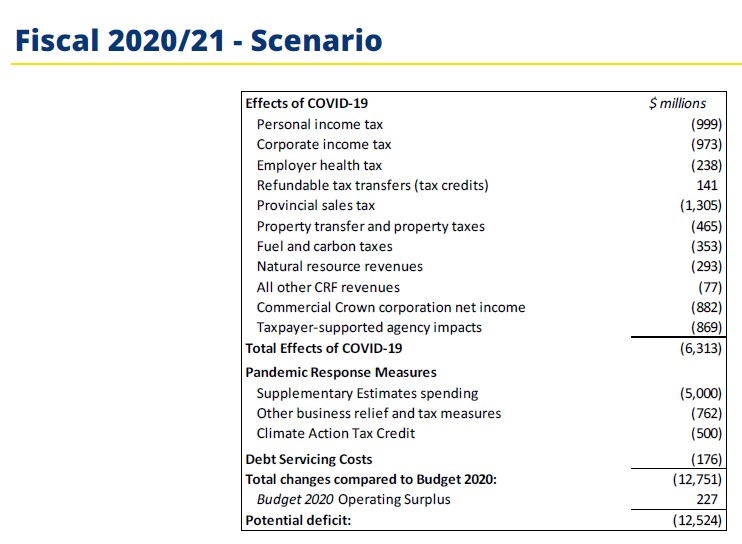 James said the scenario, which suggests B.C.'s economy could decrease by about 6.8 per cent in 2020, assumes the pace of hiring will be "cautious," that physical distancing remains in place, that global travel "remains somewhat restricted" and that retail and tourism businesses will still be impacted.

The $227-million surplus noted in the scenario was previously predicted when the province released its annual budget in February.

James said there has been an increase in borrowing, but maintained "the province's debt remains affordable," and that the debt burden remains low compared to previous years.

"We've been very fortunate we've had in B.C. one of the best debt metrics and credit ratings compared to other provinces in Canada, which again puts us in a very good position to be able to deal with the recovery," James said.

Last month, the province introduced legislation to allow B.C. to run deficit budgets for the next three years.

"I think that's the prudent thing to do, but I don't think anyone at this stage can look ahead and say how long the recovery's going to take and when we'll see shifts because this isn't simply a British Columbia issue, this is in fact a global issue," James said.

She also said the province is in a period of public consultation on what steps B.C. should take in its economic recovery plan and a recovery framework is set to launch in September.