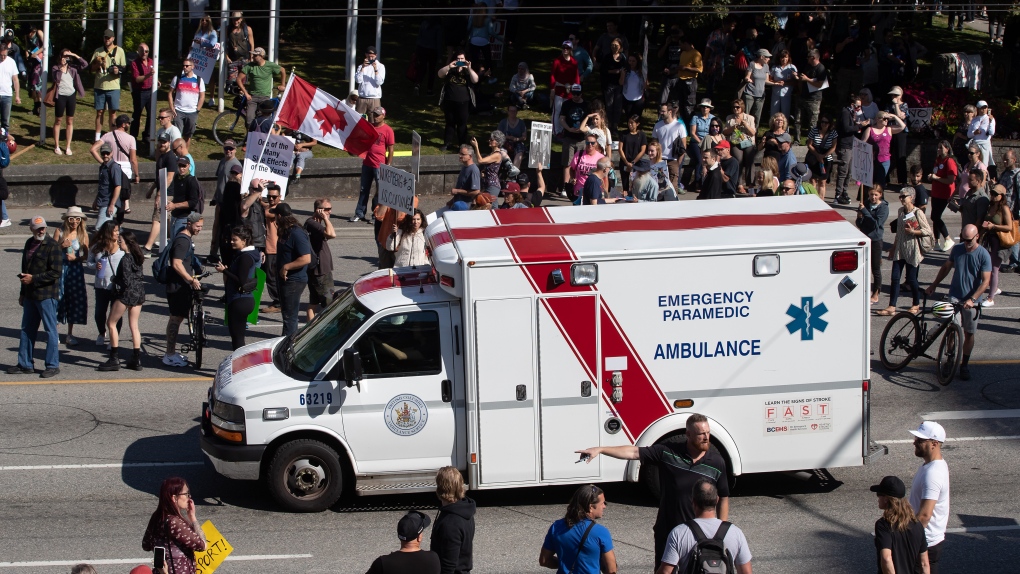 An ambulance passes through a crowd of people protesting COVID-19 vaccine passports and mandatory vaccinations for health-care workers, in Vancouver, on Wednesday, Sept. 1, 2021. (Darryl Dyck / THE CANADIAN PRESS)
VANCOUVER -

The B.C. government is considering tougher laws to discourage anti-vaccine protesters from disrupting the daily operations of schools and hospitals in the province, Premier John Horgan said Thursday.

Vaccine opponents have been involved in a number of concerning demonstrations in recent weeks, including last Friday, when protesters allegedly barged into several schools in Salmon Arm.

District officials were forced to place the schools under "hold and secure" measures as a result, meaning children weren't allowed to enter or leave for the remainder of the school day.

"I think all British Columbians are perplexed that people who have a different point of view – a minority view – would choose to disrupt children in education settings or patients in health-care settings to get their point across," Horgan said.

"I'm hopeful that we've seen the last of that type of behaviour but we want to ensure that that doesn't happen again."

The "hold and secure" measures imposed last Friday in Salmon Arm continued through Monday, which was a scheduled professional development day.

When students returned on Tuesday, the district said it had "encouraged schools to limit their number of entry points," and to keep main entrances locked after the opening bell.

There were also the Sept. 1 protests staged outside several B.C. hospitals, including Vancouver General Hospital, which prompted angry backlash as reports emerged of patients having difficulty accessing their appointments. A number of health-care workers also shared their frustrations over the decision to hold loud demonstrations directly outside the buildings.

During a subsequent election campaign stop in Vancouver, Justin Trudeau promised the Liberals would introduce tougher laws to prevent protesters from blocking access to hospitals or intimidating employees.

“To know that a nurse, going into a late shift, crossing a parking lot, might be afraid that there’s going to be someone there to spit on her or shout obscenities at her – that’s not OK,” he said at the time.