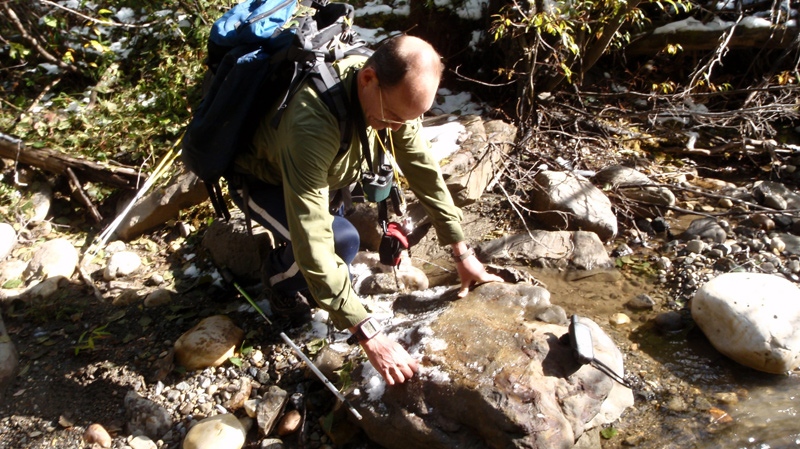 Dr. Charles Helm looks at a fossilized footprint of a dinosaur at a dig site in British Columbia in this handout photo. (Richard McCrea / THE CANADIAN PRESS / HO)

Scientists are accusing Premier Gordon Campbell's Liberal government of allowing the province's prehistoric heritage to be ground up for cat litter.

International and B.C. paleontologists say the government has a Stone Age attitude that contributes to the destruction of the province's vast fossil heritage.

British Columbia is the only province in Canada with fossil sites that doesn't have a dedicated law protecting the sites from plunder or industrial exploration.

And while the B.C. agriculture minister acknowledges there are "gaps" in the patchwork of laws covering the sites, he couldn't promise new legislation would be in the works.

The issue has come up again after Tumbler Ridge paleontologist Richard McCrea said last week he has found a major fossil site in northeast B.C. which he is keeping quiet about because he's concerned it will be plundered.

"There are two claims on the McAbee, one by the fossil dealers and one by the miners who are grinding up the fossil-bearing shale," he said.

Archibald is calling on the government to assume ownership of the site, including the areas claimed by the fossil dealers and cat-litter miners.

"The province has ignored paleontology to a great degree (and) other jurisdictions have embraced it," he said.

"The result is not just that things are sitting here undone, the result is there's a great negative impact of destruction and loss. Once these things are lost, you can't grow them back or reimport them. They are gone forever."

Other provinces have used their paleontological heritage for scientific and economic gain, said Archibald, citing Alberta's Tyrrell Museum and the Royal Ontario Museum.

Gareth Dyke, a paleontologist with the University of Ireland, wrote Campbell in 2009 with concerns about non-scientific activity at the McAbee site.

"I'd like to highlight the fact that despite the importance of this globally unique fossil site, the McAbee remains almost completely unprotected by the current management plan, which leaves it under the control of commercial fossil dealers and an operation that grinds the fossil-bearing shale into Kitty Litter."

Agriculture and Lands Minister Steve Thomson said there is a memorandum of understanding in place the protects the most significant fossils at the McAbee site.

Thomson said the government recently completed a public consultation process that examined a fossil management framework, but its results and recommendations have yet to be made public.

"We know there are some gaps with the process," he said.

But Thomson would not promise new legislation government heritage protection.

"It may be around ensuring using the tools that we have," he said.

"The whole thing for paleontology for British Columbia is a major black eye for the province," he said. "They look at it as an expense. They don't see the value in it."

McCrea said he tells people he meets on his expeditions that he's a geologist looking for coal seams because he doesn't want to tip them off that there may be dinosaur fossils in the area.

McCrea recently found what he believes is a major dinosaur fossil area near Tumbler Ridge in northeast B.C. He said he found on the surface bones from meat-eating and plant-eating dinosaurs, leading him to speculate there is much more just under the surface.

McCrea, who operates on a $152,000 annual grant from the municipal government in Tumbler Ridge, said a local helicopter company is flying him to the remote site this week where he plans to spend Thanksgiving weekend taking a deeper look at his potential find.