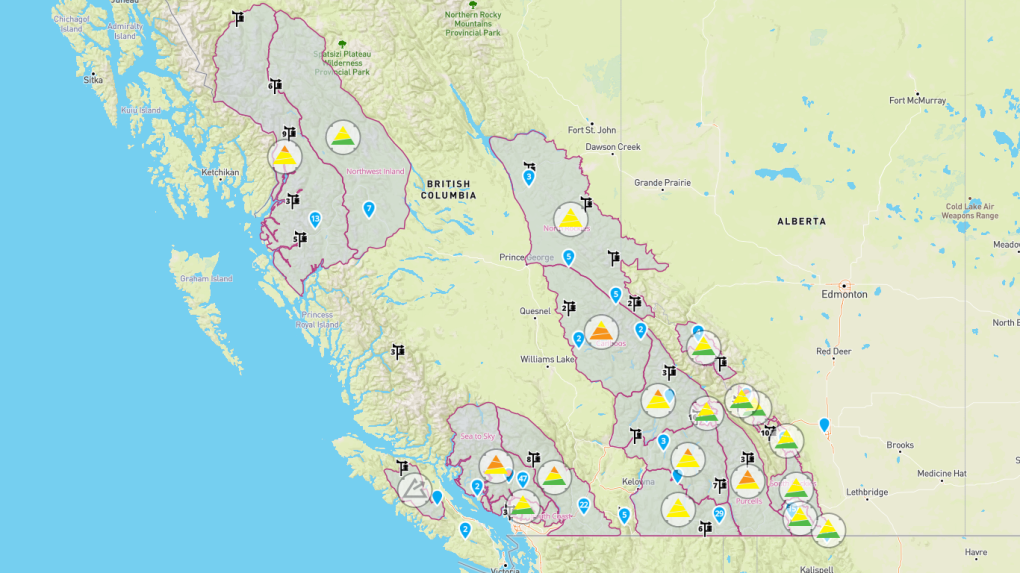 Avalanche notifications are shown on a map from Avalanche Canada on Tuesday, Dec. 29, 2020.

REVELSTOKE, B.C. -- Avalanche Canada has lifted a recent warning about the extreme potential for slides on eastern British Columbia mountains, but backcountry users are urged to remain cautious because of weak snowpack layers across the province.

Areas of avalanche concern include the Purcell range in the southeast, Cariboo Mountains in central B.C., and slopes around the Sea-to-Sky region north of Vancouver.

The forecaster reported large, human-triggered avalanches Sunday along sections of the Cariboo Mountains near Valemount, and Monday on Rainbow Mountain, near Whistler.

In the Rainbow Mountain event, Avalanche Canada says in an online post that a skier was completely buried but was successfully rescued by others.

No one was hurt, while avalanche experts say several human-triggered slides around the treeline happened Sunday northwest of Valemount as weak snow layers at lower elevations raise the risk to considerable.

Multiple weak layers at several depths of the snowpack have also raised the slide risk to considerable the alpine and treeline of the Purcell range outside Golden, with conditions unlikely to improve until Friday.