The province's auditor general released a report Thursday that shows expense policies in the offices of B.C.'s top legislature officials were weak, non-existent or ignored.

The 34-page report follows months of finger-pointing in a spending scandal that saw two officials suspended due to concerns raised by the Speaker.

The auditor general's office reviewed thousands of expenses from the offices of the Speaker, clerk and sergeant-at-arms from April 2016 to December 2018. In total, $2.2 million in expenses were examined.

"In this audit, we found a number of weaknesses and gaps in the expense policy framework, and where policies were in place, they weren't always followed," Auditor General Carol Bellringer wrote in "Expense Policies and Practices in the Offices of the Speaker, Clerk and Sergeant-at-Arms."

"The fact that it was so widespread was a surprise," Bellringer told reporters at the B.C. Legislature.

The lack of controls resulted in questionable spending, examples of which include: 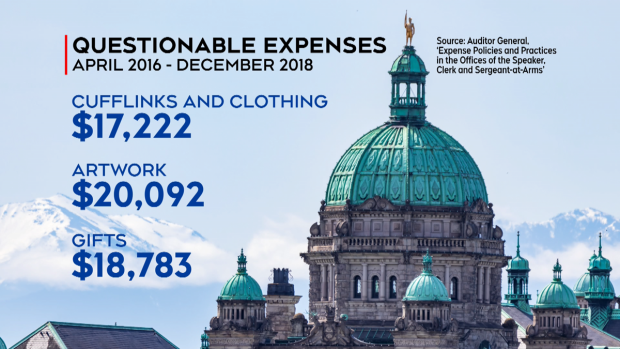 "We found that travel expenses were frequently made without clear documentation to support the purpose of travel, some expenses were made without appropriate approval, and purchases of items such as clothing and gifts were made in the absence of policy to guide those transactions," Bellringer wrote.

Clerk Craig James and Sergeant-at-Arms Gary Lenz were escorted from the legislature in Victoria on Nov. 20, 2018 and made headlines for months as details of purchases including VIP trips and a $13,000 wood splitter and trailer were made public.

Both men denied the allegations of misspending, but James was found by former Supreme Court justice Beverley McLachlin to have "engaged in misconduct." She did not find misconduct in her investigation into Lenz, who hopes to return to his job. James announced in May he was leaving his job citing the impact on his family and reputation.

McLachlin's report also suggested there was a lack of accountability and culture of entitlement at the legislature.

The independent report by the auditor general comes 10 month after the suspensions.

Asked about the latest report into the ongoing scandal, Premier John Horgan noted his office was not responsible for legislature oversight – that's the responsibility of the Legislative Assembly Management Committee. In 2012, Horgan was part of that and he told reporters he raised similar concerns then.

"That we had a big huge hole that you could drive a truck through and that was a lack of accountability for the clerk and the activities of the clerk and staff. There was no oversight other than that of the clerk," he added.

Other spending in the report that raised eyebrows came from the man who actually was the catalyst for the report – Plecas. It found, over the course of year, travel expenses in his office tripled.

View a larger version of the graphic in the full report below.

"It really is kind of shocking when you position that against the concerns that have been raised by the speaker," she said.

Asked for comment, the Speaker said more information will be released Friday.

Bellringer announced in January that she'd started a deep audit into the issues. She wrote that the document released Thursday is the first in a series of reports on the Legislative Assembly.

However, she announced she was doing a performance audit – that is looking at controls and their effectiveness – and not doing a forensic audit, the type that typically reveals fraud.

In a statement released by Speaker Darryl Plecas, he expressed disappointment:

The Speaker went on to say he accepted all the recommendations, with the report noting action was already underway.

Her recommendations to the legislative assembly are as follows:

The legislative assembly's response was included in the report. The group said it would use the audit to inform "substantive financial and policy reforms," and that it accepted that the audited offices were not adequately governed.

Future reports from the auditor general will examine purchasing cards, compensation and benefits, as well as asset management and overall governance.

Read the full report below.

Expense Policies and Practi... by CTV Vancouver on Scribd