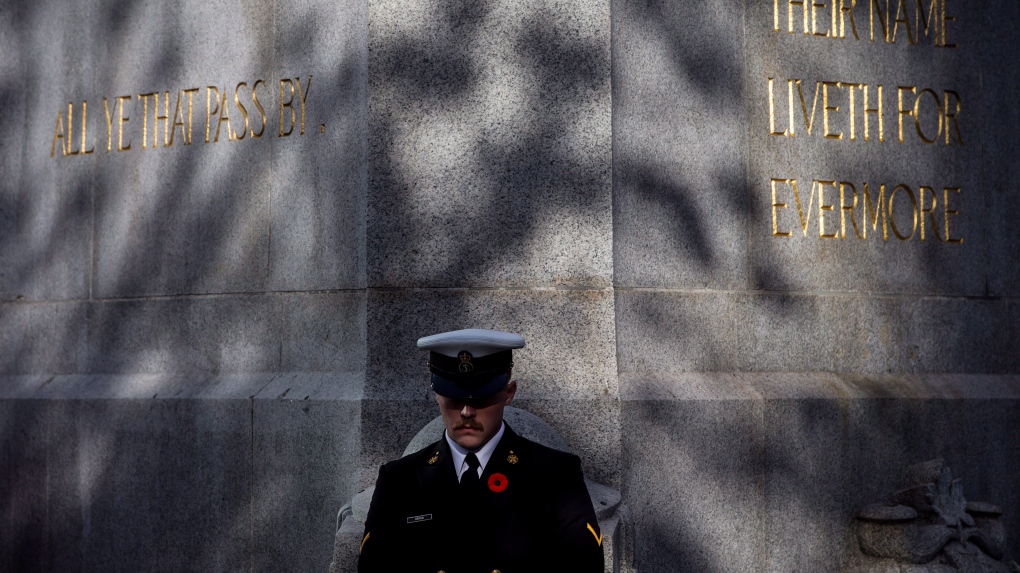 VANCOUVER -- Honouring Canadian veterans, including those who paid the ultimate sacrifice for their country, will look different this year than most.

While the Royal Canadian Legion's B.C. and Yukon Command lists more than a hundred ceremonies taking place across the province next Wednesday, they are expected to be much smaller than usual as organizers strive to follow pandemic safety precautions.

That means attendance at each event is by invitation only.

"Unfortunately, because of COVID-19, the general public are discouraged from attending Remembrance Day ceremonies this year," the Legion said on its website.

There will still be ways for people to observe ceremonies from home, including B.C.'s provincial Remembrance Day event at the cenotaph in Victoria's inner harbour, which will be live-streamed online.

Angus Stanfield, vice-president of Dominion Command, said they're expecting no more than 20 people to attend in person.

The 2020 ceremony, which marks the 75th anniversary of the end of the Second World War, nears as British Columbia grapples with surging COVID-19 numbers. Health officials have cautioned that higher cases means a higher risk of transmission.

In Vancouver, where Remembrance Day ceremonies normally draw thousands of people, the cenotaph in Victoria Square is being closed off to avoid drawing a crowd. City officials have urged residents to "remember in place" this year.

The Royal Canadian Legion has encouraged people to watch their local ceremony on TV or "on a local legion branch Facebook page."

The Surrey City Orchestra has also recorded a free 48-minute concert following the traditions of a Remembrance Day service, including a reading of In Flanders Fields. The event is already available to view online.

Given the threat of COVID-19, which is known to pose a greater risk of severe complications in seniors, the provincial health officer has also recommended cancelling all indoor events planned for Nov. 11.

That means post-Remembrance Day ceremony events at all B.C. legion branches have been called off this year.

"The days and weeks ahead bring much uncertainty," Val MacGregor, president of the B.C. and Yukon Command said in a news release. "While it pains me to ask our Command to take such drastic action, it is our duty to do our part to keep our Veterans, members and communities safe."

Local branches have been asked to remain closed throughout the day on Wednesday.