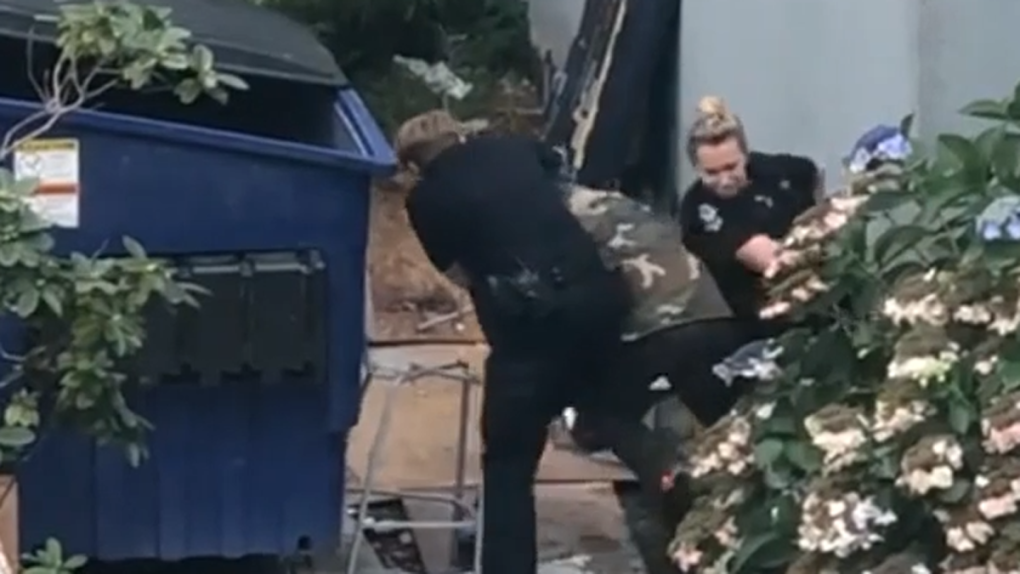 A still image from video posted to Reddit shows two members of the Vancouver Police Department attempting to arrest a suspect. The incident left both officers injured.

The two-minute cellphone video posted on Reddit shows a pair of female officers struggling with a suspect.

While the officers' backs are at times turned to the camera and large plant blocks some of the action from view, it's clear that the officers are struggling with a man in a camouflage shirt.

At one point, one of them appears to have him in a headlock. The other officer falls to the ground as the first wrestles with the suspect behind the plant.

The video cuts to another shot of a man in shorts intervening, then pointing a male officer toward something off screen.

The male officer runs off and the camera pans to show a man in camouflage running away with four officers in pursuit. One manages to catch the suspect, but then falls as the other three catch up and more reinforcements arrive.

While it may not be clear from the video exactly what's happening, Const. Steve Addison confirmed in an email to CTV News Vancouver that the incident shows an arrest Wednesday afternoon.

The women had been called to the Sunset Beach area around 5 p.m. for reports that a man was behaving erratically. It was reported that he was shouting and appeared to be hallucinating.

The account from the Vancouver Police Department of what happened next is that the man assaulted the officers.

One was scratched on her head and face, the VPD said. Her arm was injured, and at one point the suspect allegedly tried to take her gun out of its holster during a struggle.

The second officer ended up with cuts and scratches to her face, hands and body, and the department said she was also bitten on the finger.

At one point, at least one of them was punched, the VPD said.

A bystander, seen in the video, attempted to help the officers, and the suspect ran off. He was chased by other members of the VPD and a Taser was deployed, then he was taken into custody.

The man has not been publicly identified except as a 50-year-old resident of Vancouver.

Both the officers and the suspect were taken to hospital, and all were released. The man was taken to jail, and Vancouver police will be recommending charges, Addison said.