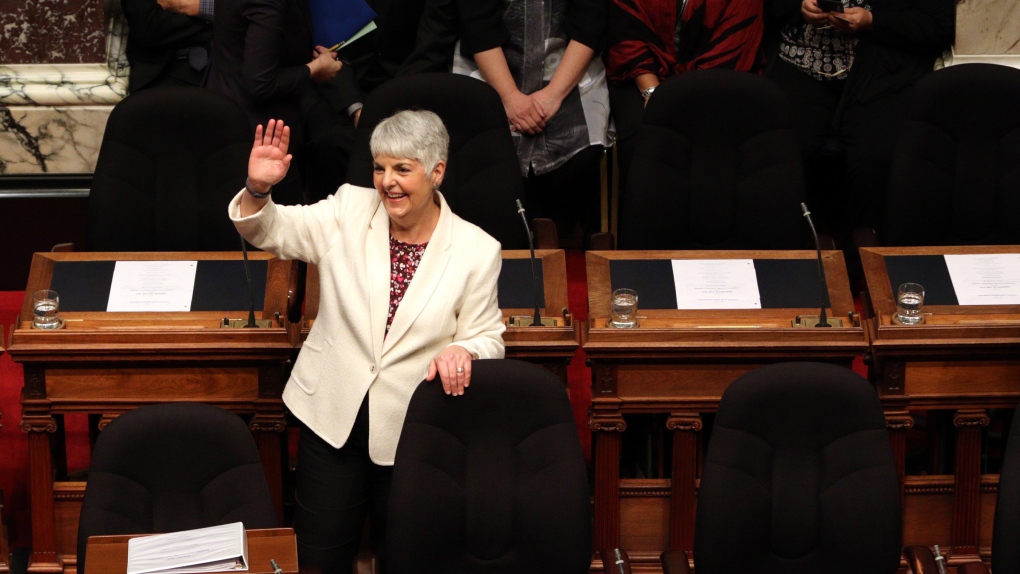 Finance Minister Carole James arrives to deliver the budget speech as she waves to people in the gallery at the legislature in Victoria, B.C., on Tuesday, February 19, 2018. THE CANADIAN PRESS/Chad Hipolito

VICTORIA - The B.C. government maintained its focus on providing programs to help families cope financially in its latest budget Tuesday, following efforts a year ago to crack down on property speculation in the housing market, bringing in a child-care plan and eliminating health-care premiums.

B.C. is forecast to have the highest economic growth in Canada in 2019 and 2020 at 2.4 per cent this year and 2.3 per cent next year. It has also had the lowest jobless rate in Canada for the past 17 months, she said.

“People were told by the past government they had to chose between a strong economy or investments in people,” James said in her budget speech. “The truth is we can and must have both.”

She said the minority NDP government's budget is “balanced both fiscally and in its approach.”

A spokesman for one of B.C. major business organizations said the budget numbers are credible, but investors would have liked to have seen more efforts to stimulate growth in the budget.

“We expected to see a bit of a spending-oriented budget from the NDP and I think they delivered on that,” said Jock Finlayson, vice-president of the B.C. Business Council. “It's a budget strong on the social side, but weak on the economic development side.”

Opposition Liberal Leader Andrew Wilkinson said the budget does nothing to stimulate the economy.

“The NDP don't really have a plan to make B.C. a better place,” he said. “This is a budget that's designed to take people for a ride.”

The budget includes a $400-million B.C. Child Opportunity Benefit that offers help to families with children up to 18 years old. James said the benefit, which starts in October 2020, provides up to $1,600 annually for families with one child, $2,600 for two children and $3,400 for three children.

James said the benefit will make a difference to many families who want better lives for their children.

“Too many people in our province are just a paycheque away from poverty,” she said. “When family budgets are squeezed, even a small setback can lead to a crisis. Too many people feel stuck, worried that life will never get better for their full potential.”

She said the government will increase social assistance payments by $50 a month, eliminate interest on student loans, raise support payments for children of foster parents and improve accessibility to disability assistance.

Eliminating interest on provincial student loans will save graduates an average of $2,300, “so they can start their careers off on the right foot,” James said.

The budget does not name the poverty reduction strategy that James highlighted before the budget, but said programs like the child fund, assistance rate increase and the elimination of student loan interest are poverty fighting measures. She said the government is preparing to announce its full reduction strategy in the coming weeks.

Some anti-poverty groups said they were looking for more in the budget.

She said the $50 social assistance increase is “far, far too low. We were hoping for a much more significant increase.”

Iglika Ivanova, the senior economist at the Canadian Centre for Policy Alternatives, said she saw the makings of the poverty reduction strategy but wanted to see more.

“For me it's there, but maybe not as ambitious a plan as you would have liked,” she said.

The budget does lay out the government's climate strategy that was introduced last December as Clean BC.

James said the $902 million Clean BC plan is the largest investment in climate programs in the province's history.

The climate plan will offer up to $6,000 on the purchase of a zero-emission vehicle, provide homeowners up to $14,000 for retrofits and switches to energy efficient heating, and $2,000 to replace fossil fuel home heating systems with electric heat pumps. Families are also eligible for a $400 climate tax credit this year, James said.

“We are reducing climate pollution by shifting homes, vehicles and businesses away form fossil fuels, towards clean electricity and other sources of renewable energy,” she said.

Green Leader Andrew Weaver said the budget has his party's influences on it, including the Clean BC plan and the move to eliminate student loan interest payments.

The budget also includes a $3 billion revenue sharing agreement with Indigenous Peoples over 25 years. James said the agreement to share provincial gaming revenue was reached after decades of talks.

“It's the right thing to do on the path to reconciliation,” said James, whose speech harkened to her upbringing in Victoria to emphasize the budget's theme.

“I saw first-hand that often, all it takes to change a person's life is an opportunity, paired with a hand-up,” she said.

“Those values of caring, of opening doors, of recognizing that everyone has something to contribute, of living within your means and sharing that you have; those are the values the people of this province expect from their government.”