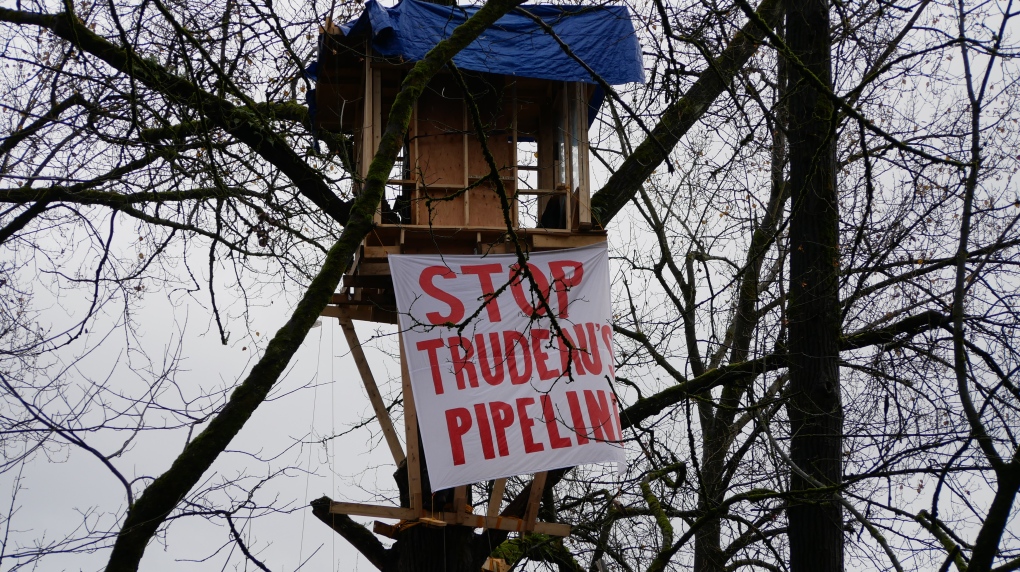 Anti-pipeline organizers completed construction of a treehouse in the path of the Trans Mountain Pipeline in Burnaby B.C. in November 2020.

VANCOUVER -- In yet another attempt to block construction of the Trans Mountain Pipeline, pipeline opponents have built a 25-metre high tree house located on the pipeline’s construction route.

The treehouse is located near the top of a tall cottonwood tree, at the Holmes Creek Resistance Camp, which is a forested area southeast of where the Trans-Canada Highway intersects with North Road in Burnaby.

“The treehouse is large enough to withstand a siege of months if necessary,” said Mayaan Kreitzman in a news statement for the camp.

The Trans Mountain Pipeline has faced years of opposition from citizens, environmental groups and several First Nations but is now said to be on schedule to be completed by 2022. The announcement of the treehouse protest plans comes a day after activists blocked railway tracks in Burnaby against the same pipeline.

“I built this treehouse for the love of nature, for the love of humanity, and both coming together in standing for what matters,” said Timothée Govare in a news statement.

“Treehouses are an analogy for humanity’s interdependence with nature: tree falls, human falls. I wanted to do my part to fight for all of us in a beautiful way,” he continues in the news statement.

A report released in October by the Canadian Centre for Policy Alternatives said the Trans Mountain pipeline expansion isn’t needed to meet oil capacity in Canada and recommended that Ottawa reassess the project. The centre reported that oil production, as forecasted by officials, can be met over the next ten years with existing pipelines.

The expansion project is designed to triple the capacity of the existing pipeline between Edmonton and a shipping terminal in Burnaby, B.C., to about 890,000 barrels per day of products including diluted bitumen, lighter crudes and refined fuels such as gasoline.

“There are people willing to stand in the way of this ecocidal pipeline all across this province,” said Christine Thuring in the news statement.

Thuring is a camp organizer and educator on urban ecological design.

“Canada cannot stand by its commitments to Indigenous land rights and climate action while ramming this through - it doesn’t make sense. People can come here and see for themselves what grassroots, citizen-led resistance can look like.”