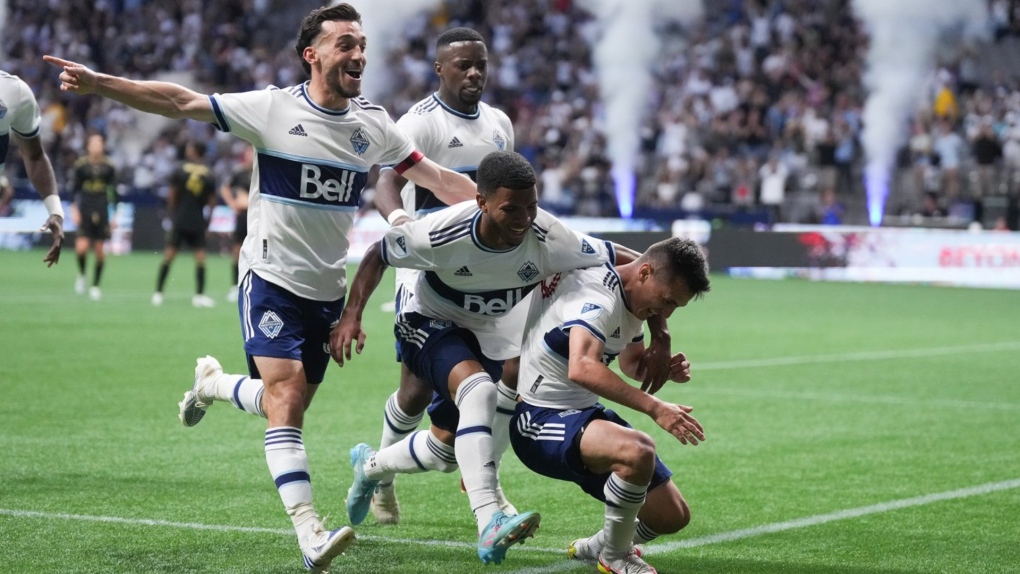 The Vancouver Whitecaps slayed a giant on Saturday.

The Caps came in below the playoff line in Major League Soccer's Western Conference, and seemed to be in tough as they hosted league-leaders Los Angeles FC, a team that has dominated nearly every club in its path this season.

While L.A. controlled play through much of the first half, Vancouver came on strong in the second. An 89th-minute goal from newcomer Andres Cubas gave the home side a crucial 1-0 victory.

After starting the season with a 1-6-1 record, the Caps have turned their campaign around, going 6-2-2 in MLS play since the beginning of May. The club has also won three rounds in the Canadian Championship and is set to face Toronto FC in the final on July 26.

“Unfortunately we started like, I don't know. I don't know,” Sartini said. “It looks like the coach was drunk maybe. We didn't start very well but we are now on a roll.”

Goalkeeper Cody Cropper posted his third straight clean sheet on Saturday. He now has four on the season and the Caps (7-8-3) have not conceded a goal in MLS play since June 14.

“I think the stats speak for themselves,” said defender Tristan Blackmon. “We've been in really good form lately. And we want to keep that momentum going that way. So it's really exciting.”

Vancouver outshot L.A. (11-4-3) 10-7 over the course of Saturday's game, including two shots on target. The visitors did not have a single on-target shot.

Cubas - a Paraguayan international who signed with the Whitecaps in late April - connected for the game-winning strike in the 89th minute, taking the ball off his chest at the top of the penalty area and sending a right-footed shot skittering past LAFC goalkeeper Maxime Crepeau.

“It was great that I stayed in that position at the top of the box,” Cubas said through a translator. “I thought the player would angle a pass to my right. So I made the movement to intercept the pass. And as soon as I got on the ball, I knew I had to do something with it. I saw the opening in the angle of the goal and thankfully it all worked out in the end.”

Crepeau, a former netminder for the Whitecaps, made a single save in his return to BC Place. Jeers and boos rained down on him nearly every time he touched the ball.

The 28-year-old Canadian started in 32 games for Vancouver between 2019 and 2021, but requested a trade ahead of the 2022 campaign due to what Caps sporting director Axel Schuster has described as a “very personal situation.”

“Some fans accept the fact that I moved on and some didn't,” he said. “They love their club so I totally get it.”

“I think it's nice to see BC Place crowded more than usual,” Crepeau added of the 18,292 fans in attendance. “My old teammates deserve all the support of the fans coming to the stadium. I think it was great to see the numbers going up because previous games it wasn't this way.”

The Whitecaps gained momentum late in the game and striker Brian White appeared poised to put the home side on the board in the 75th minute after a ball slipped through L.A.'s backline.

White streaked in alone and got a solid shot off, but sent the ball careening off the goalpost, prompting the American to bury his face in his hands.

Vancouver was the first side to put a shot on net, forcing Crepeau to make a highlight-reel save in the 65th minute.

White sent a cross into the box and Blackmon, a former LAFC defender, sent a blistering header toward the visitor's net, but Crepeau dove and snatched the ball out of the air.

“I just tried to get free in the box,” Blackmon said. “I saw Brian had a little bit of time so I tried to try to get it on target. There was a lot of people in there but hopefully next time it goes in.”

LAFC dominated 61.2 per cent of the possession through the first half and outshot Vancouver 4-2, though neither shot registered a single shot on target.

The Black and Gold had the better chances, though, including a header by Arango in the 31st minute.

A foul by Vancouver's Russell Teibert gave L.A. a free kick from the top corner of the penalty area. The initial blast didn't create much trouble, but it allowed Mamadou Fall to get a cross to Arango at the centre of the box and the Colombian sent a header just over the Caps net.

Arango came into Saturday's game having scored in his last four outings.

Latif Blessing nearly opened the scoring for L.A. earlier in the half. Francisco Ginella's shot was blocked by Caps defender Javain Brown in the 12th minute, but Blessing collected the loose ball and fired it from the top of the penalty area, only to see it glance off the crossbar.

Getting a third straight shutout shows how the entire Whitecaps team has been working together defensively, Blackmon said.

“We put up three clean sheets in a row. And that's really difficult, in this league especially,” he said. “It shows the determination of the guys in the back as well as the guys on the front. It's a cohesive thing. It's a group effort. And everybody's putting in really good shifts right now. And we want to keep that going.”

Both sides will be back in action on Friday, with the Whitecaps hosting Minnesota United and LAFC entertaining the L.A. Galaxy.

FOOT NOTES: Former Whitecaps head coach Marc Dos Santos also made his return to BC Place. Dos Santos was fired from his role last August and joined LAFC as an assistant coach ahead of the 2022 season. L.A.'s star forward Carlos Vela was not in the lineup. He played 90 minutes in LAFC's 3-1 win over FC Dallas on Wednesday.

This report by The Canadian Press was first published July 2, 2022.

Canada’s deputy attorney general says the Department of Justice had ‘no involvement whatsoever’ in the department’s review and delivery of documents to ongoing independent public inquiry into the 2020 mass shooting in Nova Scotia.

Quebec Cardinal Marc Ouellet is accused of sexual assault in documents tabled in Superior Court Tuesday related to a class-action lawsuit against the Roman Catholic Archdiocese of Quebec. The allegations against Ouellet are part of a series of claims made against clergy members that are included in two class-action lawsuits against the church that have been authorized by a judge.

B.C. man frustrated over wait after being approved for COVID-19 vaccine injury compensation

Parents of young children will need a prescription for over-the-counter fever and pain medication due to a shortage in pharmacies, Toronto's Hospital for Sick Children is warning.

Explosions and fires ripped through an ammunition depot in Russian-occupied Crimea on Tuesday in the second suspected Ukrainian attack on the peninsula in just over a week, forcing the evacuation of more than 3,000 people.