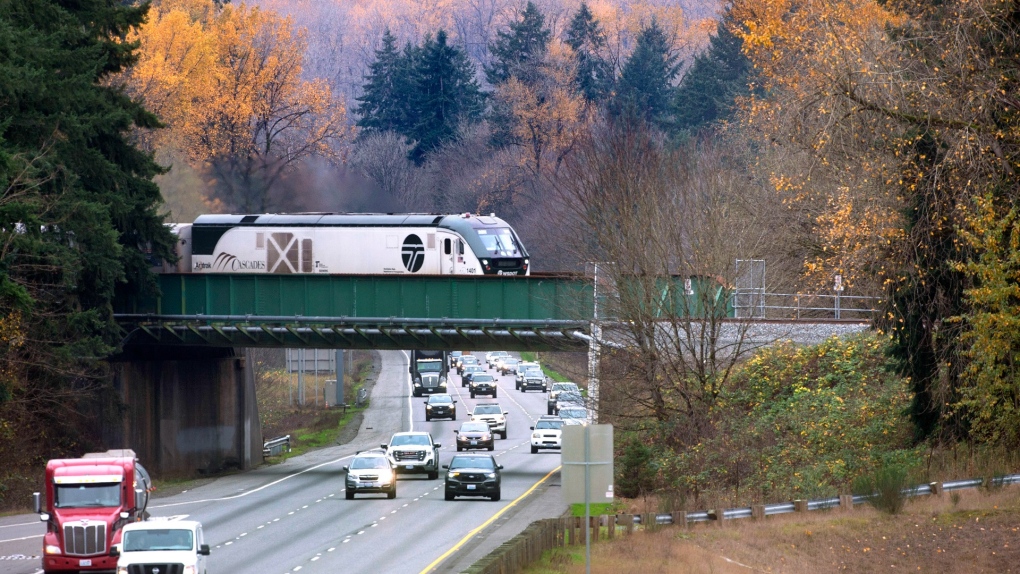 The northbound Amtrak Cascades train rolls across the Interstate 5 overpass in DuPont, Wash., on Thursday, Nov. 18, 2021. The overpass was the site of the fatal train derailment in December 2018. (Tony Overman /The News Tribune via AP)

A cross-border passenger train connecting Vancouver to Seattle has entered Canada for the first time in years.

Amtrak Cascades service to Vancouver was suspended early in the COVID-19 pandemic, but returned to the city Monday on a new schedule that includes a single daily round-trip.

One the way to Canada this morning!!! <3 pic.twitter.com/9FxfJxAElK

But travellers can't take the Cascades directly between Vancouver and Portland as they used to, at least for the time being.

It's unclear whether direct service from Vancouver to Portland will return. CTV News has reached out to the operator for more information.

Last month, Amtrak Cascades issued a statement promising a second daily trip to and from Vancouver would eventually be added when "staffing and equipment allow."

The train to Canada had some empty seats this morning. The way to get more train service is to fill the seats. Buy tix and tell your friends! Thank you!!! ❤️🇨🇦 https://t.co/3jDW2beNEJ pic.twitter.com/NmSP8rCmEi

Prior to the pandemic, about 159,000 people rode the Cascades between Vancouver and Seattle annually.

The service boasts "spectacular" views of forests and ocean, along with a bar car, hot food and free onboard Wi-Fi.

Alphonso Davies scored Canada's first men's World Cup goal, but the team has been eliminated from the tournament after a 4-1 loss to Croatia.

Protesters angered by strict anti-virus measures called for China's powerful leader to resign, an unprecedented rebuke as authorities in at least eight cities struggled to suppress demonstrations Sunday that represent a rare direct challenge to the ruling Communist Party.

A peer reviewed study assessing over 800 elderly women has found that flavonoids -- a naturally occurring substance found in beverages such as black and green tea -- could lead to notable health benefits.

Edmonton transit drivers are sharing images of what they are seeing on buses and the LRT on a sometimes daily basis in the hopes it will push the city to hire more transit peace officers.

The federal government has unveiled its long-awaited Indo-Pacific Strategy, which details a decade of plans for investment and partnerships in the region, and signals a tougher stance on China going forward.

Federal Health Minister Jean-Yves Duclos says the previously announced one million units of imported kids' pain relievers are starting to arrive on pharmacy shelves, while an additional 500,000 units have been ordered and are expected over the next few weeks.