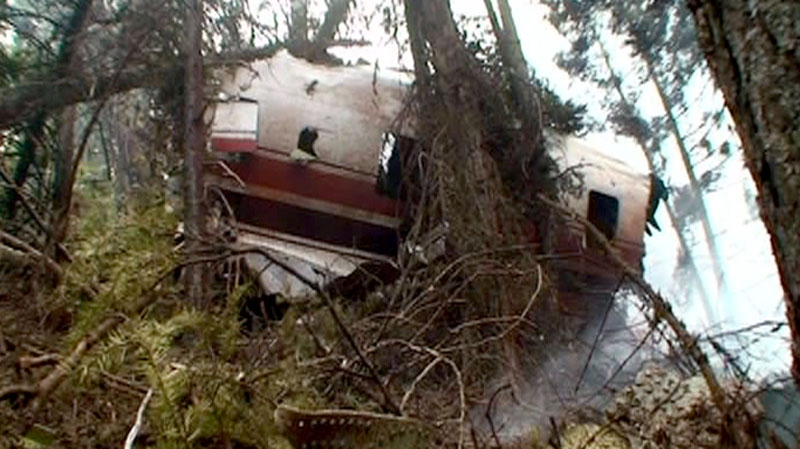 Officials have confirmed two pilots died in a plane crash after trying to put out a wildfire.

A veteran pilot from the Vancouver area and another from Edmonton were identified Monday as the two men killed when their waterbomber slammed into the ground while fighting wildfires in British Columbia's Interior.

"He's just been a great person to work with, certainly his family, colleagues and our customers are going to miss him," Pederson said of Whiting.

"I would say he was very passionate about flying and in particular the work that he did for our customers. All the pilots that work here are very dedicated to the mission. Tim was a leader in that."

Pederson said Whiting also had experience flying around the world, including working for a company connected to the United Nations.

He said Tilley was new to Conair, joining the company this past spring.

"He had many thousands of hours experience prior to coming to Conair," said Pederson .

The two men were piloting a Convair CV580, which was a former passenger plane that had been converted to an air tanker about seven years ago, said Pederson.

The plane burst into flames as it slammed into the ground, with the subsequent fire and steep terrain preventing rescue crews from reaching the wreckage. The RCMP and Conair confirmed Sunday that both pilots were dead.

The Transportation Safety Board has launched an investigation into the crash, although the agency hasn't speculated on what brought the aircraft down.

A TSB spokesman has said investigators hope crew aboard another aircraft that was shadowing the air tanker, a position known as the "bird dog," will be able to tell them more about what happened.

Conair has been fighting fires in B.C. and in locations elsewhere in the world for more than 40 years, according to its website, currently operating about 50 planes.

Conair hasn't had a fatal accident in about 20 years, said Pederson.

He said the weekend's fatal crash has affected the entire company, and he said Conair is offering counselling to the pilots' families and co-workers.

"It's a pretty sombre mood," he said. "People are coming to grips with it."

"On behalf of all British Columbians, I would like to extend our sincere condolences to the families of pilots Tim Whiting and Brian Tilley," said Bell.

"Fighting wildfires is inherently dangerous. This peril is matched only by the tremendous skill and bravery demonstrated every day by our firefighters and air crews."

The Conair waterbomber was the second aircraft involved in fighting the province's fires to crash in the past week.

Last Thursday, a helicopter battling a fire near Lillooet, about 340 kilometres northeast of Vancouver, crashed with two people on board. The 61-year-old pilot and the 27-year-old co-pilot were injured but survived.

A hot, dry fire season has created precarious conditions that have worsened in recent weeks, with new fires reported every day.

As of Monday, there were more than 350 fires burning across B.C., including at least seven considered to be dangerously close to people or buildings. Those seven fires, primarily in the Kamloops or Cariboo regions, had all prompted evacuation orders or alerts.

About 250 firefighters and fire specialists from Alberta and Ontario arrived in B.C. on Sunday, joining hundreds of firefighters that were already on the ground.

The province also brought in an additional 14 air tankers and bird dog aircraft from Alberta and the Yukon.

Since April 1, there have been 1,100 wildfires that have scorched nearly 6,000 square kilometres, according to the B.C. Forests Ministry's website. Nearly half of those have been caused by people.

A campfire ban has extended across about 70 per cent of the province, with violators facing fines from $345 to $1 million and up to three years behind bars.