VANCOUVER -- Vancouver resident and former Canadian Olympian Dave Campbell said Air Canada changed its story as to why his flight was delayed and then cancelled, and he’s now been denied the compensation he’s owed.

Campbell spent New Year's Eve in Mexico taking an 11 day vacation to escape the rain in Vancouver. He was booked to fly home from Cancun to Vancouver on Jan. 5 when he got a text alert from Air Canada saying his flight was delayed. The initial reason given was aircraft maintenance. 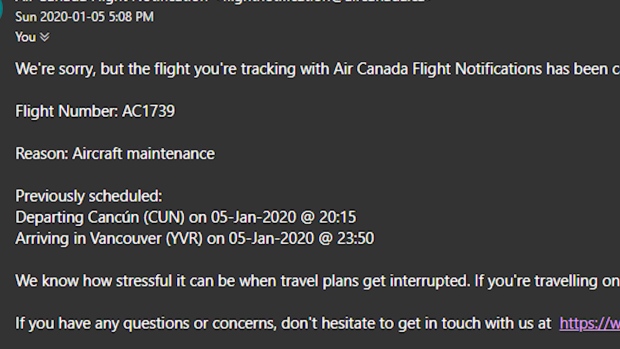 An email from Air Canada to Dave Campbell shows the reason for the flight cancellation as aircraft maintenance.

More alerts followed and his flight was eventually cancelled until the following day, so Campbell booked another night in his hotel. The final alert he received showed a different reason: this time the disruption was due to weather.

"That was totally wrong, because even the pilot on my new flight stated that the flight was delayed due to aircraft maintenance, so somebody is not telling the whole truth," Campbell told CTV News.

Under Canada’s new Air Passenger Protection Regulations, a delay of more than nine hours means the passenger is entitled to $1,000 compensation if the disruption is within the airline’s control.

Campbell made a claim, then said he got the runaround.

Not satisfied with the response, Campbell tried to call.

"I actually went on hold for three hours and finally got a hold of an Air Canada representative, only for them to tell me that they’re only a reservation service, and they couldn't provide me with any other number for a claims or anything like that. They just said 'oh there's no other number. We can’t help you.' It’s just so frustrating and they owe us that money."

In an emailed statement to CTV News, Air Canada said it intends to fully abide by the new protection regulations and that they are in contact with Campbell.

"We have put in place the necessary policies and procedures to ensure compliance. We deal with our customers directly and can confirm that we remain in contact with this customer regarding his recent travel claim," said the statement from Air Canada media relations.

"Air Canada has here a serious credibility problem, but it is not simply the problem of Air Canada. It is showing the weakness of the entire regime. This is how the new rules are falling apart exactly as we predicted," Gabor said.

He said the new legislation is too vague and airlines are using loopholes to determine what is and is not within their control.

"The solution would be to follow the European Union's model which is way clearer. In Europe, your flight is delayed or cancelled, the only reason for not paying compensation is if it falls under the extraordinary circumstances. Something like a major snow storm, like act of terrorism, like a volcanic eruption."