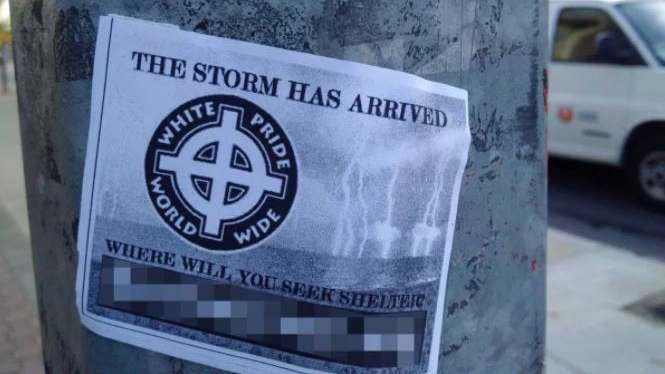 An advocacy group committed to countering anti-Semitism is speaking out after several posters promoting a white supremacist internet forum popped up outside a Burnaby library.

“These flyers have no place in Canadian cities where we celebrate diversity and acceptance,” Avi Benlolo, president of the Friends of Simon Wiesenthal Center for Holocaust Studies, said in a statement Thursday.

The posters promote Stormfront, a self-described white nationalist community of “racial realists and idealists” who claim to promote the interests and values of white people.

“The storm has arrived,” the posters read. “Where will you seek shelter?” The flyers also feature a “White Pride Worldwide” logo in the center.

Benlolo said “it’s up to the community to be vigilant in countering attempts by such groups to recruit people to their brand of intolerance and increase their visibility.” He is urging anyone who spots the flyers to contact local police.

Similar posters have surfaced in cities across British Columbia over the past year, including Vancouver, Victoria, Richmond and Abbotsford.

Last week, the FSWC spoke out against anti-Semitic flyers posted at the University of Victoria campus.

“(((Those))) who hate us will not replace us,” the posters read and provided URLs to white supremacist websites.

Triple parentheses are frequently used by neo-Nazis to refer to Jewish people. The group’s slogan itself is reminiscent of the one white supremacists chanted at a “Unite the Right” rally in Charlottesville, Va. that turned deadly in August.

The FSWC says it has reached out to Burnaby RCMP about Wednesday’s incident.