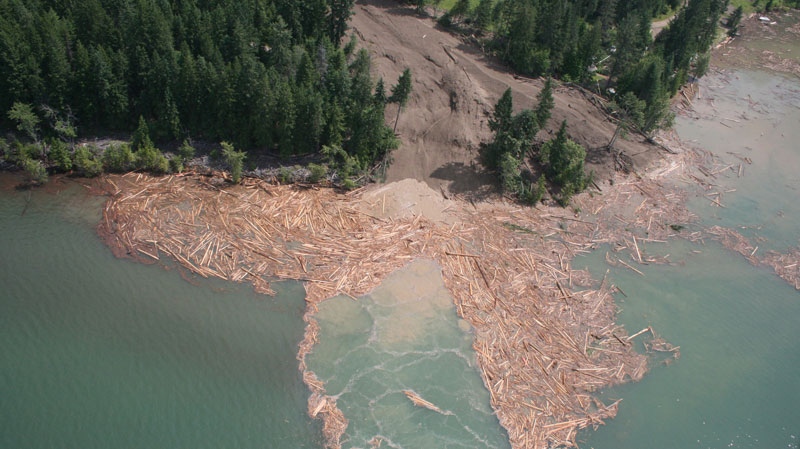 NELSON, B.C. -- A so-called act of God is allowing the province of B.C. to cut off compensation for residents whose homes were damaged or destroyed in the Johnsons Landing landslide.

An avalanche of mud and debris rolled over the tiny community of about 35 residents in southeast B.C. last July, wiping out five homes and killing four people.

The province has provided about $300,000 in disaster financial assistance so far and will provide about the same amount again to an undisclosed number of residents.

But David Curtis of Emergency Management B.C. said the government doesn't have to provide additional compensation because the province wasn't at fault for the slide.

A report released Thursday identified 18 properties that remain at risk for another potentially deadly slide, including five where the risk is considered very high.

Curtis said Friday that some residents have asked that the government purchase their homes, but he said there's no mechanism to be able to buy neighbourhoods that have been destroyed by disasters.

"Where the province does provide exceptional assistance is typically following an event that occurs where there's potential responsibility where the province could or should have taken action," he said. "That did not appear to be the case here."

The report said the slide was caused by heavy rain and a late-spring snowmelt that set off what was the largest slide to hit the region in at least 12,000 years.

"It's worth noting that it does appear to be an unpredictable event," Curtis said in a conference call with reporters.

"To my knowledge there was no up-slope work that would have caused this to happen. It appears to be an act of God."

But if such an event is so rare, Johnsons Landing homeowner Rachel Rozzoni wonders why government officials are fighting so hard to avoid paying compensation.

"All these little, stupid loopholes that they try to fit everybody into to not give them money is disgraceful," she said.

Rozzoni's home was spared. The slide came down on either side of her house taking out her neighbours' homes.

Neighbours on both sides were killed.

Valentine Webber, his daughters Rachel, 17, and Diana, 22, and German woman Petra Frehse were buried in the debris, setting off a rescue operation that was hampered by harsh weather and unstable conditions.

Many months later, Rozzoni is still fighting for what she said should be her rightful compensation.

The disaster assistance program will provide for 80 per cent of the assessed value of a home but not the land.

Rozzoni, 38, said the assessed value is far lower than the actual value, and there would be no compensation for the hectare of land she had to abandon.

She said her neighbours are feeling just as frustrated.

"Out of eight homes, they found a way to not help five of them at all. Not a penny. I mean come on. And the three that they're willing to help out, it's so little, it's a total joke."

Johanna Morrow, the manger of the recovery and funding unit at Emergency Management B.C., said officials are trying to apply the disaster financial assistance as liberally as possible.

The program will partially compensate those if the home is their principle residence and for those who lost their livelihoods or small businesses.

"The program is designed as emergency aid, it's not insurance, it is a helping hand. Within the limits of the legislation, we're providing assistance as quickly as we can."

Rozzoni did have insurance, but it didn't pay out either because the slide was considered an act of God.

She's also been told she won't get compensation until she removes her belongings from the house and has it bulldozed.

But that means she has to find a place to store her belongings, and pay for that storage, and that starts the cycle of need once again.